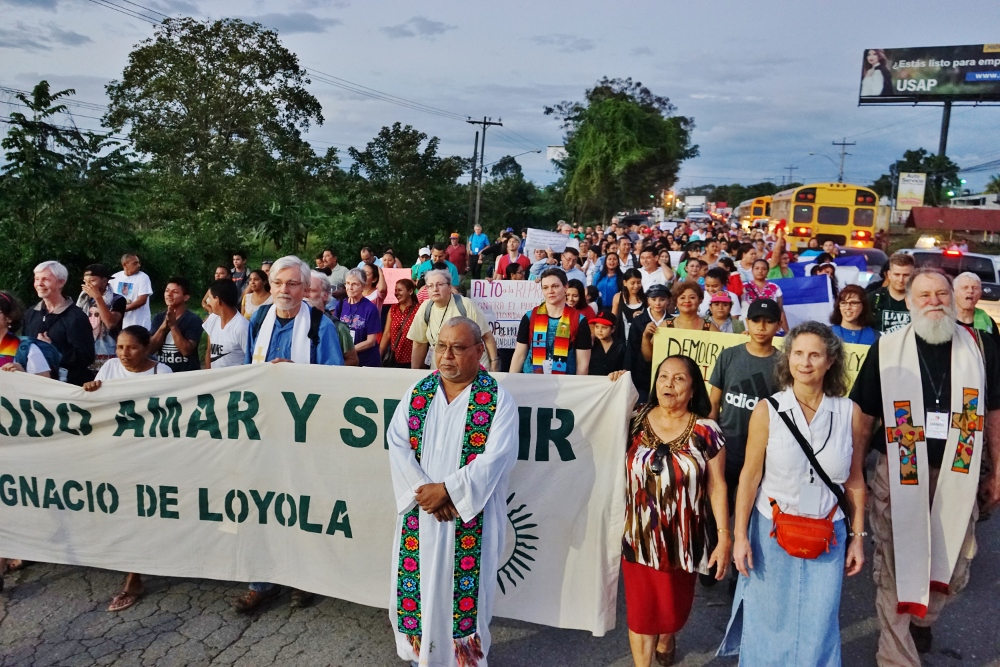 A six-person delegation from Honduras began a nine-city tour across the U.S. May 9-18 to raise awareness of the country's long-standing complicity in creating conditions that drive thousands of migrants seeking asylum from poverty and violence from Honduras to the U.S. Perhaps the most high-profile person among this group is Jesuit Fr. Ismael Moreno Coto.

In January 1989, Moreno — widely known as "Padre Melo" — was ordained in his hometown, El Progreso, Yoro, Honduras. Ten months later, Padre Melo learned of the brutal assassinations of his mentor, Jesuit Fr. Ignacio Ellacuría, and five confreres at the University of Central America in El Salvador, as well as housekeeper Elba and her daughter Celina.

For Padre Melo, their witness continued his lifelong trajectory of concern for the poor and marginalized in his native Honduras. He is no stranger to the violence often used to suppress his fellow Hondurans in their quest for a better life. When he was a teenager, his father, a union activist, was murdered by an assailant who has never been found.

Since 1989, Padre Melo has dedicated himself to a variety of projects intended to accompany the poor in his native country as well as raised challenging questions exploring the root causes of the endemic poverty. He started Socorro Jurídico, a legal clinic in Aguan that advocates for rural peasants. He also co-founded ion the same year A Mecate Corto, a monthly Honduran journal that provides commentary on current events affecting Honduran peasants and indigenous people. He became its editor in 2001.

Most important has been his ministry at Jesuit-owned Radio Progreso, one of the few independent media voices in Honduras. Padre Melo has been the director of the radio station since 2006. Based in El Progreso, the station broadcasts its transmissions in nearby San Pedro Sula and the Honduran capital of Tegucigalpa to an estimated audience of 1.5 million people.

In 2001, Padre Melo founded a companion project of Radio Progreso — Equipo de Reflexión, Investigación y Comunicación (ERIC), which provides grassroots investigation and reporting of the many forms of injustice and violence that plague Honduran activists and peasants working to reform the political and economic structures that stifle the development of the country's poor and marginalized people.

ERIC plays an important role in researching and conveying news to its listeners on issues such as:

Explosive conditions in Honduras have festered following a 2009 coup d'état led by conservative political and economic interests in the country. President José Manuel Zelaya Rosales, a popularly-elected rancher who sought to make basic changes improving the conditions of poor Hondurans, was forcibly removed from power with the tacit support of the United States. Radio Progreso criticized the coup d'état and was occupied by the Honduran military and temporarily forced off the air.

Since the coup d'état, a variety of political decisions and policies has combined to increasingly congeal political power in the hands of the Honduran president. Perhaps the most odious change included a manufactured 2015 Supreme Court decision to rescind a clause in the Honduran constitution which forbade a president from running for re-election without the expressed consent of the electorate.

Last December, Juan Orlando Hernández — popularly reviled as JOH — claimed re-election as president following a passionately disputed election. The opposing candidate, Salvador Nasralla, was ahead by a margin of 5 percent of the vote following the close of the presidential election on Nov. 26, 2017. Statisticians and pollsters claimed his lead was insurmountable. Two days later, the computer system tabulating the ballots suddenly crashed. By the time it was restored 36 hours later, Hernandez had mysteriously vaulted into the lead.

The Organization of American States (OAS) and European Union (EU), which monitored the election, declared there was no reasonable way the integrity of the voting system could be assured and called for a new election. Nevertheless, Hernandez and his party declared themselves victors. Despite the warnings of the OSA and EU, several countries — including the United States, Guatemala, Mexico and Israel — immediately congratulated Hernandez on his victory.

In the ensuing weeks, Radio Progreso regularly reported on the national upheaval. Over 30 people were killed by government forces, and more than 2,000 Hondurans were imprisoned for protesting. One of the station's radio antennas in Tegucigalpa was also sabotaged in late December.

Padre Melo, who is accustomed to threats against his life, suddenly saw new public allegations made against him. At least three separate flyers posted his picture, with accusations of his being a terrorist and a member of a drug cartel. One labeled the Jesuit a member of "the axis of evil."

In response, the Jesuits of Central America and the Caribbean published a letter to the Honduran government warning that if any harm were to come to Padre Melo, the government itself would be held accountable. Amnesty International issued an urgent action response to protect Padre Melo and other Hondurans engaged in the post-election crisis. In January, a 50-person delegation of U.S. religious and lay leaders spent six days accompanying Padre Melo and met with U.S Embassy Chargé d'Affaires Heide Fulton and embassy staff to express their concerns about his safety and overall conditions of human rights in Honduras.

Related: In militarized Honduras, delegation speaks truth to power to US Embassy

Padre Melo is widely known for his work as a staunch defender of human rights. He has spoken in Europe and Canada and before the Lantos Committee on Human Rights in the U.S. Congress about human rights conditions in Honduras. In 2015, he was awarded the Rafto Prize, named after a Norwegian human rights activist. He was also a close friend of environmentalist Berta Cáceres who was assassinated in 2016. Students at the National University of Honduras called on Padre Melo in 2016-17 to mediate their grievances against the university. The students were protesting the growing privatization of education and the lack of student participation in the university setting.

Padre Melo and the five Honduran activists who are joining the tour will reunite in Washington, D.C., on May 17-18 for "Day of Prayer and Action for Honduras." They hope to meet with sympathetic congressional representatives to offer a number of suggestions on how the U.S. government can play a constructive role in promoting human rights in Honduras.

A rally will be held May 17 to call attention to the drastic need for reform in the country. Following the Day of Prayer and Action for Honduras, several other delegates will accompany Padre Melo and the five activists back to Honduras.

[Tom Webb is a freelance journalist. He was among the 50-person U.S. delegation that visited Honduras in January as part of an effort to protect Padre Melo and Honduran activists.]