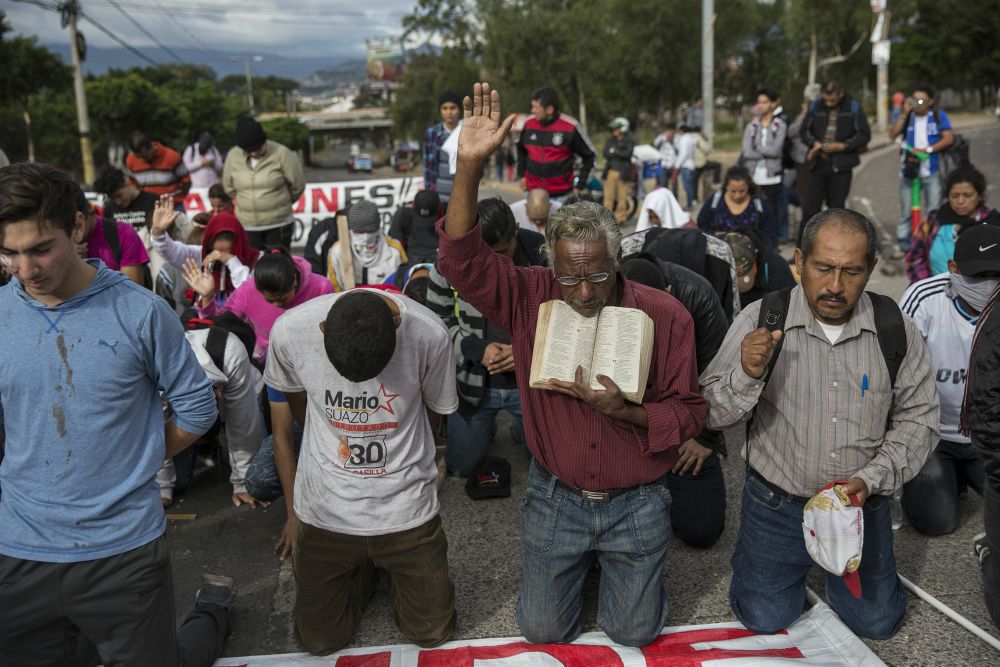 Supporters of Libre Alliance presidential candidate Salvador Nasralla kneel in prayer during a protest outside the National Institute of Professional Training, where election ballots are stored, in Tegucigalpa, Honduras, Nov. 30, 2017. (RNS/AP/Rodrigo Abd)

The Trump administration's recognition of Honduras' incumbent right-wing president as the winner of a hotly contested election riddled with allegations of fraud is likely to create blowback in 2018, when at least five Latin American nations hold elections.

In congratulating Juan Orlando Hernández as the victor Dec. 22, the Trump administration ignored both the findings of poll observers and the calls for a new election by the Organization of American States, members of Congress and the opposition Honduran Alliance Against Dictatorship party.

Alliance party candidate Salvador Nasralla — who has charged Hernández and his National Party of Honduras with rigging the Nov. 26 election and then imposing martial law to stifle protests — denounced the Trump administration for legitimizing a regime rejected by the majority of Honduran people. He said he's formally challenging the results, but was open to another election.

Former Honduran president Manuel Zelaya, the coordinator of Nasralla's coalition party, wrote in an open letter to the American public that the U.S. administration "has installed a dictatorship" in Hernández, who "uses terror tactics to oppress his own people."

U.S. tax dollars, said Zelaya, who was overthrown by a U.S.-backed coup in 2009, "are used to finance, train and run institutions that oppress the people, such as the armed forces and the police, both of which are well known to run death squads … and which are also deeply integrated with drug cartels."

The letter urged Trump to suspend all security assistance to Honduras and join Organization of American States' call for new elections.

The organization had commissioned Irfan Nooruddin, a professor at the Walsh School of Foreign Service at Georgetown University, to analyze the disputed election results.

Nooruddin's seven-page analysis concluded: "I would reject the proposition that the National party won the election legitimately."

His conclusion coincided with reports on how Nasralla's early lead mysteriously disappeared. The day after the Nov. 26 election, the Supreme Electoral Tribunal, controlled by Hernández's national party, reported Nasralla was winning with almost 60 percent of the vote counted. One of the four tribunal magistrates, Marcos Ramiro Lobo, said his lead was "irreversible."

The announcement set off celebrations across the country, but they were short lived. The tribunal inexplicably stopped reporting the returns for more than a day, and when it resumed, Nasralla saw his 94,000-vote lead had been cut in half. The next day, Hernández emerged as the top vote getter, and Lobo called for an independent audit.

On Dec. 17, after receiving Nooruddin's report, Organization of American States Secretary General Luis Almagro said that election observers were reporting that "serious doubts persist about the results," and he asked that no "irresponsible pronouncements" be made before they could finalize their reports.

But within hours, the tribunal pronounced Hernández the winner.

Almagro, in turn, issued a statement saying it was impossible to determine a winner, given that there was "deliberate human intrusion in the computer system; intentional elimination of digital traces; the impossibility of knowing how many times the system was breached; ballot cases open or without ballot tallies; extreme statistical improbability regarding participation levels."

"The only possible way for the victor to be the people of Honduras," he said, "is a new call for general elections."

The Trump administration's refusal to join the call for a new election and its rush to legitimize Hernández's reelection had been foreshadowed by Secretary of State Rex Tillerson.

Just days after the contested election, Tillerson certified that the Honduran government has been combating corruption and supporting human rights, paving the way for Honduras to receive millions of additional U.S. dollars.

The certification and its timing outraged human rights groups and members of Congress, given the level of government corruption and the number of assassinations of environmentalists, indigenous leaders and journalists extensively documented earlier this year by two major studies.

In its January report, the London-based watchdog organization Global Witness called Honduras the deadliest place on the planet to be a land or environmental activist. The Hernández government has yet to prosecute the killers of the country's most prominent activist, Berta Cáceres, who spearheaded efforts to stop the plundering of indigenous lands by hydroelectric, mining and logging interests.

On May 30, the Carnegie Endowment for International Peace issued its Honduran report, "When Corruption is the Operating System."

It described the workings of "transnational kleptocratic networks" and characterized the Honduran military as "an instrument for the consolidation of power," used to patrol indigenous communities, suppress protests, curtail the exercise of free speech, and, "most broadly (via Hernández's new Military Police for Public Order), to assume a wide variety of domestic security and policing roles."

Almagro, previously praised by the U.S. for sharply criticizing leftist leaders trying to remain in power, did not comment directly on the U.S. ignoring his call for new elections or on its recognizing Hernández as the victor.

But his office issued a statement warning that its election observers found "a series of irregularities and serious deficiencies that surely affected the election results," and that to dismiss these reports "sets a dangerous precedent in the face of the many elections to be held in 2018."

Costa Rica, Paraguay, Colombia, Mexico, and Brazil have elections scheduled for the coming year, while another six — Bolivia, Argentina, Uruguay, El Salvador, Panama, and Guatemala — will hold elections in 2019.

The Trump administration's recognition of Hernández came one day after Honduras became one of only eight countries to vote with the U.S. against a U.N. resolution denouncing Trump's recognition of Jerusalem as Israel's capital.

The U.S. recognition of Hernández also ignored the fact that the Honduran constitution forbids re-election.

The ban was the stated reason Hernández's national party orchestrated the overthrow of Zelaya in a U.S.-backed coup in 2009, although Zelaya had only proposed holding a nonbinding referendum on whether to change the ban.

Hernandez, who won the 2013 election campaigns amid charges of voter fraud, created a storm when declaring his candidacy for re-election. He had stacked the Supreme Court with cronies who suspended the constitutional ban against reelection, a ruling opponents said was illegal since such a change required a vote of the people.

Hernández's bid for another term was even condemned by Gen. Romeo Vásquez Velásquez, the former head of the Honduran military and graduate of the U.S. Army's School of the Americas, who had led the coup ousting Zelaya.

The U.S. recognition of Hernández and its snubbing of the Organization of American States "demonstrates once again how hollow US government rhetoric on supporting democracy in Latin America often is," Dan Beeton, International Communications Director for the Center for Economic and Policy Research, told NCR.

Once again, "the U.S. has weighed in with unqualified support for a corrupt authoritarian regime," he said. "The scene has been set, in part through this State Department move, for a period of turmoil and instability. Certainly, Hernández will see little reason to negotiate with the opposition alliance or with the thousands of people in the streets."

When considering Hernández's militarization of the police and his embracing a large U.S. role in the training of Honduran security forces, this decision should come as little surprise, he said, as the top priorities for the U.S. are maintaining its "military presence at Soto Cano (Air Force base) and in ensuring Honduras serves as a source of cheap resources and low-paid labor."

The U.S. has disregarded the fact that the Honduran constitution forbids foreign military bases on its soil, just as it ignored the constitutional ban against re-election.

"We know it's the U.S. that runs Honduras," Nasralla told the Financial Times Dec. 22. And it is "co-responsible," he said, for the human rights violations and fatal shootings that have occurred since the election.