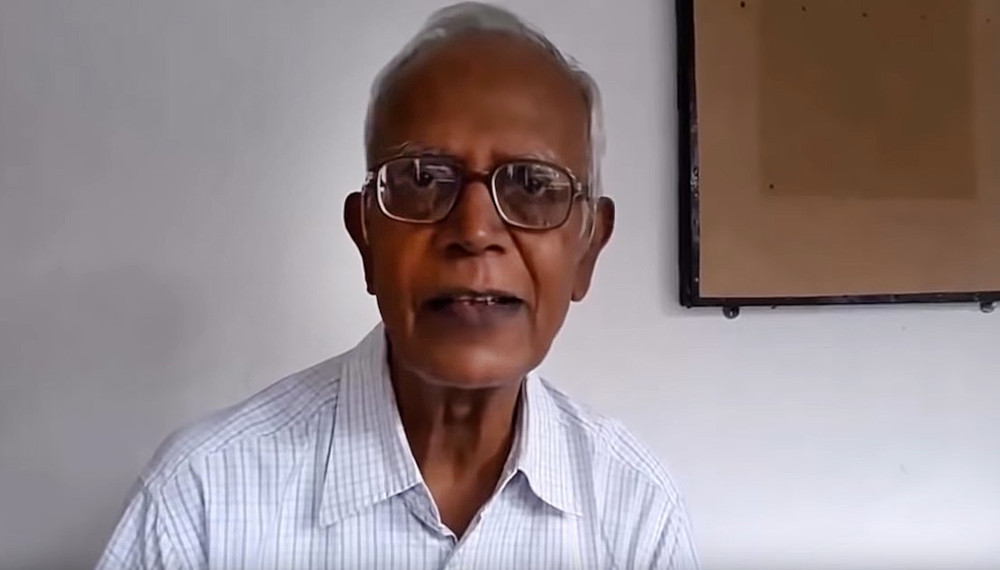 Jesuit Father Stan Swamy, 83, who has worked for tribal rights in India, has been arrested and placed in judicial custody until Oct. 23, 2020. The priest's arrest on terrorist charges has triggered protest in many parts of the country and an international outcry from the Jesuits. This screenshot is from a video he made before his arrest. (CNS screenshot/YouTube)

A special court in Mumbai has placed Jesuit Fr. Stan Swamy, a tribal rights activist, in judicial custody until Oct. 23 amid protests in many parts of the country.

Officials of the National Investigation Agency, which probes terrorism-linked activities, arrested the 83-year-old priest Oct. 8 at his residence at Bagaicha, a Jesuit social work center in the outskirts of the Ranchi, reported ucanews.com. Officials arrested him for alleged links to outlawed Maoist rebels, which the Jesuits and Indian rights activists say are trumped-up charges.

"We are consulting lawyers to move the appropriate court for his bail," said Jesuit Fr. Davis Solomon, a colleague of Swamy.

A statement from the Jesuits' Social Justice and Ecology Secretariat noted that, two days before his arrest, Swamy released a video explaining his fight for tribal land rights. He said he had been interrogated by police for 15 hours over five days this summer.

"What is happening to me is not something unique happening to me alone. It is a broader process that is taking place all over the country," Swamy said in the video. "We are all aware how prominent intellectuals, lawyers, writers, poets, activists, students, leaders, they are all put into jail because they have expressed their dissent or raised questions about the ruling powers of India."

The Catholic Bishops' Conference of India said Swamy served "the tribals and the downtrodden," working "to protect their rights ... especially their land rights."

"It is difficult to comprehend the plight of an octogenarian with several morbidities" having to undergo "such difficulties during this pandemic" when traveling is a risky even for healthy people, the bishops said, appealing for his immediate release.

NIA officials told media that their investigations since August 2018 have established that Swamy was actively involved in the Maoist rebels' activities.

Swamy and church officials have consistently denied charges, maintaining that they are fabricated to silence the priest, who has worked for tribal peoples' rights.

The priest, whose birth name is Stanislaus Lourdusamy, is accused of being party to a conspiracy that led to a violent clash in Bhima Koregaon Jan. 1, 2018. One person was killed and several others injured.

Indians are decrying the jailing of the elderly priest and seeking his release.

In Ranchi Oct. 10, hundreds of tribal people demanded the priest's release, holding placards and shouting slogans. Some 2,000 social activists from across the country condemned the priest's arrest in a statement and said the move was an attack on all those working for human and constitutional rights in Jharkhand state, of which Ranchi is the capital.

Church officials in Jharkhand also appealed for the release of the priest, who underwent surgery recently.

"The church in Ranchi appeals to the conscience and compassion of all concerned authorities and all those who have a say in this matter to release Swamy immediately and restore him to his own residence," said a statement signed by Ranchi Auxiliary Bishop Theodore Mascarenhas and Sr. Punam Soreng, secretary of the Catholic religious of India's Ranchi unit.