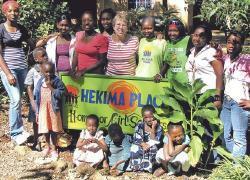 Kate Fletcher, center, with some of the girls of Hekima Place (Richard Roesel)

Kate Fletcher’s story is both ordinary and extraordinary. As she admits, everything in her life prepared her for what she is doing now: operating a home for orphaned girls on the outskirts of Nairobi, Kenya. Through the efforts of this 70-year-old widow from Pittsburgh, the power of one is becoming the power of many, helping Kenyans -- especially girls and women -- help themselves.

Hekima Place, the home Fletcher founded in 2005, acts on what international agencies have begun to acknowledge: To invest in girls, especially in their education, is to invest in the community.

As a young girl herself, Dorothy Kane, as she was known then, lived for four years in a Catholic orphanage in Philadelphia when her father left her family and her mother was unable to care for her. After she finished high school, she became Sr. Kathleen, a member of the Sisters of the Divine Redeemer, working as a teacher and medical technologist. During 22 years of religious life she earned an undergraduate degree in education and a master’s degree in public health and taught as a university lecturer. She left the convent at age 40, and seven years later she married Leonard Fletcher, a widower dentist and fellow Catholic.

When her husband died after 16 years of marriage, Kate Fletcher’s life circumstances permitted her to fulfill a lifelong dream -- to go to Africa.

It was the search engine Google that served as her guardian angel. Typing in the words “Africa,” “AIDS orphans” and “volunteer” she was lead to Nyumbani, a children’s home for AIDS orphans outside of Nairobi, founded by Jesuit Fr. Angelo D’Agostino. Fletcher sold her house and left to work as a volunteer for two years at Nyumbani.

Kenya, once the jewel of Africa, has become in popular imagination a place of despair. It has one of the world’s highest incidences of HIV/AIDS, some 2 million orphans, severe economic problems resulting from years of drought, widespread corruption, and over 1, 000 dead and hundreds of thousands displaced by the violence of last year’s disputed presidential elections. Although statistics can distort, in this case they do not. Life expectancy in Kenya has declined from 60 years in 1990 to 53 years in 2005; unemployment is at 40 percent, and tourism revenue dropped 32 percent in the first six months of 2008 against the same period the previous year.

As Fletcher came to understand the needs of Kenya’s orphans, she decided to establish a new venture, a home for girls, not those suffering from AIDS but those who had experienced the loss of parents. Because they were not ill, they were excluded from residences for infected children; nonetheless, they experienced the same trauma as other orphans. Food, shelter and the most rudimentary access to health care are imperiled without adult care and advocacy. Without parents, orphan children often have to take on the care of siblings and are forced to leave school in order to work. Some become scavenger street children in the huge slum of Kibera. Girls are subject to increased incidence of sexual exploitation and are more vulnerable to becoming HIV-infected. In Kenya, girls are three times more likely to have HIV than their male counterparts.

What Fletcher knew was that a girl’s education involved more than mere access to education; it meant inspiring, supporting, encouraging girls to believe in themselves and to desire to realize their potential. With the support of friends and members of several churches she set to work.

In 2005 she opened Hekima Place (“Hekima” means wisdom in Arabic), a home for 10 girls. “Mum Kate,” as she is known, is now chief dreamer, organizer, fundraiser and director of a large female family dedicated to the proposition that given safety and access to food, shelter, health care and education these girls would flourish. She took as inspiration the life of Kenyan Nobel Prize winner Wangari Maathai, environmentalist and defender of orphans. Fletcher created a registered nonprofit, established a board of directors, and hired several Kenya staff, other “mums” who supervise the girls when they are not in school.

Today, Hekima Place provides a home for 53 girls who range from preschool to college age. Although the physical environment is modest and orderly, its ethos is lively. Mum Kate and her staff know that academic progress builds on a constellation of psychological factors. The ordering of the day, the rituals developed, and the expectations established all work to encourage the full development of these girls. References to Abraham Maslow’s hierarchy of needs and Erik Erikson’s stages of human development pepper Kate Fletcher’s conversation. In a multitude of practical ways she has found opportunity to convince these girls that they are academically able, valued and responsible for their lives.

The day begins with prayers, breakfast, and then transport to nearby public and private schools. When the girls return there are chores to be done, like working in the garden and caring for the younger children, dinner to be eaten, and mandatory study hours for those enrolled in school. Naturally shy girls are encouraged to speak in a firm voice, to look others in the eye, to talk out problems at weekly house meetings, to express gratitude for the good things of life, to discuss topics at the dinner table. A celebration is held for each girl’s birthday and her peers regale her with tales of why they appreciate her. Academic achievement is acknowledged at every opportunity. Play is encouraged among younger children. Dramas are created and performed. Friday and Saturday nights are given over to movies and club activities, and on Sunday mornings the girls are trundled off, depending on their affiliation, to nearby Pentecostal, Anglican or Catholic churches.

These 53 girls are fortunate, and they know it. Although Hekima Place is a happy, lively environment, there is a seriousness of purpose that is palpable among the girls who, when they become teens, commit to a covenant promising not to drink alcohol or home brews, take drugs, smoke cigarettes, steal, lie or engage in sexual activity. This is the practical application of Hekima Place’s core values of integrity, prudence, wisdom and compassion. Thus far only two girls, both taken in at age 15 and unable to meet the requirements of the covenant, have been asked to leave.

The girls at Hekima Place represent nine of the 42 ethnic groups of Kenya. The names of these groups are inscribed across the front of the main building along with words from Kenya’s national anthem: “Justice be our shield and defender. May we dwell in unity, peace and liberty.” These lofty aspirations run counter to the ethnic tensions that are under the surface in Kenyan society and exploded in last year’s violence. But Hekima Place attempts to inculcate a solidarity around academic achievement and individual responsibility that mutes these divisions.

Fletcher is the first to acknowledge that the power of one is dependent on others. Initially Hekima Place was funded through her own savings and contributions of friends and members of churches in the Pittsburgh area. She subsequently secured grants from four foundations: Nathan Cummings, Dominica, Pittsburgh and Vista Hermosa, and has attracted donors from the United States, the United Kingdom, Canada, Italy and Kenya. Hekima Place recruits volunteers to work for short stints, relying on them to be ambassadors on their return, and “big sister” and sponsorship programs to adopt each girl, writing to her and remembering her with gifts on her birthday and at Christmas.

Fletcher has secured training for the staff to take greater responsibility for accounting, programming and personnel supervision. Although she is omnipresent, her principal task is to serve as lead fundraiser and contact person. Her insistent hope is that through Hekima Place these girls will augment the ranks of women in the judiciary, the legislature and the boardrooms of Kenya, ensuring a future in which children are protected, justice is done and peace prevails. These are no mean aspirations.

Recently two developments have occurred that portend well for Kenya’s girls: The government has established universal, free primary education, and the incidence of AIDS is declining. In the meantime, the power of one remains. As it garners support it becomes the power of many, realizing Kenya’s national motto: Harambee, “Let us all pull together.” The future of the nation’s youth, particularly its girls, depends on it.

Dana Greene is dean emerita of Oxford College of Emory University in Atlanta.