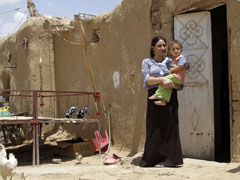 An Iraqi refugee hold a child outside her house near Hasska in northern Syria June 18, 2010 (CNS/Reuters/Khaled al-Hariri)

AMMAN, JORDAN -- For almost five years now, Ekram Muqdad Aboes has lived in Jordan, scratching out a living as best he can. A photographer, cameraman, graphic designer and actor, the 25-year-old Iraqi refugee left his home in the city of Nainawa in northern Iraq when his 15-year-old brother and 13-year-old sister were murdered after they telephoned the U.S. Army to report seeing a bomb.

His parents are internal refugees inside Iraq, and Aboes said he doesn’t have their telephone number and hasn’t spoken to them for a year. In Jordan, as in most host countries, refugees have few opportunities for legal employment. Aboes has a part-time job at a TV station. It helps, but not enough; he’s taken out loans from neighbors and friends.

Grateful for the safe haven Jordan has offered him, Aboes says he dreams of moving to America. Returning to Iraq is out of the question: “The threat is greater than nostalgia,” he said. He applied for a visa to go to the United States when he came to Jordan. Five years later he’s still waiting for a response.

An estimated 400,000 to 500,000 Iraqi refugees live in Jordan. More than twice that live in Syria. Many of the refugees share Aboes’ dream of America, even those who blame the United States for creating the conditions in Iraq that forced them to leave. Like Aboes, many are living on little more than hope. Guests of their host countries and unable to work except unofficially, which means bad jobs at bad wages, they survive on savings if they have any, take whatever work they can get and wait for resettlement to a third country that will have them.

The number of countries accepting refugees for resettlements is dwindling, however, as are funds supporting Iraqi refugee operations.

“We do not expect that the same funding levels will be upheld this year, 2012 and beyond,” said Marina Aksakalova, a spokeswoman in Damascus for the United Nations High Commissioner for Refugees. With funding levels going down and no new donors stepping in, the agency is by necessity adjusting its programs and prioritizing needs, she said.

The world’s attention has shifted to other areas, yet most of the Iraqi refugees have not. They remain stuck in transit, guests in a country not their own, without jobs, rights or a future, even as more refugees continue to arrive.

“There are still refugees coming from Iraq. Every day. And especially Christians and minorities,” said Vivian Manneh, emergency regional manager for Catholic Relief Services, which works with Caritas Jordan and local churches to provide assistance to refugees in Jordan and Syria.

Few refugees are returning home to Iraq. Violence, lack of basic services, and high unemployment keep Iraqis from repatriating. A UNHCR survey found that 95 percent of Iraqi refugees do not wish to return. A study by the International Catholic Migration Commission of refugee expectations found that none interviewed thought Iraq would stabilize in their lifetime.

“Security incidents are down, but there are still more security incidents in Iraq than there are in Afghanistan and Somalia combined,” said Jana Mason, a spokeswoman with the Washington office of the U.N. refugee agency. “That’s one factor in people’s decision to return home. It’s also a question of what they are going home to. There’s a severe shortage of housing. Many don’t have housing to go back to or jobs.”

“The Europeans are saying we have our share and we can’t take any more. Part of it is the economic situation. Part of it is that they believe this problem was not created by them,” Manneh said.

Refugees running out of money, aid organizations running out of relief funds, diminishing opportunities for resettlement, host countries burdened by many years of caring for refugees -- it looks like an intractable and worsening problem.

“It’s a crisis and an underreported crisis,” said Bob Carey, vice president for migration and refugee resettlement at the International Rescue Committee. “There’s a perception that things are improving for refugees, and it’s really not the case. There’s been a further deterioration.”

“There is no exit strategy for these refugees living outside Iraq,” said Manneh. “If the U.S. troops leave by the end of this year, what is going to happen to the Iraqis in general and the refugees in other countries? Are they going to stay in a limbo situation? The countries that they are in do not want to repeat the Palestinian refugee issue.”

Jordan and Syria have been very welcoming of the refugees, Iraqis and relief officers say. Social adaptation has been relatively easy, and both countries have provided schooling and other services, but in Syria in particular the presence of such a large numbers of refugees is putting a strain on the society.

“I hate these Iraqis. They are ruining the economy,” one Syrian said of the refugees. “The rich Iraqis are driving up the price of real estate and the poor Iraqis take jobs at a low wage that would otherwise go to poor Syrians.”

“Syria has received little foreign assistance and this is draining very heavily the Syrian economy, and this is a major stress on the Syrian education system and health care system,” said Murhaf Jouejati, professor of Middle Eastern studies at the National Defense University in Washington. “As a result of their being there a long time, and the refugees’ saving beings depleted, you’ve an emerging phenomenon of prostitution and the social disease and criminality connected with that.”

Most refugees do not want to settle in Syria and Jordan. According to the U.N. study, 87 percent of refugees in Syria and Jordan wish to be resettled in a third country rather than remain permanently in those two host countries. The overwhelming preference is for resettlement in the United States or Europe, where refugees think they will be safe and can offer their children a better future.

In the interim, Iraqi refugees in Jordan, Syria and elsewhere survive as best they can on their own or with the aid available to them. For most refugees, aid comes in the form of food allotments handed out every two months by the U.N. refugee agency. Depending on family size and needs, some refugees get assistance with rent. Other programs target those with special needs, the chronically ill, or families headed by single women.

Only a fraction of the refugees register with the U.N. High Commissioner for Refugees and apply for assistance, however. “People get by in a seat-of-the-pants way,” said Theresa Kubasak, cofounder, with her husband, of the Iraqi Student Project in Damascus, which helps young Iraqis in Syria get a higher education in the United States.

Money for rent and medical treatment are the most urgent needs of the refugees. Some 20 percent of those registered with the UNHCR in Jordan and Syria have chronic medical conditions that lead them to apply for aid. “People suffer from heart, disease, cancer, high blood pressure, diabetes and other expensive diseases that need continuous treatment. There are many organizations providing assistance, but some people have been refugees for five or six years and there is no source of income and their health is deteriorating,” Manneh said.

All but the affluent look for ways to earn income. Often it’s the children rather than the parents who find work, which can affect family relations, Manneh said.

“The teenagers are working in the informal labor force and they are becoming the breadwinners and the head of the household, and suddenly this is changing the psychology and dynamics of the family,” she said. “The father is sitting and doing nothing while the kid is bringing in the income or the mother is going out to work as a cleaner.”

Some relief officials are hopeful that Iraq will stabilize, and refugees can return home. The alternative is grim. Just back from a trip to Turkey and Lebanon, where smaller Iraqi refugee populations reside, Carey noted that in all of the places he’s been to, refugees are not allowed to work and don’t have basic protections. “They can be picked up by police. They can be detained. They can be returned.”

Many of the Iraqis who fled are highly trained professionals, he observed. “They don’t have access to legal employment. They can’t work in the professions. Their children can’t get advanced education. If you want to talk about a recipe for regional instability, that’s probably an ideal one. You have a large number of people subject to trauma who can’t go home, who can’t have a stable future where they are, and only a small percentage will be able to access resettlement.”

Jordan and Syria are full of refugees hoping they will be among the lucky few. Not everyone can. At an Iraqi café in Amman, Aboes is asked what will happen if his application for a visa to the United States is rejected.

“My heart and my hopes will be broken,” he said simply.

[Margot Patterson, formerly the arts and opinion editor at NCR, traveled in Jordan and Syria in March.]