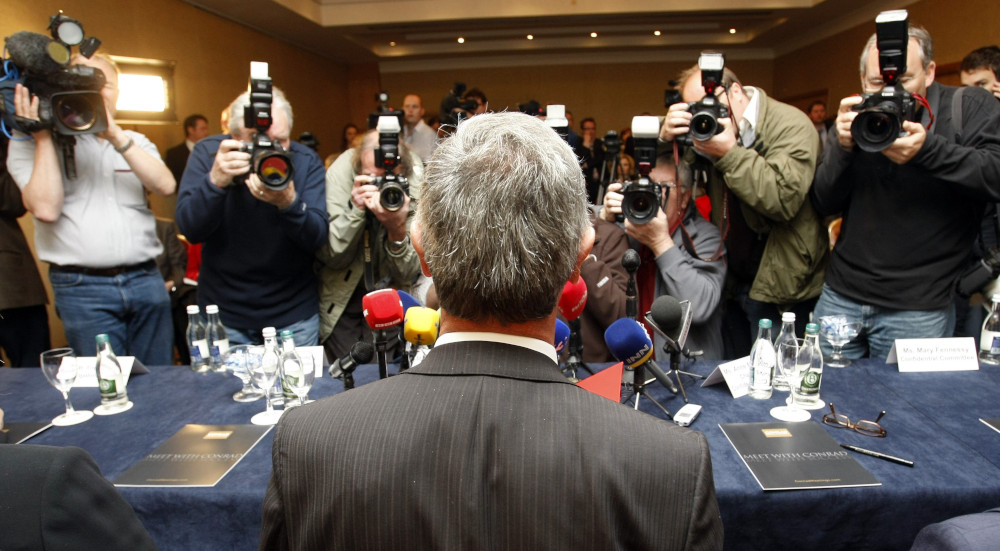 Ireland High Court Justice Sean Ryan is photographed as he releases the findings of the government's Commission to Inquire Into Child Abuse in the Conrad Hotel in Dublin May 20, 2009. In a statement Nov. 25, 2019, the commission said the number of children housed in religious-run institutions was approximately 42,000, about a quarter of the 170,000 previously cited in the 2009 Ryan Report. (CNS/Reuters/Cathal McNaughton)

More than 10 years after its final report, the commission set up by the Irish government to investigate claims of abuse in religious-run institutions has admitted that it overestimated the number of children in the homes.

In a statement Nov. 25, the Commission to Inquire Into Child Abuse said the number of children housed in the institutions was approximately 42,000, about a quarter of the 170,000 previously cited in the 2009 Ryan Report.

The commission was mandated to report on the extent of abuse in institutions supervised by the state but run by 18 religious congregations. It found that physical abuse was widespread and sexual abuse was endemic in many institutions for boys run by members of religious congregations. More than 1.4 billion euros has already been paid out in compensation to people who say they suffered abuse while living in the homes.

In a statement on the commission website, Justice Sean Ryan said, "The commission's report published in May 2009 contains a seriously erroneous statistic according to the general agreement of relevant experts and bodies."

After consulting relevant experts, Ryan said he is now "of the view that the number stated in the report is not correct."

"It appears that the total given in the report was derived by adding the yearly figures for the population in the institutions, but that did not take account of the fact that children were counted in each year of detention," he said.

While it was not possible to establish a precise figure, he said, "the department's calculation of the number of children in Industrial Schools and Reformatories from 1930 to 1970 and beyond is approximately 42,000 or somewhat higher." He said that the commission also had cross-referenced figures from the Department of Education before arriving at the fresh estimate.

Meanwhile, the Dublin Archdiocese said publicity surrounding the 2018 visit of Pope Francis to Ireland for the World Meeting of Families led to an increase in the number of people coming forward to make abuse allegations against priests.

In an annual report published Nov. 23, the dioceses reported 20 new allegations of clerical child abuse, compared to 14 in 2017.

"This is a reversal of a long-term trend of a declining number of new allegations," the report said.