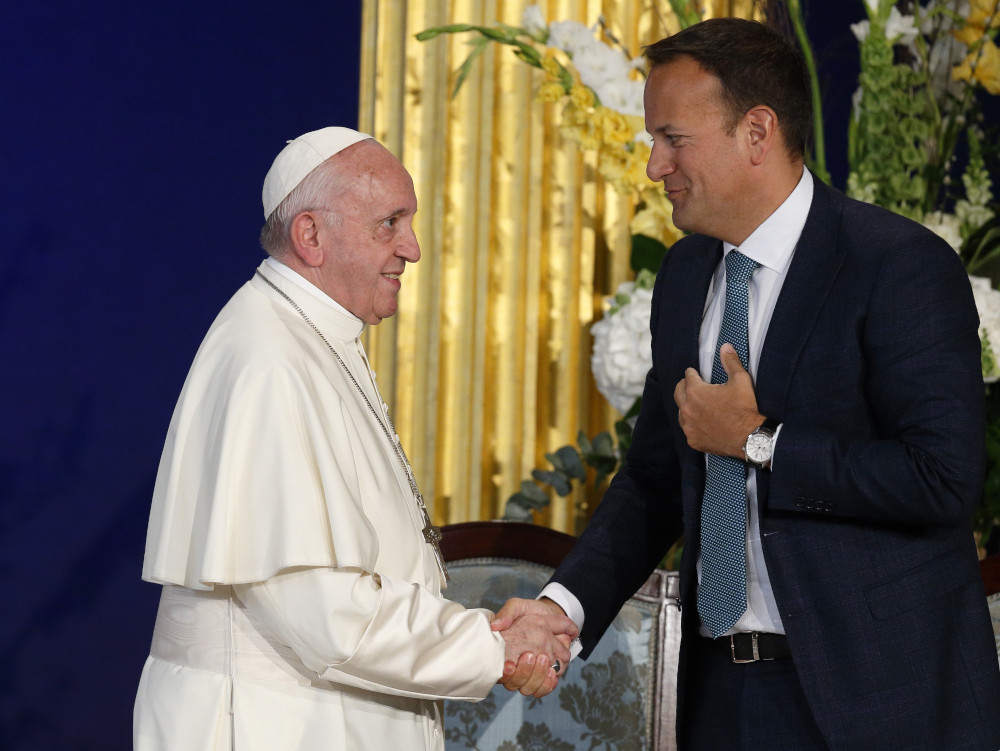 Pope Francis greets Leo Varadkar, then prime minister of Ireland, during a meeting with authorities, civil society leaders and members of the diplomatic corps in Dublin Castle in Dublin Aug. 25, 2018. A spokesman for Varadkar, now deputy prime minister, referred to Pope Francis' famous line "Who am I to judge?" after a priest said the politician would go to hell if he did not repent for being gay. (CNS photo/Paul Haring)

A spokesman for Ireland's deputy prime minister referred to Pope Francis' famous line "Who am I to judge?" after a priest said the politician would go to hell if he did not repent for being gay.

It was the latest in a string of comments by the priest and replies that prompted media coverage and resulted in the retired priest -- who often covers for priests on vacation -- being removed from his duties in the diocese.

During a homily in County Kerry Oct. 30, Sheehy called homosexual sex sinful and described transgenderism as "lunatic." About 30 parishioners walked out after Sheehy described sin as "rampant."

Bishop Ray Browne of Kerry apologized for the controversial homily, saying the views expressed were not representative of Christianity. The Gospel "proclaims the dignity of every human person. It calls on us all to ever have total respect for one another."

In a statement posted on the diocesan website Nov. 1, Browne said he was aware of "the deep upset and hurt" caused. He apologized to all who were offended.

He also was asked about Varadkar, who is gay, and the politician's support for same-sex marriage. The cleric said the politician would "go to hell" if he did not "repent his sin and seek forgiveness."

The spokesman for Varadkar said the deputy prime minister "does not believe that gay people will go to hell for being who they are, nor does he believe that any man or woman can make such a judgment. As Pope Francis said, who are we to judge?"

"As the Bible says, 'Judge not lest you be judged.'

"We are all God's children," the spokesman added.