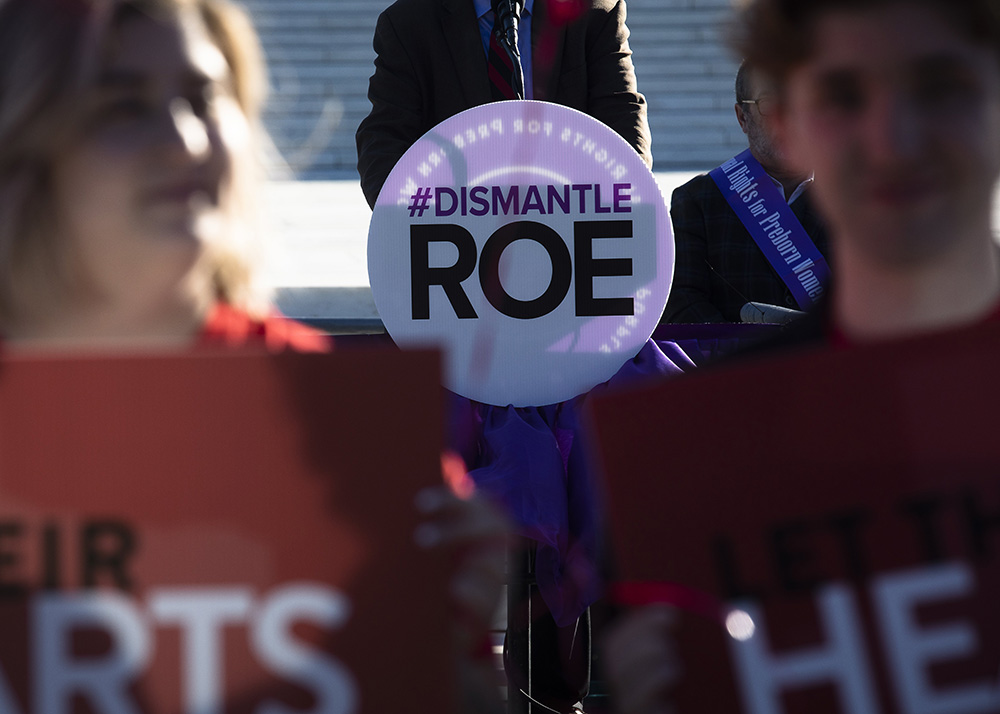 This past year was busy for the nation's high court, particularly with issues of interest to Catholics regarding abortion, religious liberty, COVID-19 vaccine mandates and the death penalty.

This fall, all eyes were particularly on the court with its two cases looking at abortion laws in Texas and Mississippi.

After hearing oral arguments in November, the court ruled Dec. 10 that a new Texas law that bans most abortions after six weeks of pregnancy can stay in effect but that abortion clinics could continue to challenge it.

And at the start of December, the court took up its biggest abortion case in decades, examining Mississippi's abortion law, which bans abortions after 15 weeks of pregnancy. This case is seen as having the potential to upend the court's 1973 Roe v. Wade decision that legalized abortion nationwide.

During oral arguments, the majority of justices seemed willing to allow the Mississippi law, which has been blocked by a federal judge, but it was unclear if they would take this further and overturn Roe.

If the court ultimately sides with Mississippi, it could lay the groundwork for abortion restrictions from other states because it would be the first time the court would allow an abortion ban before the point of viability — when a fetus is said to be able to survive on its own.

The Supreme Court has consistently ruled that states cannot restrict abortion before viability, at around 24 weeks.

The U.S. Conference of Catholic Bishops and Mississippi's Catholic dioceses of Jackson and Biloxi supported the state's law in amicus briefs.

As the arguments got underway Dec. 1, Baltimore Archbishop William Lori, chairman of the U.S. bishops' Committee on Pro-Life Activities, said in a statement: "We pray that the court will do the right thing and allow states to once again limit or prohibit abortion and in doing so protect millions of unborn children and their mothers from this painful, life-destroying act."

But while several Catholic leaders have spoken in favor of dismantling Roe v. Wade, Catholics across the board have not. Last year, a survey by the Pew Research Center showed 68% of U.S. Catholics said Roe should not be overturned and 56% said abortion should be legal in all or most cases.

This divide on abortion, also apparent across the country, was on full display on the steps of the Supreme Court the day of the oral arguments in the Mississippi case, when people were chanting, shouting or holding aloft signs with messages that either called abortion murder or said it was an essential right.

A ruling on that case is not expected until next summer.

On Dec. 13, the Supreme Court turned down two emergency requests from health care workers in New York seeking religious exemptions from the state's COVID-19 vaccine mandate. The workers' appeal — that the mandate violated their constitutional right to freely exercise their religion — was rejected by a federal court in New York.

The high court had denied a similar appeal in October from health care workers in Maine that had been rejected by lower courts. In both of these decisions, Justices Clarence Thomas, Samuel Alito and Neil Gorsuch said they would have allowed religious exemptions.

The court looked at another case from Maine this year in its review of a school choice program for students in rural areas that excludes schools that offer religious instruction.

Most of the justices seemed to think the program was discriminatory and found fault with how state education officials determined just how religious a school was in order to consider if the school could participate in the tuition program.

The state program remains in place because it had been upheld by the U.S. Court of Appeals for the 1st Circuit.

In a similar case, Espinoza v. Montana Department of Revenue, the Supreme Court ruled in 2020 that states are not required to subsidize private education, but they also can't exclude religious schools from receiving tuition funding simply because they are religious.

The U.S. bishops' conference praised that ruling, saying it means "that religious persons and organizations can, like everyone else, participate in government programs that are open to all."

A ruling is expected in the summer and it could have a significant impact on tuition aid for religious schools.

In the court's examination of the death penalty this year, it also specifically focused on the role of chaplains in the execution chamber.

The plea to allow spiritual advisers to pray aloud with death-row inmates or place hands on them in prayer during executions faced an uphill battle as some of the justices questioned if this would open up other requests or impose a safety risk.

Several spiritual advisers from different faith traditions joined an amicus brief in this case filed by the American Civil Liberties Union. The brief included Sr. Helen Prejean, a Sister of St. Joseph of Medaille, who is a longtime opponent of the death penalty; Sr. Barbara Battista, a Sister of Providence of St. Mary of the Woods in Indiana; and Benedictine Fr. Mark O'Keefe.

Related: Providence sister talks about the grief and gift of accompanying two men to federal execution

They said their role was "not simply to stand by mutely, but to minister to the prisoner as he meets death, providing spiritual comfort and a final opportunity for the individual to engage with his faith at the most critical time."

The bishops' conference similarly filed an amicus brief joined by the Texas Catholic Conference that said the role of spiritual advisers to prisoners "is of particularly grave importance at the moment of death."

In the summer, when the court handed down decisions from the previous term, one of its bigger decisions said a Catholic agency should not have been excluded from Philadelphia's foster care program for not accepting same-sex couples as foster parents.

Although the court said Philadelphia's anti-discrimination laws put an unfair burden on the Philadelphia Archdiocese's Catholic Social Services, it did not issue a sweeping ruling on religious rights or overturn a previous decision involving religious liberty.

The case centered on the city of Philadelphia in 2018 suspending a contract with the Catholic agency that allowed it to provide foster care placement. The city excluded the agency because of its policy of not placing children with same-sex couples or unmarried couples because these unions go against church teaching on traditional marriage.

Chief Justice John Roberts, who wrote the opinion for the unanimous decision in Fulton v. Philadelphia, said the service agency "seeks only an accommodation that will allow it to continue serving the children of Philadelphia in a manner consistent with its religious beliefs; it does not seek to impose those beliefs on anyone else."

He also said the city's actions of excluding the agency burdened its "religious exercise by putting it to the choice of curtailing its mission or approving relationships inconsistent with its beliefs."

Richard Garnett, law school professor at the University of Notre Dame and director of the university's Program on Church, State and Society, said the ruling will have a significant impact.

He called it "striking, and telling, that the court's more liberal justices" joined this decision, which he said points out that "respect for religious freedom should not be a partisan or left-right issue."