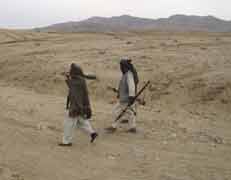 Taliban fighters walk with their weapons at an undisclosed location in Afghanistan Oct. 30. (CNS photo/Reuters)

DURHAM, N.C. -- Duke University ethicist Stanley Hauerwas, a self-described Christian pacifist, is an expert on just war theory. As Hauerwas sees it, not only did Iraq and Afghanistan fail to meet the criteria of a just war, but neither did World War II. Now, as the Obama administration weighs its options in Afghanistan, Hauerwas, 69, remains decidedly pessimistic not only about American prospects, but also American morality. Some answers have been edited for length and clarity.

RNS: What should President Obama do about Afghanistan?
Hauerwas: Afghanistan was understood to be part of the war against terror, and that was a decisive mistake because as soon as you said we are at war, you gave Osama bin Laden what he wanted -- he became a warrior, and not just a murderer. I would be much happier with a whole reconsideration of our involvement there -- not as a war, but as a police function, and how the police might intervene to arrest bin Laden. I know that sounds utopian, but just try thinking you’re going to win a war in Afghanistan. I can’t imagine anything more utopian than that. Ask the British. Ask the Russians. It’s never going to happen.

With seven years of hindsight, was Afghanistan ever a just war?
Afghanistan has the possibility of being limited in a way that might make it a bit more justifiable, but it’s still not clear what we’re fighting for. It’s so deeply ambiguous that it’s hard to fit into just war criteria. The very idea that you begin to assess the justness of a war after the war is already going to happen, I’m sorry, it’s already too late.

How would you assess the church’s response to the Iraq war?
Awful. Christians -- and it started with Sept. 11, as soon as we said we are at war -- Christians said, “That’s us.” We never asked the hard questions about the war on terror, and that is, I think, why Iraq happened. It has everything to do with the inability to distinguish between the Christian “we” and the American “we.”

What kinds of questions should we be asking now about Afghanistan?
We need to ask them to tell us the truth. Tell us that we’re engaged in an unwinnable business here, but we have these kinds of political stakes and we want to achieve those, and people are going to die for ambiguous political ends. Just tell us the truth.

What should be the church’s role in the debate over Afghanistan?
Let’s start with people in our congregations who are connected with the military, and ask them how they can justify that. Let’s start there. I have high regard for people in the military, but very seldom are they asked to justify what they’re doing.

So every Christian is called to be a pacifist?
Yes, absolutely.

So how do you respond to people who say that’s unrealistic?
Try lifelong monogamous fidelity in marriage. Do you think that’s realistic? Yet we do it. I’m not terribly cowed by the charge of being unrealistic.

If Obama were to call you for advice on Afghanistan, what would you say?
I’d say you have to tell the American people some really hard truths, namely that the war on terror was a mistake and we’ve got to start, as Americans, learning to live in a world that we don’t control. That’s not going to make you very popular.

The cathedral and the prison

Pentagon: No change for chaplains with gay ban repeal