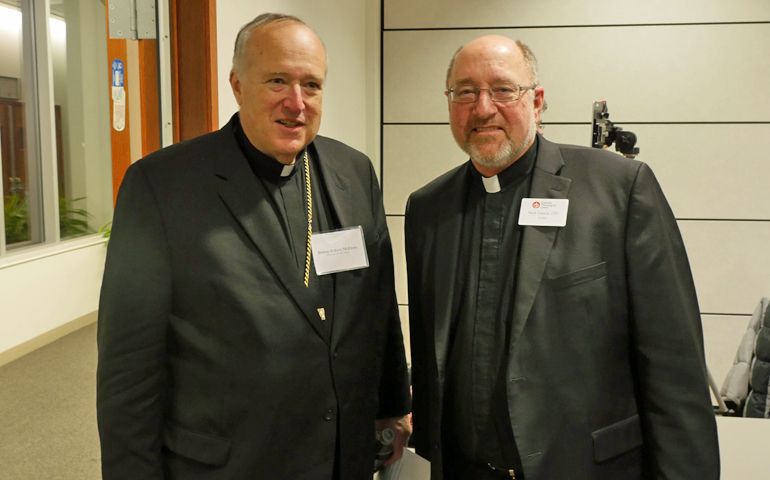 Catholics must "condemn unequivocally" anti-Muslim prejudice in the United States, including in our own church communities, San Diego Bishop Robert McElroy told a national meeting of Muslims and Catholics Wednesday, March 8.

McElroy, co-chair of the West Coast Catholic-Muslim Dialogue of the U.S. Conference of Catholic Bishops, was part of a two-day national meeting of three regional dialogue groups at Catholic Theological Union in Chicago March 8-9. Chicago Cardinal Blase Cupich is chair of the national dialogue.

In his public remarks, McElroy decried the "intolerable exclusion and marginalization, which both the followers of Islam and Christians are facing in our tormented world."

"It is unconscionable that in the United States, in the 21st century, one of the great world religions is caricatured, misrepresented and despised so widely in our culture," he said about followers of Islam. "It is even more appalling that Muslims have now become the object of government actions, carefully and deliberately designed in laws to target a specific religious community."

Noting that Catholics had been the victims of "extreme vetting" earlier in U.S. history and that Christians face persecution in the Middle East today, McElroy also urged all Muslims "to be vocal and unified in their condemnation of Christian violence in predominantly Muslim societies."

Although the U.S. faces a threat from extremists who have distorted Islam, McElroy said, "By linking the Muslim community to that threat in a discriminatory manner, we undermine our national security and dishonor our national heritage."

The two-day meeting included private meetings of 33 representatives from the Mid-Atlantic, Midwest and West Coast Muslim-Catholic Dialogues, as well as the public event where McElroy and Sherman Jackson of the University of Southern California spoke. The event was livestreamed on Facebook and attracted viewers from Singapore, the Philippines, Mexico and South America.

In his remarks, McElroy praised the sharing of theological reflections, such as those that happened at the meeting, but said that Muslim-Catholic dialogue must also be brought to people in the pews, through pastoral accompaniment and inclusion.

"It is not enough to clarify our commonalities and differences on a deep theological level, or even to publish these findings, if we do not take steps to broadly convey this deepened level of friendship and truth to Catholics and Muslims more broadly," he said.

Pastoral cooperation on issues such as protecting religious liberty and passing along the faith to the next generation is necessary, he said, and will require "new structures of collaboration and cooperation."

Ignorance causes problems between the two communities, McElroy said. It is not merely or even primarily theological ignorance, but rather "ignorance of not knowing one another as brother and sister precisely in our religious identities."

McElroy has spoken up on behalf of marginalized communities, including calling Catholics to become "disrupters" of narratives of hatred gaining currency in the United States. "We must disrupt those who train us to see Muslim men, women and children as forces of fear rather than as children of God," he told the World Meeting of Popular Movements in February.

Jackson, a professor of Islamic thought and culture, explored whether all religions, but particularly Islam, can challenge the common good as it is understood in Western liberalism, in which religion is often perceived as a threat to the American values of liberty, equality and autonomous choice.

He answered in the affirmative, but noted that religion can only challenge the common good in this way if it is "willing and able to cooperate across denominational and confessional lines."

"The zero-sum mindset of the past, when the gains of one religion can only be seen as a loss to another, will no longer serve any religion in America," he said. "Jews and Christians may think that Islamophobia merely tarnishes the image of Islam. The reality, however, is the discrediting of any religion has the cumulative effect of discrediting all religion."

Religious communities must accept pluralism but also work together to secure a meaningful place for religion in American society, concluded Jackson, who was named one of the 500 most influential Muslims in the world by the Royal Islamic Strategic Studies Center in Amman. He also spoke at the funeral of Muhammad Ali.

Maria Khani, a member of the West Coast Dialogue group, praised the event, saying it displayed solidarity, "especially given what's happening in the media and the White House."

"People need to see clergy and imams meeting together, willing to make positive changes," she said.