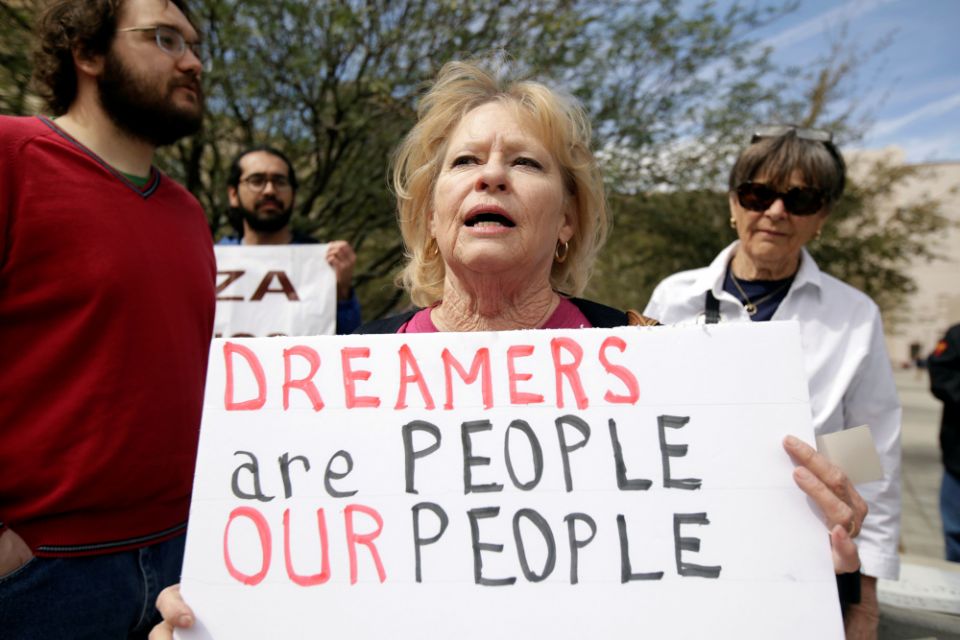 Washington — The U.S. Conference of Catholic Bishops' Committee on Migration March 15 endorsed the American Dream and Promise Act of 2019,which would provide equal protection and a pathway to citizenship for qualifying "Dreamers" and those covered by the temporary protected status and Deferred Enforced Departure programs.

"We need a permanent legislative solution for those who have spent their lives contributing and living in the United States, the country they know as home,” said Bishop Joe Vásquez of Austin, Texas, who is the committee's chairman.

"Dreamers and TPS holders are vital members of our community who are going to school, working to make our communities better and raising families," he said in a letter to House members. "They have lived in limbo for far too long and now is the time for a solution."

The Dreamers are young adults who were brought by their parents to the U.S. illegally as children and remain in the country under the Deferred Action for Childhood Arrivals, or DACA, program. "Dreamer" comes from the DREAM Act, the Development, Relief, and Education for Alien Minors Act, an earlier bipartisan proposal with several provisions to qualify these young people for permanent residency.

The American Dream and Promise Act, or H.R. 6, was introduced in Congress March 12 and it builds on the DREAM Act, according to its many co-sponsors. It offers qualifying young people "permanent resident status on a conditional basis" and a path to full lawful permanent residency and eventual citizenship.

Additionally, H.R. 6 provides lawful permanent resident status for eligible individuals from countries designated for temporary protected status or DED as of 2016 and who have been living in the U.S. for at least three years.

The American Dream and Promise Act of 2019 also amends current temporary protected status law to require the secretary of the Department of Homeland Security to provide a detailed explanation of a decision to terminate a temporary protected status designation, including a report to Congress three days after publishing a notice of such termination.

"My brother bishops and I believe in protecting the dignity of every human being, particularly that of our children and families," Vásquez said in his letter. "The Catholic bishops have long supported Dreamers and TPS holders, as well as their families.

"We recognize and admire these individuals as contributors to our economy, academic standouts in our universities, and leaders in our parishes. It is both our moral duty and in our nation's best interest to protect them and allow them to reach their full God-given potential."

For these reasons, he said, he was calling on House members to support and co-sponsor H.R. 6 if they have not already done so. He thanked those who were already supporting and/or co-sponsoring the measure.

"We also urge you to continue to work toward the larger legislative reform of our immigration laws that our country so desperately needs," Vásquez said adding that the bishops' conference's migration committee "stands ready to work with Congress to reform our immigration system in a humane, just and common-sense manner."

About a week before H.R. 6 was introduced, Auxiliary Bishop Mario Dorsonville of Washington testified on Capitol Hill, calling on Congress to adopt legislation that would protect Dreamers and those covered by temporary protected status and DED so that families are kept intact.

Testifying before the House Judiciary Committee March 6, the bishop said such measures were necessary to uphold the dignity of immigrants, whom he described as "children of God."

Dorsonville, who will become chairman of the U.S. bishops' migration committee, said the Catholic Church would continue to assist and advocate on behalf of immigrants and refugees fleeing violence, poverty and the effects of natural disasters in their homeland.

"Our work ... stems from the belief that every person is created in God's image," he said of programs operated through various Catholic agencies and parishes. "We follow the teaching of the Gospel, and in his own life and work, Jesus identified himself with newcomers and with other marginalized persons in a special way: 'I was a stranger and you welcomed me.' "

"Dreamers and TPS and DED holders," he added, "are our neighbors, parishioners, and, most importantly, fellow children of God."

President Barack Obama created DACA by executive order in 2012. It does not provide official legal status or a pathway to citizenship but, among other provisions, it allows young people who qualify to remain in in the country lawfully without the threat of deportation and they can apply for driver's licenses and work permits.

President Donald Trump in 2017 announced that DACA would end, but a federal appeals court in California blocked the order in November, allowing the program to remain in place.

At the time he issued the order, Trump challenged Congress to take action and pass a replacement before it was to be phased out. Last year he said that "DACA was dead because the Democrats didn't care or act" to save it.

Temporary protected status is a designation that allows people from certain named countries to lawfully live and work in the U.S. when they cannot safely return to their homelands because of a natural disaster, continuing armed conflict or other extraordinary conditions.

DED is a designation made by the president to provide temporary relief from deportation and work authorization for nationals of another country when it's in the United States' foreign policy interests to do so.

In recent months the Department of Homeland Security had filed notice it would end temporary protected status for foreign nationals from several countries — El Salvador, Nicaragua, Haiti, South Sudan, Honduras and Nepal — living in the U.S., saying conditions in their respective countries had improved. But the decision has been challenged in the courts and to date Homeland Security has had to extend the protection to most of these groups.