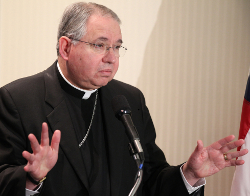 SACRAMENTO, Calif. -- The California Catholic Conference opposes a bill passed by the state's legislators that requires social studies texts for kindergarteners through high school seniors in public school to specifically include the role and contributions of lesbian, gay, bisexual and transgender Americans.

The bill also would prohibit the state Board of Education from adopting instructional materials that discriminate on the basis of sexual orientation or gender identity.

The state Assembly July 5 passed the bill, called the Fair, Accurate, Inclusive and Respectful Education Act. It passed the state Senate in April and was awaiting a signature or veto from Democratic Gov. Jerry Brown, who has not indicated whether he will sign the document. A similar bill was vetoed in 2006 by former California Gov. Arnold Schwarzenegger.

If the bill is signed, California will be the first state to require public schools to teach about the historical contributions of gays and lesbians.

California already requires that public school students be taught from texts that "accurately portray the role and contribution of culturally and racially diverse groups including Native Americans, African-Americans, Mexican-Americans, Asian-Americans, and European-Americans in the development of California and the United States."

The current bill revises this list to also include Pacific Islanders; lesbian, gay, bisexual, and transgender Americans; persons with disabilities; and members of other ethnic and cultural groups.

Los Angles Archbishop Jose H. Gomez said the bill "amounts to the government rewriting history books based on pressure-group politics." In a July 8 column in The Tidings, the archdiocesan newspaper, he also described the bill as "another example of the government interfering with parents' rights to be their children's primary educators."

A legislative alert sent by the California Catholic Conference, the public policy arm of the state's bishops, had urged Catholics to tell their state legislators to vote against the bill.

"Professional educators and historians, working with teachers, parents and school boards, should design social studies curriculums," the alert said, noting that "politicians, subject to the winds of political correctness, should not because they often respond with more alacrity to the interest groups than to their constituents whose children attend California's schools."

Ned Dolejsi, the conference's executive director, called the legislation "unnecessary and overly intrusive" in testimony before the state's Senate Judiciary Committee this spring.

The conference also sent a letter to the committee asking members to "oppose this mandate on the already overworked schoolteachers in our state who perform the invaluable task of molding the next generation and the already overtaxed budgets of our public schools."

Sen. Mark Leno, a San Francisco Democrat who introduced the bill last December, said in a news release that most textbooks don't include historical information about the lesbian, gay, bisexual and transgender movement, which he said "has great significance to both California and U.S. history."

He said the nation's "collective silence on this issue perpetuates negative stereotypes" and leads to increased bullying of young people.

William May, chairman of a California-based group called Catholics for the Common Good, said in a June 16 letter to the head of the state Assembly's Education Committee, that problems around bullying are not going to be solved by "cosmetically sexualizing social studies" in the state's public schools.

He said unjust discrimination against gays and lesbians "is an important fact that must be taught and not forgotten, but this bill will not affect that." He also said the bill's language was "so vague, and subject to such broad interpretation, that it can only lead to confusion, conflict and the potential for complaints and litigation."

Advocates prepare for possible cuts in refugee admissions to the US