by Brian Fraga
Justice
People
World
This article appears in the War in Ukraine feature series. View the full series. 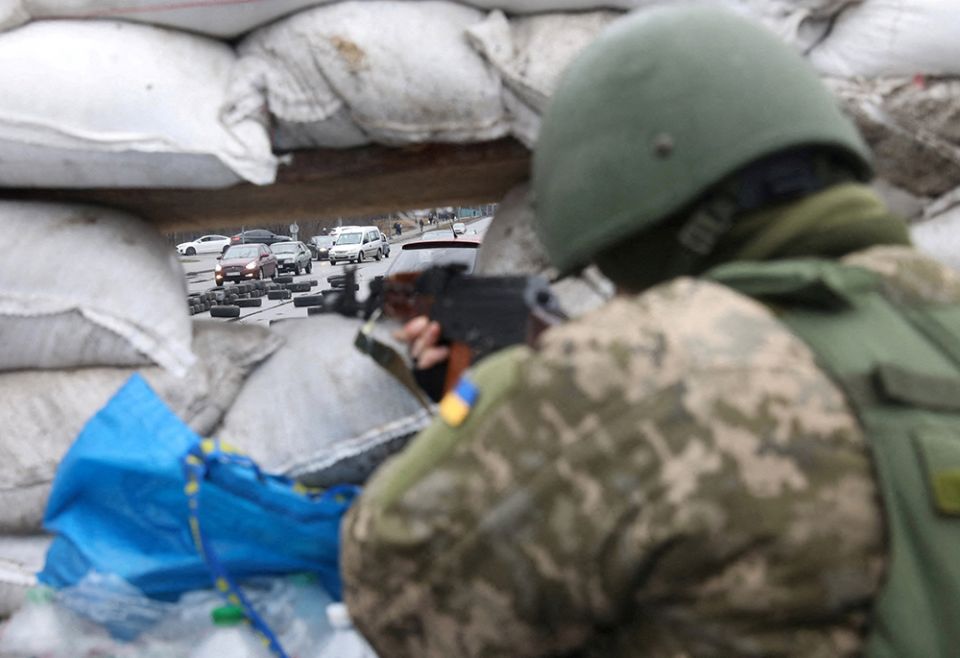 A member of the Territorial Defense Forces in Kyiv, Ukraine, stands guard at a checkpoint March 3, as Russia's invasion of Ukraine continues. (CNS/Reuters/Mykola Tymchenko)

A loose collection of Catholic and other Christian ethicists, scholars and theologians has released a statement condemning Russia's "brutal, wholly unprovoked and unjustified" invasion of Ukraine.

Rebutting Russian President Vladimir Putin's claims that he launched a "special military operation" in self-defense to demilitarize Ukraine and hasten its "denazification," the statement from Ethicists Without Borders declares "there can be no credible ethical justification in defense of this attack."

"This long-planned military assault against a democratic, independent, European sovereign state is a flagrant violation of international law, and undermines the founding principles of the [United Nations] Charter," the ethicists wrote.

The 375-word statement, posted on the group's Facebook page and online at catholicmoraltheology.com, as of March 4 had garnered the signatures of 128 Catholic scholars and ethicists from other Christian denominations. Notable signees include theologians such as Fr. Bryan Massingale of Fordham University; M. Shawn Copeland, former president of the Catholic Theological Society of America; and Jesuit Fr. David Hollenbach, the Pedro Arrupe Distinguished Research Professor at Georgetown University's School of Foreign Service. 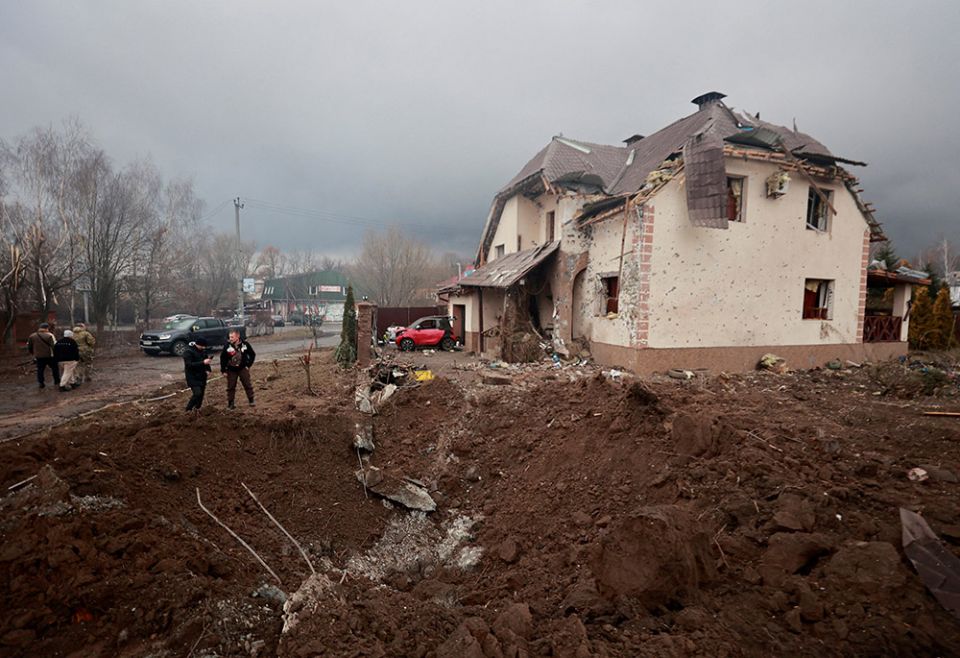 People in Hatne, Ukraine, stand next to a crater in front of a house damaged by recent shelling March 3, as Russia's invasion of Ukraine continues. (CNS/Reuters/Serhii Nuzhnenko)

"It's important for Christian ethicists to voice their concerns over what is happening in Russia and Ukraine," said Kevin Ahern, a religious studies professor at Manhattan College who also signed the statement, as well as others that Ethicists Without Borders has put out in recent years on matters related to racial justice and police brutality.

"A moral responsibility in the vocation of the theologian is to voice concern over such things," Ahern told NCR.

Posted March 2, the Ethicists Without Borders statement expresses solidarity with the Ukrainian people and their democratically elected government, including President Volodymyr Zelensky. Decrying the violence, destruction and widespread loss of life, the statement praises Russian civilians who have protested the war and encourages Russian troops to lay down their weapons "in conscientious protest against this illegal and immoral invasion."

"We used Óscar Romero's language in calling for the military to let down their weapons, and disobey unjust orders," said María Teresa Dávila, a professor in religious and theological studies at Merrimack College in North Andover, Massachusetts.

Dávila signed and was among a group of eight academics that drafted the statement. She told NCR that the group included "a wide range of perspectives" on matters related to the Catholic Church's just war tradition and more nonviolent responses that church leaders, including Pope Francis, have embraced in recent years.

"There is no question that the Ukrainian people responding in self-defense through violent means is legitimate. We didn't want that to be a question. That's in there," Dávila said.

"It gets trickier with respect to sending weapons, and who has the right to send weapons, and what kind of assistance can be offered," said Dávila, who added that some scholars she respects told her that the statement doesn't "go far enough." 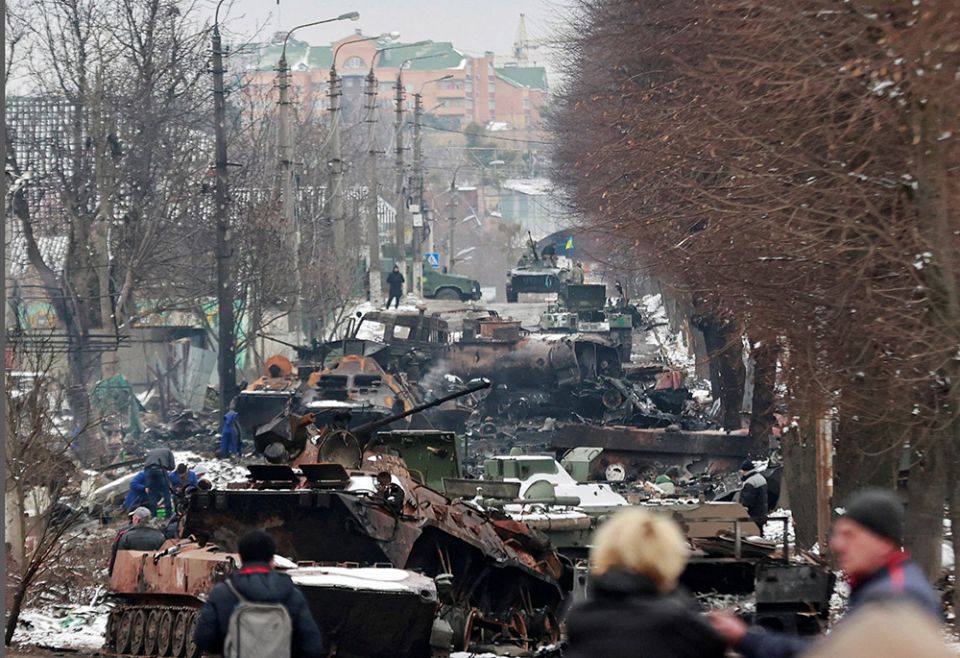 Destroyed military vehicles are seen on a street March 1 in Bucha, Ukraine, as Russia's invasion of Ukraine continues. (CNS/Reuters/Serhii Nuzhnenko)

Tobias Winright, a theological and health care ethicist at St. Louis University who also helped write the statement, told NCR that the academics who drafted and endorsed it represent views ranging "from pacifism to just war and beyond."

"But we were definitely trying to be clear in our view that what Putin is having his military do against Ukraine is clearly immoral and unjust," said Winright, who referenced news reports that indicate the Russian military has attacked civilian population centers and deployed banned weaponry such as cluster bombs and thermobaric explosives.

Explaining his own thinking on just war matters, Winright argued that the Ukrainian government has a duty to protect its people through military means.

"If the bullets are flying and the bombs are falling, you have the duty and the right to use armed force to defend yourself," Winright said, adding that Ukraine clearly has "just cause" on its side to fight back against Russia. 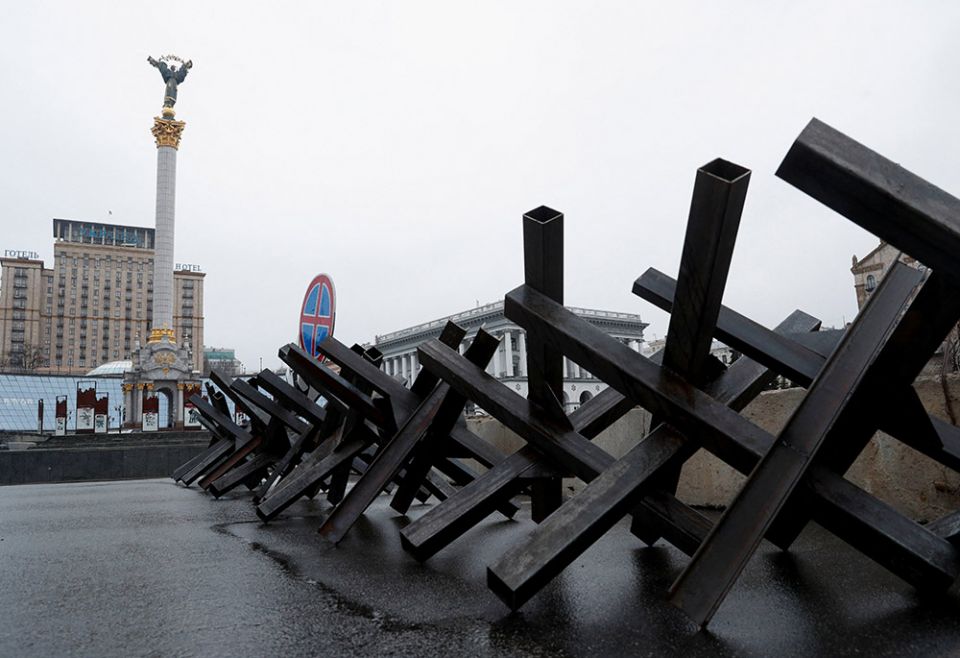 Anti-tank obstacles are seen at a checkpoint in Independence Square March 3, 2022, in central Kyiv, Ukraine, as Russia's invasion of Ukraine continues. (CNS/Reuters/Valentyn Ogirenko)

Regarding the Catholic just war tradition's principle that combatants must consider the probability of success, Winright noted that the Ukrainian military has "been more successful than expected." But he added that whether Ukraine can continue to be effective against Russia on the battlefield "is still a question."

"We definitely need to continue providing as much humanitarian aid as possible," Winright said.

To date, the United States and other countries in the North Atlantic Treaty Organization have provided weapons and other military supplies to the soldiers and armed civilians fighting in Ukraine. The United States and the European Union have also imposed a crippling package of sanctions that has effectively cut Russia off from the global economy. Those sanctions have also targeted Putin and his inner circle of relatives, advisers and oligarchs.

"I've been impressed that these sanctions have been targeted toward those most responsible, namely Putin and the oligarchs," said Winright, who suggested that international sanctions have "become smarter, more calibrated, more proportionate." 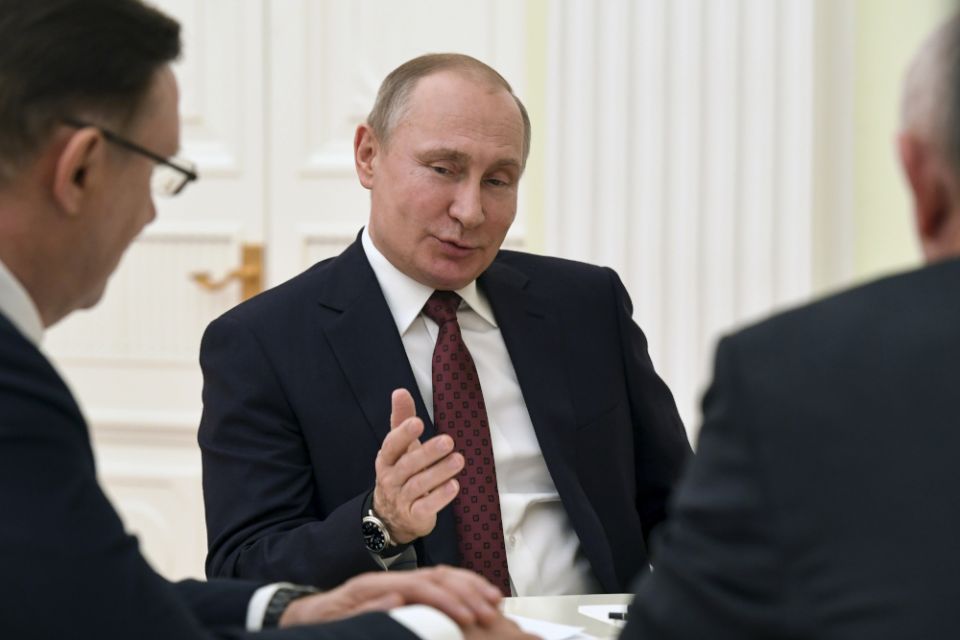 Russian President Vladimir Putin meets with co-chairs of his campaign March 19, 2018 at the Kremlin in Moscow. (CNS/pool via Reuters/Yuri Kadobnov)

"Back in the 1980s/early '90s, we thought [sanctions] were a nonviolent method of coercion against unjust regimes," Winright said. "But during the '90s, it became clear that our sanctions in Iraq directly harmed many Iraqi civilians."

Ahern of Manhattan College is still concerned that the sanctions levied thus far could hurt poor and struggling people in Russia and elsewhere who might face increased prices for food and basic goods. He said lessening the sanctions' impacts on innocent civilians will need to be evaluated on a regular basis.

Regarding military action in Ukraine, Ahern challenged Christians and people of goodwill to think through the possibilities of increased civilian suffering and the potential benefits to international arms manufacturers.

In its final paragraph, the Ethicists Without Borders statement calls on people of faith and goodwill to support the growing international protests and peace vigils demanding an end to the violence and immediate withdrawal of Russian forces from Ukraine.

Dávila said she hopes the statement will prompt people to stop and think about "how they are also actors" in situations such as the war in Ukraine. She added that the crisis should prompt humanity to further reflect on the geopolitical challenges facing the planet in the years to come.

"Especially as resources from global warming continue to be push factors and drive people toward positions of conflict, we are going to have to provide answers for those conflicts," Dávila said. "This may be the first of what that may look like."

*An earlier version of this article incorrectly labelled Fr. Bryan Massingale a Jesuit. He is a diocesan priest.

A version of this story appeared in the March 18-31, 2022 print issue under the headline: Catholic ethicists, scholars and theologians condemn Russian invasion .

Reclaiming the Catholic moral and intellectual tradition from the culture wars