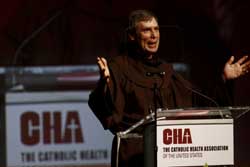 NEW ORLEANS
Health care reform legislation now being drafted on Capitol Hill will likely include broad, sweeping measures with significant implications for providers, Catholic Health Association experts told health ministry leaders gathered Monday for a panel session at the annual Catholic Health Assembly in New Orleans. But it will take some time before the bill’s many “building blocks” and “moving pieces” settle into place.

With an early draft expected to be released next week, public plan options to expand health coverage, an individual mandate that would impose an insurance requirement on all Americans and the challenge of financing coverage will spark intense debate in the coming weeks, said Michael Rodgers, CHA senior vice president of public policy and advocacy. A bill could reach President Obama’s desk by October.

“This is ambitious but doable,” Rodgers said. “Today, certainly, in the White House, we have a president who is going to make this a top priority.”

Part of the reason for the increased momentum behind health care reform is that many people are starting to see the current system as a major contributor to the economic crisis, Rodgers said. Add to that the country’s unfavorable position in the global economy, which many attribute at least partially to the US healthcare system, and there’s a recipe for action.

Nationwide, the US’s 60 Catholic health care systems nationwide account for nearly twenty percent of hospital admissions -- a figure that added up to more than 5.5. million patients in 2007. The weeks ahead, many agree, will be crucial in determining how to align the proposed measures with the ministry’s principles and vision for health care.

Now is the time for advocacy by the Catholic health care community, said Kathy Curran, the organization’s senior director of public policy. She encouraged attendees to motivate their ministries by going back to CHA’s vision principles.

We have to seize this opportunity now,” Curran said. “Justice demands – the common good demands – that every person have access to health care when they want it.”

The session seemed to have been one of the more popular during the Sunday- Tuesday event, which drew nearly 800 health ministry representatives to the Sheraton New Orleans Hotel and featured, among other speakers, Nancy Brinker of Susan G. Komen for the Cure, Archbishop Alfred Hughes of the Archdiocese of New Orleans and CBS’ Bob Schieffer. Other breakout sessions covered a range of topics, from environmental sustainability in Catholic hospitals to the application of art as a form of spiritual healing.

Stan Brock, who gave the keynote presentation during Monday’s program, talked about his work with Remote Area Medical, an organization made up of volunteer doctors and nurses who bring health care free of charge to underserved areas. Though Brock’s inspiration for starting the organization was his own experience growing up on a remote ranch in the Amazon rain forest, the group now focuses most of its resources in the United States. But the people it serves are not – as some assume – homeless or unemployed; for the most part they are underinsured, working-class wage earners who cannot afford medical care, be it for a cancer screening or a new pair of glasses.

“Health care in the United States has become a privilege of the wealthy or the very well insured,” Brock said, after showing the audience a CBS documentary about one of his health clinics. He asked attendees to support legislation that allows doctors to offer their services free of charge across state lines, but also gives them a certain degree of immunity from lawsuits.

Striking a more philosophical note, Daniel Sulmasy, a Franciscan Friar, physician and ethics scholar, opened his keynote address Sunday afternoon with an anecdote that highlighted some of the inefficiencies of the current health care system, bringing up some of the broader issues at the root of the problem. Sulmasy, who until recently held the Sisters of Charity Chair in Ethics at St. Vincent’s Hospital in New York City, drew laughs from the audience as he described his frustration at being unable to obtain a Band-Aid and gauze for a friend after walking into the emergency room without his hospital credentials. Instead of listening, and helping with a request for basic first aid items, the hospital staff just focused on following protocol, he said, and the nurse on duty didn’t even acknowledge him.

“This event, small as it is, I think epitomizes the (huge) problems in health care today: money, bureaucracy, indifference, burnout.” Sulmasy said he found it especially troubling that this occurred inside a Catholic hospital that bears the name of a saint known as a caregiver to the sick. “Would St. Vincent de Paul have said, ‘I’m sorry sir, we can’t help you?’”

But the problems faced by today’s society run deeper than health care, he said. They are rooted in the rejection of Christian values, and the increasingly secular way of thinking which has become the norm rather than the exception.

“I think we’ve all become closet Hobbesians,” Sulmasy said. “Morality, then, just becomes a set of rules.” Part of the reason for this lies in a growing concern with measurable business outcomes as the only concrete means of gauging progress, he explained – but when a patient is relegated to the role of customer, the hospital becomes merely a business. Instead, Sulmasy called on audience members to return to the foundation of a healer’s work, and the only reason to care for the sick.

“The vision of love is sweeping – love sees so much more than outcomes,” he said. “In a world in which Christian values have been transvalued, we don’t know anymore what love means.”

Sulmasy said health care providers today are so immersed in the culture of management that “we think we can manage our way into the future of health care.” But the solution to the problem has little to do with management and policies, new rules or business models – it is “faith-based health care.”

In an interview, Sulmasy, who next month begins a post as Clinton-Kilbride Chair in Medicine and Medicine Ethics at the University of Chicago’s School of Divinity, traced the history of healers from Jesus Christ and the apostles to the very first hospitals housed inside monasteries and the saints who put their own lives in danger to bring comfort to the sick.

Although society has been moving toward more secular values for hundreds of years, he said the last two decades have signaled a more pronounced shift in this direction. In terms of the Obama administration’s plan for health care reform, Sulmasy said “any move forward is (probably) good news,” although he doesn’t believe Obama is “willing to go far enough.”

“I’m not someone who is generally in favor of big government intervention,” he added, “but I think health care is one of those systems that can be simplified by a government takeover of the insurance companies.”

While this type of reform would be a “step forward,” it still fails to address the lack in spirituality in today’s health care system, which would require a conversion of people’s attitudes. That, Sulmasy said, will be the bigger challenge.

Popovici is a NCR Washington contributor.