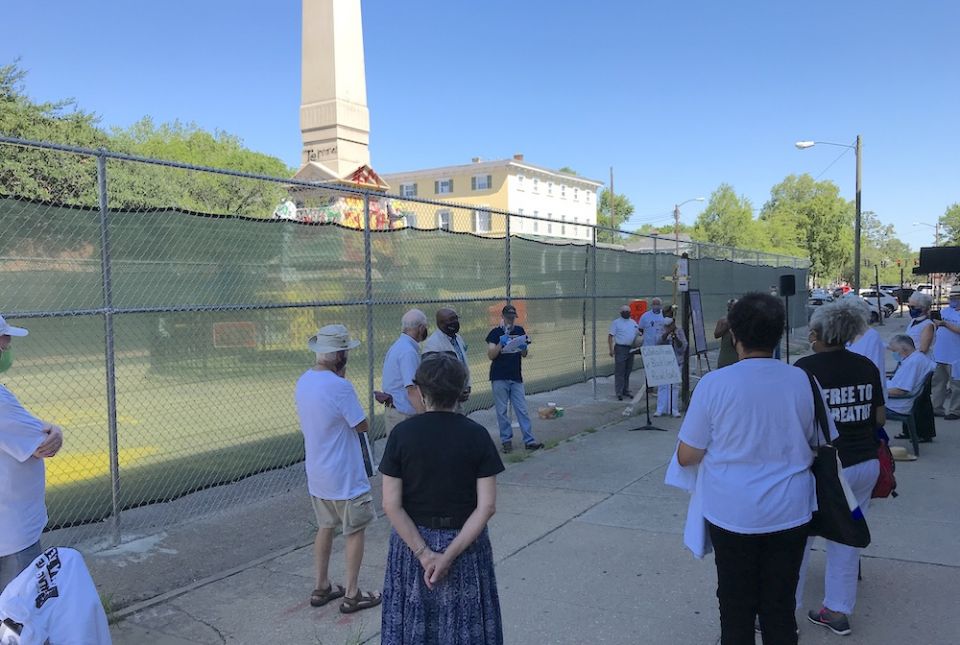 The pilgrimage's stop in Portsmouth, Virginia, was held next to the city's Confederate monument, which was attacked by protesters on June 10. Later on the day of the pilgrimage, the city council unanimously voted to remove it from its town square location, where it has stood since the late 1800s. (Robert McCabe)

Audrey Douglas-Cooke, of the Church of the Holy Family in Virginia Beach, was 15 when her family moved from Guyana to Washington, D.C., in the early 1970s.

After her early childhood in South America, she said it was a shock to move to Washington where she graduated from Georgetown University and went on to earn a graduate degree elsewhere, only to realize that she was being judged by the color of her skin and not her educational accomplishments.

On July 28, in searing midsummer heat, she was among more than 60 people, including more than half a dozen clergy members, who journeyed as part of a "prayer pilgrimage for Black lives and racial equity" to three sites in southeastern Virginia where Confederate monuments stood for more than a century.

"How can we as Catholics sit in our churches and pray and not take action and not show that we, too, want to participate in making a difference in the lives of everyone, especially Black lives?" Douglas-Cooke asked.

As Confederate statues and memorials fall across the South, a coalition of Catholics and other Christian groups in the Norfolk, Virginia, area has mobilized to speak up about racial injustice and calling for action. 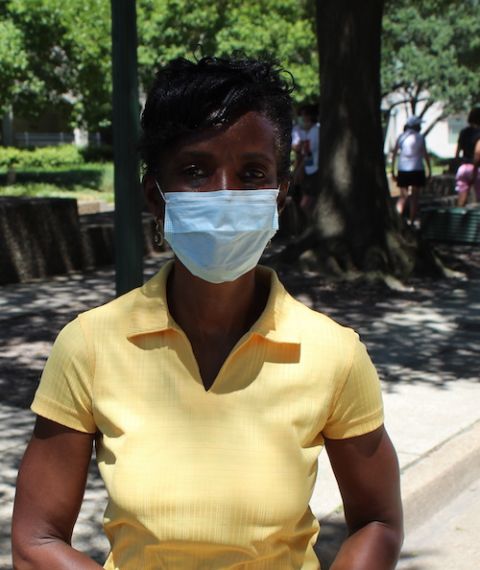 "The monuments are coming down; the issues remain," said Abby Causey, one of the organizers of the coalition.

The group, which calls itself Catholics and Friends for Black Lives and Racial Equity, led a brief program at each site, where prayers were offered, a statement of purpose read, calls for action declared and, perhaps most poignantly, stories told by Black citizens from each of the communities. They called for reforms in policing, education and housing.

The memorials depicting Confederate soldiers at two of the three sites — in Virginia Beach and Norfolk — had already been removed by the day of the pilgrimage.

Later the same day, the City Council in Portsmouth voted unanimously to remove the monument there, which had been a fixture in the city since its dedication in 1893.

From the late 1800s through the First World War, 40 counties in Virginia erected Confederate monuments near their courthouses, said Peggy Snead, a coalition member, at the pilgrimage's first stop outside the 1823 Old Courthouse in Virginia Beach.

"Slave auctions and slave sales, an integral part of the rural farming economy, were carried out on the grounds near the entrance of the courthouse, where the legal details of these sales were finalized," Snead said.

Virginia monuments' "prominent placement near the courthouse entrance served as a visible reminder to all doing business with the county that though the war may have been lost, those whose memory would be honored were citizens who fought and died for the preservation of human slavery and the power held by white, land-wealthy men," she added.

While the pilgrimage, within a little more than three hours, visited three monument sites in Virginia Beach, Portsmouth and Norfolk, the monuments themselves were not really the focus of the event, Causey said.

The statues and whether they were still there or not weren't so much the point as what happened at the sites and the history behind them.

"If you don't want to listen to someone, then your heart will always stay shut," Causey said.

In Virginia Beach, B. Theron Williams, 62, CEO for the Center for Global Diplomacy and Kingdom Reign Church, reflected on an incident from a little more than year ago, when he said police officers showed up in his office and threatened to take him to jail after he asked the driver of a car in his church parking lot to move to another spot.

"He wasn't concerned with who I was," Williams said. "He was concerned with making me know that he was in charge, even on my property, in my office, in my church."

After describing his encounter with police, he said it's hard for others to appreciate the impact of such an experience.

Moving to Portsmouth, an old port city, the pilgrimage gathered next to the only monument still standing of the three sites visited, cordoned off with a high-curtained fence.

The theme in Portsmouth was the need for education reform.

The Rev. Julia Dorsey Loomis, a retired Episcopal priest, one of the speakers in Portsmouth, recalled growing up in the city in the early to mid-1950s.

"I was aware of unfairness in our segregated schools," she said. "Black schools inherited our used books, our discarded desks. I was aware, but I didn't know what to do. I never had a chance or never took the opportunity to listen to people with skin color different from mine. We were taught to fear Black people, not to listen to them." 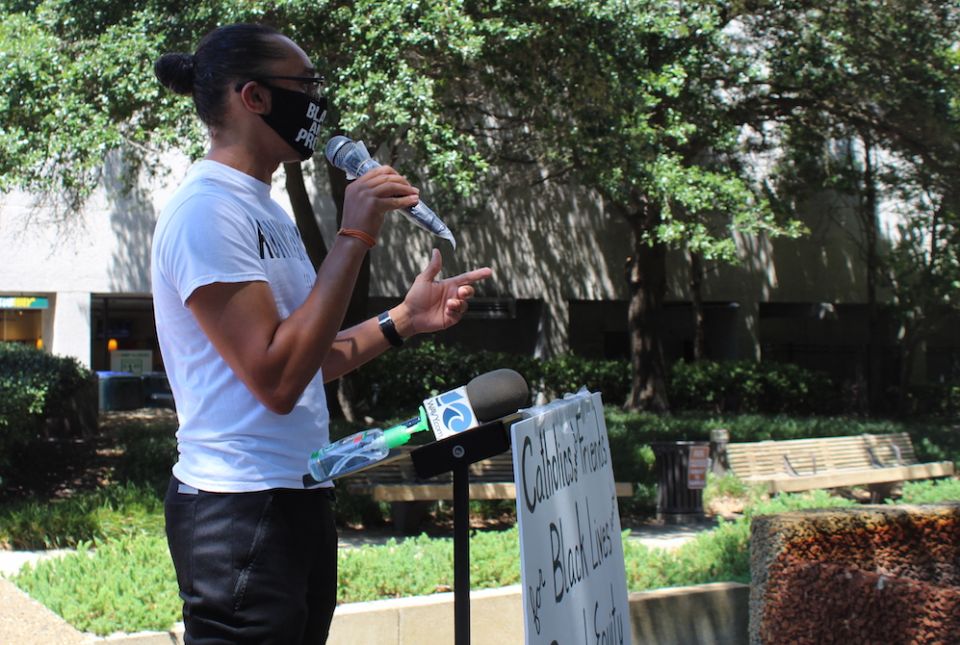 Lavonne Pledger spoke in Norfolk about the need for reforms in housing. (Robert McCabe)

Ray Smith, 65, a Portsmouth native who served on both the school board and city council and retired recently after 41 years working for the local power company, recalled being among a few Black students who attended a predominantly white high school in the late 1960s where he was subjected, on a routine basis, to jokes and ridicule.

"Because of this racism, because of the system, it motivated me to want to step up at a very young age, even in high school, and even to this day to continue to be involved in" the fight for racial justice, he said.

Another Portsmouth resident, Tyran Green, said she, too, had experienced racism and challenged those on the pilgrimage to take action.

"We want you to do something; everybody can do something," she said. "You can write a letter to the editor, you can donate, you can encourage, you can talk to your neighbor. ... Each one, teach one."

Horace Savage, 95, who was one of the first Black teachers to stand before a class in a traditionally all-white high school in Portsmouth in the early 1960s, had been scheduled to speak at the pilgrimage stop there but did not attend because of concerns about the potential for unrest.

Not long ago, he made a video about his experience, in which he recalled how in his first class — a senior government class — students "welcomed" him by banging their shoes on their desks and chanting the N-word in unison, nonstop.

Film on Royzoner's Vimeo page of Horace Savage, an educator

In Norfolk, as he had done at the other pilgrimage stops, Steve Baggarly of the Norfolk Catholic Worker, read a statement of purpose, which noted that: "For 400 years, the United States has had a caste system with African-Americans held at the bottom of every social index throughout our entire history."

The event was planned for July 28, Baggarly said, to remember the 14th Amendment, which entered into force on July 28, 1868, making all Blacks born or naturalized in the United States full citizens and guaranteeing due process of law to members of all races.

He highlighted another July 28th in history — in 1917 — when 10,000 Black people marched on Fifth Avenue in New York City, the first protest of its kind in New York, mourning those killed in a massacre of Black people in East St. Louis, Illinois, in May and early July the same year.

Norfolk's Confederate monument had stood, with the statue of a flag-bearing soldier on top, since 1907, Baggarly said. The city removed it in June.

Across the street from the monument's base, Lavonne Pledger, 34, talked about what it was like growing up in a big house with his mother, grandmother and extended family and the challenges he faces today as a young father living in a public housing project now planned to be part of a massive city redevelopment project.

His grandmother and grandfather, who was a Coast Guard veteran who died before Pledger was born, were able to buy a home in Norfolk they liked, but they had to leave it as part of an earlier urban renewal program in the city, he said. His grandmother warned him not to let the same thing happen to him.

"Living in this moment is very personal to me because it happened to my grandmother and I'm trying to keep it from happening to an entire community of folks — and it looks like it's already starting to begin," Pledger said. 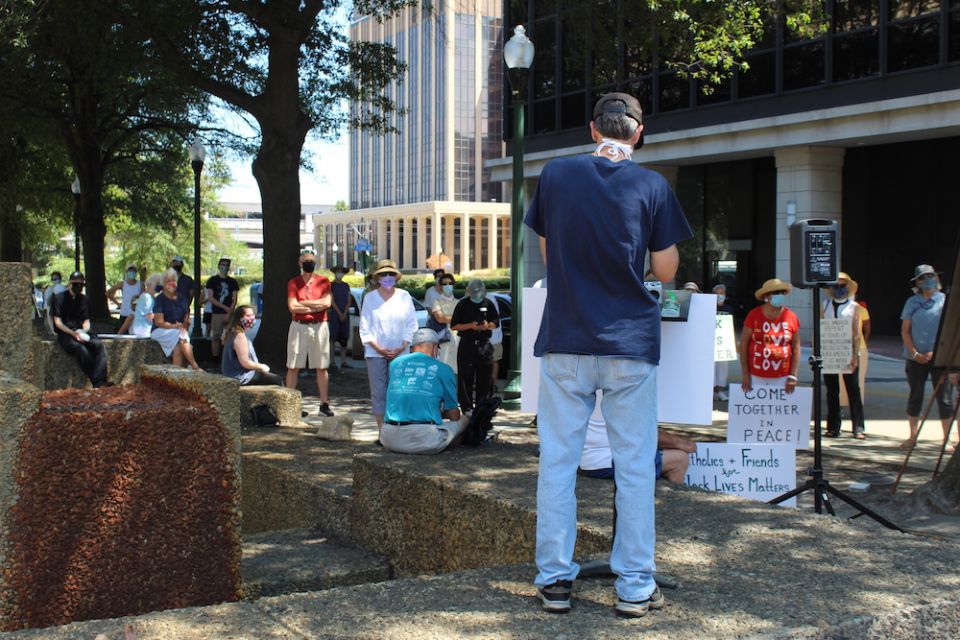 Steve Baggarly, co-founder of the Norfolk Catholic Worker, read a statement of purpose at the Norfolk pilgrimage site, just across the street from where the city's Confederate monument stood until its removal in June. (Robert McCabe)

The pilgrimage on July 28 in southeastern Virginia took place less than 25 miles from where the first African slaves arrived at what was then the British colony of Virginia, at what's now known as Point Comfort in Hampton, Virginia, in August 1619.

Pat Bernier, a member of St. Mark Catholic Church in Virginia Beach, was among those who participated.

"I'm here to just be in solidarity with the Black Lives Matter movement and the Tidewater Sowers of Justice and the call for action, the call for deepening our understanding and our commitment to change," she said.

"And I can't get away from the image — because we're in the age of virus now, right? — that this racism is like a retrovirus that's just attached itself to our national DNA."

Douglas-Cooke, 62, married her high school sweetheart, a "Navy guy," which brought her to the Virginia Beach area. She retired last year as vice president of Sentara Heart Hospital in Norfolk.

She has three granddaughters, who were particularly on her mind on the day of the pilgrimage.

"They are just starting, and I need to do this for them and for all of the children of the United States," she said. "And if we can do it in the U.S., then it spreads everywhere."

No matter how old people get, they can still learn, she added:

"To me, that is the foundation of why it is so important to educate my fellow white Americans because so many of them don't really realize — I can share personal stories with them of things that have happened to me just because of the car I was driving or the location I was in." 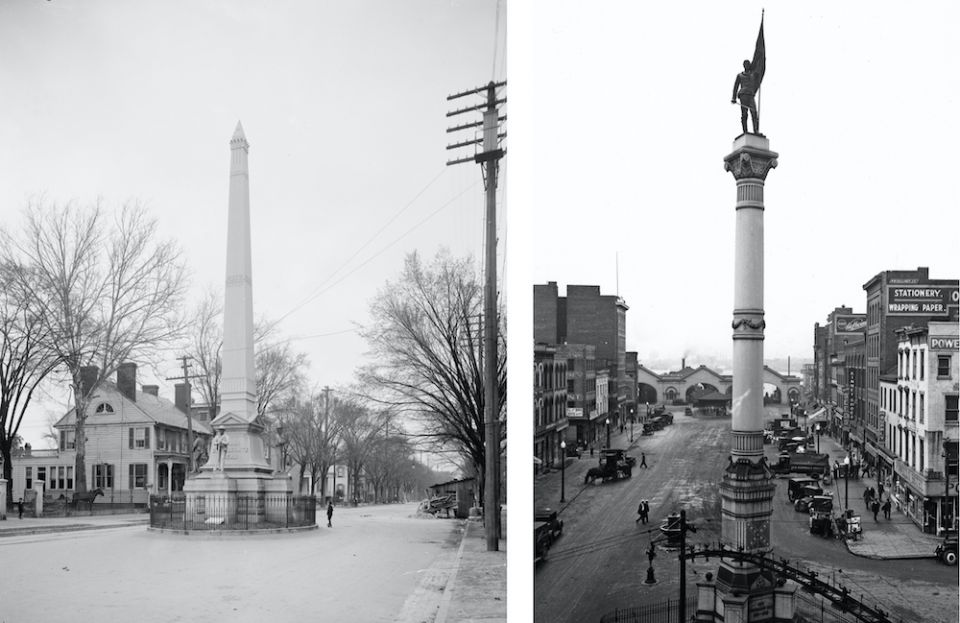 Left: Portsmouth's Confederate monument, seen here in 1905, was dedicated in 1893. (Library of Congress/Detroit Publishing Co.); Right: Norfolk's Confederate monument, seen here in 1940, was disassembled in 1965 when the city was undergoing redevelopment, and reinstalled in 1971 about 50 feet east of its first location, in the heart of Norfolk's downtown area. (Norfolk Public Library/Sargeant Memorial Collection)

[Robert McCabe is a former reporter for The Virginian-Pilot.]

Read this next: 'The life we've been living': Historic Black Catholic Church in Norfolk, Virginia, looks to the future