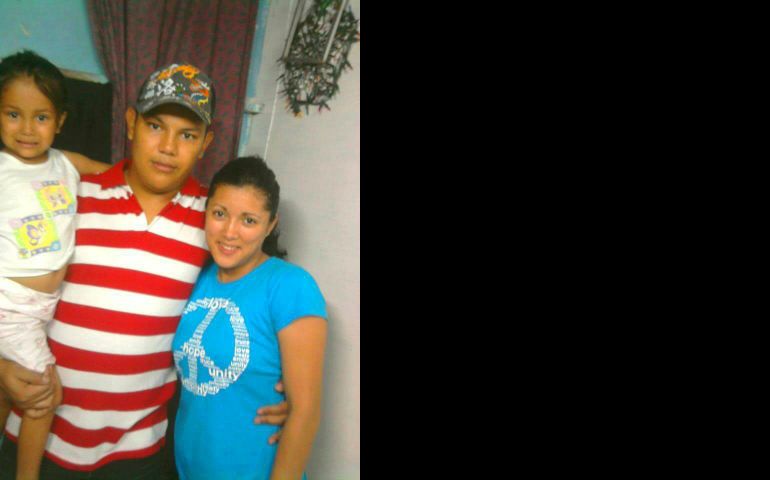 The author’s nephew, Johnny Javier, pictured with his family. Javier was killed Feb. 14, 2012, in a fire at a prison in Comayagua, Honduras. (Photo provided by Mary McCann Sanchez)

The fire that swept through the medium-security prison in Comayagua, Honduras, on the night of Feb. 14, 2012, took the lives of 361 individuals. Devastating flames danced high above the prison walls. Hundreds of prisoners — as well as spouses admitted for a rare conjugal visit — perished in the sudden inferno.

I lost my nephew, Johnny Javier, to that fire. The young man was locked in a wing of the jail where toxic smoke invaded, extinguishing any hope of survival. The scene was maliciously unreal. Firefighters arrived 40 minutes after the flames ignited, and first responders reported that guards with keys were nowhere to be found. Johnny and his cellmates died as captives.

An immensely painful personal tragedy? The loss of this young man was that and much, much more. The inability of the Honduran state to protect men held in its custody effectively fueled the incineration of hundreds of human beings. More than half of those imprisoned in Comayagua had never been tried or convicted of a crime, yet the lack of due process had metamorphosed into mass execution by fire.

My nephew’s case, however, had swiftly crossed desks in the court, where it was stamped and sealed and irrevocably filed away. In 2010, when Johnny was a 23-year-old taxi driver, he had fallen victim to a frame-up when an acquaintance asked him to moonlight in a stolen cab. Oblivious of the vehicle’s history, Johnny had accepted, anxious to supplement his scant income of $20 per day.

Soon after, Johnny was rounded up. An attorney appeared at the door of his in-laws’ home, where Johnny lived with his wife, Maribel, and their baby daughter. The lawyer convinced the young mother that a speedy admission of guilt would result in prompt release. Gathering the family’s savings, Maribel paid the lawyer and rushed to the prison where Johnny signed the papers that cost him his freedom.

Once aware of the travesty, our family sought the services of credible attorneys who attempted to reverse the lethal effects of the unscrupulous lawyer’s advice. The backlogged court, however, had no room for the case. The only out was early release for good behavior.

Johnny stoically accepted his lot. Trusting no one, he worked quietly in the penitentiary garden and sewed uniforms for prison guards.

Those of us who loved Johnny felt the grip of anxiety. Johnny was young and strong, a sure target for gang lords ruling inside and outside the jails. And if he could withstand peer pressure, would he survive the penitentiary itself? We knew prisoners went hungry. I personally had seen how men slept on shelves of cots stacked six high in a prison on the northern coast, where a riot and fire in 2003 left 86 dead.

Nagging questions, not limited to the jail, became part of our lives. Honduras had been hard hit outside the prison walls, too. The legacy of the June 2009 coup in Honduras — the first golpe de estado in Latin America of the century — was one of constricted civil liberties and alarming, unexplained killings of attorneys and journalists. Four judges lost their places at the bench for speaking out.

As Johnny toiled within the prison day after day, pressures mounted outside. Urban centers and rural plazas became home to the weekly protests. Teachers, factory workers, indigenous people, professionals and people of faith protested the systemic failure to deliver justice, inside and outside the jails.

In response, long rows of heavily shielded, helmeted police forces flanked public parks and thoroughfares in relentless shows of force. A young woman died in a protest, choked by tear gas, a precursor to the suffocation that Johnny and others would be subjected to.

The prison complex went up in flames, due to causes never adequately investigated nor explained. The families of 800 inmates awaited news. Which cell blocks burned? Which wings filled with smoke? Who had escaped?

My nephew was declared dead based on cot location. He could be any one of the scores of charred bodies. Our family joined other mourners to travel to the prison and then the capital, seeking his remains. White-jacketed technicians tied rubber sashes on the tiny arm of Johnny’s daughter, and drew blood in pursuit of a DNA match.

The forensic review lagged cruelly. It was Lent in Honduras and the penance was real. Ash Wednesday, Passion Sunday, Good Friday — Easter came and went with no resurrection, no tomb to visit, no body to behold. My husband took to the streets with other mourners, placards in hand, to demand an end to the uncertainty.

Fifty-eight days after the fire, Johnny’s widow was summoned to a morgue in the capital. An officer escorted her to a coffin, nailed shut. “Do not open this box,” he warned her, “you will find only bones.” She leaned heavily on Johnny’s two brothers, standing by her side.

In Honduras, it is common for the bereaved to say good-bye to those they love. Gazing into an open casket is the moment of release, a time when peace might begin to set in. Throughout Central America, tenacious searches for the remains of loved ones, followed by exhumation and forensic discovery, have contributed to processes to uphold fundamental human rights.

In the case of the prisoners, however, the long-overdue delivery of impenetrable vessels of bones and ashes failed to provide closure, to engender trust.

And yet, these families in Honduras achieved modest gains: a partial purge of abusive authority, initial steps in prison reform, and meager economic retribution.

And on the broader scale, other victories emerged. The Inter-American Commission on Human Rights upheld the right of free expression of the judges who had voiced opposition to the coup and demanded their restitution. Journalists exposed massive corruption at high government levels, despite backlash and punitive actions in what to this day remains an uphill struggle for the rule of law.

How does such suffering and such conviction speak to the Lenten journey and to the paschal mystery? The Via Crucis of the families required enormous fortitude. Intensely private love and separation by death transcended the realm of the individual into community and nation. Step by step, station by station, the cross passed from men and women present only in our hearts to unintentional communities of families and friends that rose to bear it.

Some years have passed since flames raged through the prison of Comayagua. As Lent begins, I am reminded that the suffering that penetrates this season is real and that sacrifice is more than self-deprivation. Clearly, Honduras is not the only country locked down by institutions too weak to uphold justice. Finding the answer to the age-old question of “Where is the victory?” has much to do with the struggle that we dare to take on and the companions that we will embrace on the journey.

[Mary McCann Sanchez is a teacher and writer with a long history of peacebuilding, social justice and community development work in Latin America and in Chicago.]

Perspective | The Via Crucis of Comayagua

Let's go back to basics for Lent during this pandemic year