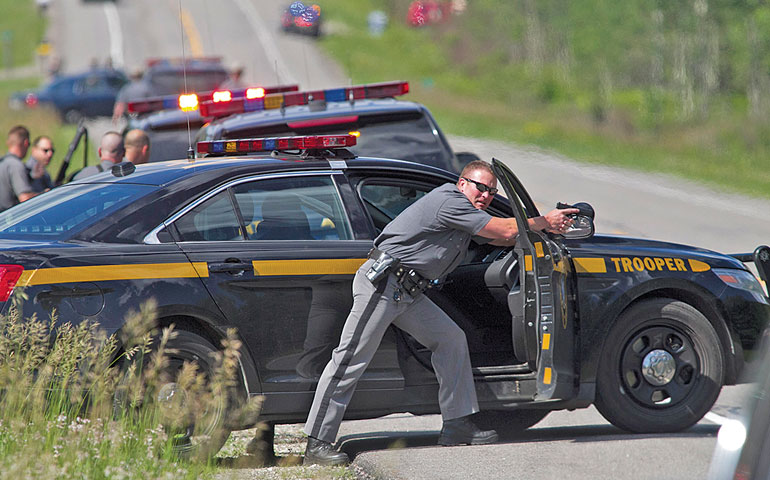 As a prison abolitionist, I was an immediate admirer of the two citizens -- Richard Matt and David Sweat -- who in early June, artfully and nonviolently decided to end their residency in the cages of the Clinton Correctional Facility in Dannemora, N.Y.

Yes, each was found guilty of homicides. Yes, the murders were vile: Matt dismembered his victim; Sweat shot a man and then drove a car over the body.

So why my admiration for the pair? And while we're at it, where do I get off calling them "citizens," rather than what most in the media were labeling them for the 23 days of the manhunt -- a couple of sadistic killers likely to murder again while they fled?

On the last point, both men were former killers. Who among us would want to be forever identified by the worst thing we ever did?

The Matt and Sweat escape, coupled with the three-week frustrations of 1,300 chasers from black-garbed local cops to assorted amateur bounty hunters, created a killers-on-the-loose hysteria. New York Gov. Andrew Cuomo hyperbolized that the escape is "a crisis situation for the state." He and other alarmist officials advised local residents to bolt their doors, load their guns, hunker down and sleep lightly: The bloodthirsty dangerous murderers could be anywhere. Check under your bed, too.

Demonizing the pair -- from news people repeatedly calling them ruthless killers to politicians like Cuomo seeing them as scheming desperados -- ran counter to the facts. Sweat, imprisoned in Clinton Correctional Facility for 12 years and Matt in for seven years, were so well-behaved that they were placed on the prison's honor block, which offered privileges denied other inmates.

Could it be that they were well on the way to self-reform, overhauling their lives that for both began in early childhood chaos in dysfunctional homes? By their early teens, they had had multiple arrests. The odds were long that Sweat and Matt could make comebacks. Call me addled, but the evidence suggests that they did, that a redemption of sorts had been underway.

That explains part of my admiration for the two. The other part is not complex.

If I were in prison, and especially so in a maximum security pen, I, too, would want to escape. Anyone would. The instinct for freedom is too powerful to subdue no matter how high the walls or how steeled the bars of a cell.

When the pair did get out -- carving, banging and tunneling their way to emerge from a manhole -- it meant America's gigantic penal system had two less human beings to victimize by inhumane punishment too long condoned by courts and legislatures.

What inhumanity? Excessively long sentences. Overcrowded facilities. Prisons that are dumping grounds for the mentally ill and addicted. Parole boards stuck in rigidities they would never impose on members of their own families. The constant threat of rape, knifings. Solitary confinement, of which Supreme Court Justice Anthony Kennedy spoke June 18 involving a California inmate who "has been held for all or most of the past 20 years or more in a windowless cell no larger than a typical parking spot for 23 hours a day; and in the one hour when he leaves it, he is likely allowed little or no opportunity for conversation or interaction with anyone." Harsh drug laws, cited by former Sen. Jim Webb when he stated recently that in 1980, 40,000 people were imprisoned on drug offenses, with the number now 500,000. Little or no access to psychiatric care.

Abolishing prisons is not a turn-'em-all-loose theory. For a start, it would mean more alternative sentences for nonviolent offenders and hospitalization for the mentally ill and addicted. The resulting and large decrease in numbers would allow confining violent people in humane settings where restorative, not punitive, justice prevails.

On June 26, Matt was needlessly killed, three bullets to the head. By the count of The Washington Post, he was one of 462 citizens shot and killed by police this year. At the end of the month, Sweat took two bullets, also needlessly fired, but he survived. At no time did either fugitive harm anyone.

"The nightmare is finally over," Cuomo said.

No, the real nightmare is that the nation's criminal injustice system remains as abusive as ever.

[Colman McCarthy directs the Center for Teaching Peace. His latest book is Teaching Peace: Students Exchange Letters With Their Teacher.]

A version of this story appeared in the July 31-Aug 13, 2015 print issue under the headline: Escapees captured, but US injustice system is as abusive as ever.