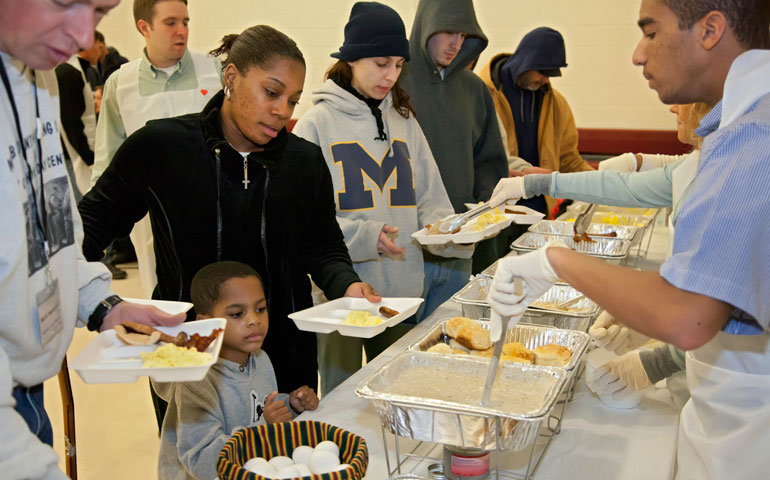 Volunteers serve breakfast to the needy at a shelter in Mount Clemens, Mich., in 2011. (CNS/Jim West)

America needs a comprehensive national strategy to end hunger, a strategy based on the fundamental human right to food.

In 1941, President Franklin Roosevelt proclaimed in his State of the Union address on the "Four Freedoms" that Freedom from Want is an "essential human right." The U.N. Committee on Economic, Social and Cultural Rights says that the human right to food is fulfilled "when every man, woman and child, alone and in community with others, has physical and economic access at all times to adequate food or means for its procurement." The United Nations also states that the right to food creates a legal obligation that requires governments to "pro-actively engage in activities intended to strengthen people's access to and utilization of resources and means to ensure their livelihood, including food security."

"Nourishing Change: Fulfilling the Right to Food in the United States," a report released in May by the International Human Rights Clinic at New York University School of Law, says that the "right to food recognizes individuals as rights holders, not simply recipients of government or private assistance." As a result, "governments are duty bearers that have a responsibility to ensure that the right to food is progressively realized for all individuals under their jurisdiction."

Food is a human right because food is essential to life. The government has a duty to ensure people's right to food.

Today, most people view charity, not justice, as the rationale for government programs and nonprofit efforts assisting America's food-insecure individuals and households. Even as these acts of charity go forward, the problem they are meant to solve grows more severe. According to "Nourishing Change," 20 million more people participated in the Supplemental Nutrition Assistance Program, or SNAP, in 2012 than in 2007, for a total of 46 million people, and since 2007, the number of persons receiving emergency food assistance has risen 60 percent. Still, in these times of recession, politicians and others in the public sphere argue for cuts in food assistance programs, as though the failure of these programs is the fault of the people suffering food insecurity, rather than the fault of a system that is based on neither the human right to food nor a comprehensive national strategy to end hunger.

After decades of failed efforts to end hunger with charity alone, in a land where there is no shortage of food resources but ever-growing numbers who do not have adequate food, America must adopt a new paradigm, a comprehensive national strategy that prioritizes the human rights of low-income or no-income Americans. This strategy must continue the programs already in place -- SNAP, the school breakfast and lunch programs, and WIC (the Special Supplemental Nutrition Program for Women, Infants and Children). These and private charity programs are critical to a successful national strategy. But a much broader approach, a comprehensive national strategy to achieve food justice, must be put in place.

What is such a strategy?

Once, the Rev. Martin Luther King Jr. dreamed of a multiracial "Poor People's Campaign" that would, in the words of historian Gerald McKnight, "force the government to respond to the needs of the ignored underclass." Then King was assassinated. His planned Poor People's March happened, but this dream was not realized.

I have a dream, too:

Nothing urges this dream in America more than the growth of the "ignored underclass" and the crisis situation of income inequality and food insecurity. Food-secure NCR readers are bound by the command to love our neighbor. What else can we do but respond to our brothers' and sisters' unending poverty with all of our being?

[Sr. Francine Dempsey is a member of the justice committee of the Sisters of St. Joseph of Carondelet, Albany, N.Y., and a member of the Hunger Action Network of New York State.]

A version of this story appeared in the Nov 22-Dec 5, 2013 print issue under the headline: Every person has a human right to food.