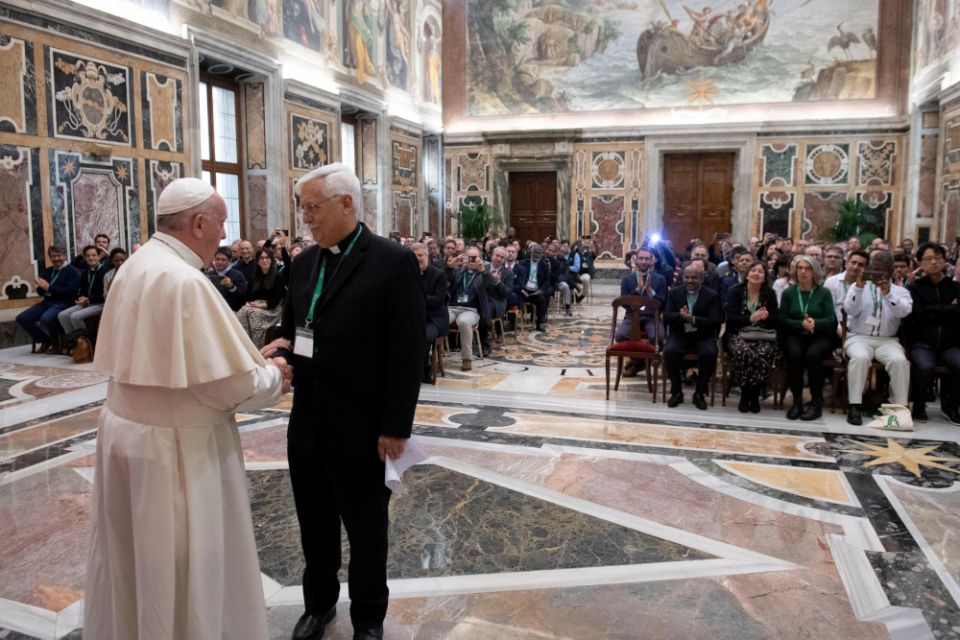 Pope Francis meets with members of the Social Justice and Ecology Secretariat of the Society of Jesus in the Vatican's Clementine Hall Nov. 7, 2019. (CNS/Vatican Media)

Vatican City —  At a time when "situations of injustice and human pain" seem to be growing around the globe, Christians are called to "accompany the victims, to see in their faces the face of our crucified Lord," Pope Francis said.

The pope spoke about the Gospel call to work for justice Nov. 7 when he met with about 200 people, Jesuits and their collaborators, celebrating the 50th anniversary of the Jesuits' Social Justice and Ecology Secretariat.

Listing examples of places where Catholics are called to work for justice and for the safeguarding of creation, Francis spoke about "a Third World War being fought in pieces," human trafficking, the growing "expressions of xenophobia and the selfish search for national interests," and the inequality between and within nations, which seem to be "growing without finding a remedy."

Then there is the fact that "never have we so hurt and mistreated our common home as we have in the last 200 years," he said, and that environmental destruction impacts the world's poorest people most of all.

From the beginning, St. Ignatius of Loyola intended the Society of Jesus to defend and spread the faith and to help the poor, Francis said. In establishing the Social Justice and Ecology Secretariat 50 years ago, Fr. Pedro Arrupe, then superior general, "intended to strengthen it."

Arrupe's "contact with human pain," the pope said, convinced him that God was close to those who suffer and was calling all Jesuits to incorporate the quest for justice and peace into their ministries.

For Arrupe and for Catholics today, attention to society's "discarded ones" and the struggle against the "throwaway culture" must be born of prayer and fortified by it, Francis said. "Fr. Pedro always believed that the service of faith and the promotion of justice could not be separated: they were radically united. For him, all the ministries of the society had to respond, at the same time, to the challenge of proclaiming the faith and promoting justice. What until then had been a commission for some Jesuits should become everyone's concern."

Francis said that when contemplating Jesus' birth, St. Ignatius encouraged people to imagine that they were there as a lowly servant, helping the Holy Family in the poverty of the stable.

"This active contemplation of God, of God excluded, helps us discover the beauty of every marginalized person," the pope said. "In the poor, you have found a privileged place of encounter with Christ. That is a precious gift in the life of the follower of Jesus: to receive the gift of meeting him among the victims and the impoverished."

Francis encouraged the Jesuits and their collaborators to continue to see Jesus in the poor and to listen to them humbly and serve them any way they can.

"Our broken and divided world needs to build bridges," he said, so that people can "discover in the least ones the beautiful face of a brother or sister in whom we recognize ourselves, and whose presence, even without words, demands our care and our solidarity."

While individual care for the poor is essential, a Christian cannot overlook structural "social evils" that create suffering and keep people poor, he said. "Hence the importance of the slow work of transforming structures through participation in public dialogue where decisions are made."

"Our world is in need of transformations that protect life that is threatened and defend the weakest," he said. The task is enormous and can cause people to despair.

But, the pope said, the poor themselves can show the way. They often are the ones who continue to trust and hope and organize to improve their lives and that of their neighbors.

A Catholic social apostolate should try to solve problems, Francis said, but, above all, it should encourage hope and promote "processes that help people and communities to grow, that lead them to be aware of their rights, to use their abilities and to create their own future."

Justice | Christians are called to serve Christ in the poor, pope says