Grassroots leaders to gather in California 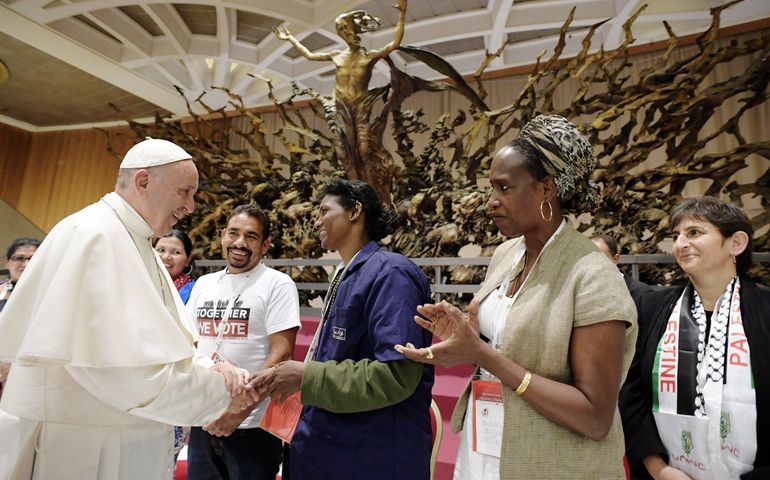 Pope Francis greets attendees during a Nov. 5 meeting at the Vatican with participants in the third World Meeting of Popular Movements. (CNS/EPA/L'Osservatore Romano)

Pope Francis has referred to them by several names: protagonistas, social poets, sowers of change.

They are the family farmer, the immigrant, the community organizer. People living in poverty who suffer injustice, be it economic, racial or social, and who struggle against it. Workers in cities and countrysides with feet deep in the mud of an economy of exclusion and a throwaway culture that casts them aside. Those clamoring for the “sacred rights” of labor, lodging and land.

In February, their cohorts in the United States will convene in California’s Central Valley for a regional meeting of the World Meeting of Popular Movements -- a project embraced by Francis and meant to demonstrate the church’s closeness to those struggling for human rights and a process for structural change in their worlds.

More than 500 grassroots leaders from across the country are expected to partake in the regional meeting Feb. 16-19 in Modesto, Calif., part of the Stockton diocese.

After three international assemblies -- two in Rome and one in Bolivia -- the World Meeting has begun to move toward such regional gatherings. The Modesto meeting is sponsored by the Vatican’s newly formed Dicastery for Integral Human Development, the U.S.-based PICO National Network of faith-based organizers, and the Catholic Campaign for Human Development, the anti-poverty program of the U.S. Conference of Catholic Bishops.

“The gathering is about the dignity of all people, which we don’t receive from any government; it’s something we are born with,” dicastery prefect Cardinal Peter Turkson, who will be in Modesto, said in a statement.

As many as three dozen U.S. bishops are expected to attend, including many from California; the pope is anticipated to appear via video stream. Other participants will include immigrant rights activists, indigenous peoples, low-wage workers, formerly incarcerated individuals, small farmers and members of the Black Lives Matter movement.

The impetus behind the World Meetings has been Francis’ desire to create a direct channel to grassroots leaders across the world, said Joseph Fleming, PICO’s Catholic engagement coordinator. It’s a type of encounter that dates back to his experience as archbishop of Buenos Aires, Argentina, working with waste-recyclers pushing for health benefits and fair wages.

“It’s been very clear that Pope Francis himself is wanting to directly experience what racial and economic exclusion [is], how that has been experienced by marginalized groups of people around the world. And not only how they experienced, but how they are organizing to address it and to overcome it,” he told NCR.

The pope speaks often about the importance of people coming together, added Ralph McCloud, director of the Catholic Campaign for Human Development. “That when folks are isolated and separated, that oftentimes the issues aren’t heard. And if they aren’t heard, they aren’t addressed.”

It wasn’t logistical convenience that landed the meeting in Modesto. Rather, the planners saw in the agriculturally lush Central Valley a region that in recent years has experienced many of the issues raised by Francis and past World Meetings, issues such as income inequality, environmental degradation, immigration and labor strife.

The U.S. meeting will extend the core World Meeting scope of labor, lodging and land -- in Spanish, the three “T’s” of trabajo, techo y tierra -- to also examine immigration and racism. The primary goal begins with encounter and dialogue, in bringing workers and advocates from diverse backgrounds and cultures together to share their stories.

An equally important goal is for the church to hear in an unfiltered way the pains, anxieties and fears of the people, as well as their resistance, Fleming said, and to renew its “historic solidarity with social justice movements.”

“What we are believing and trusting is that through encounter and dialogue the bishops’ natural instinct to stand with their people will be deepened, and their creativity and their imagination around how that can be done, we believe, will be enhanced,” he said.

Since the first World Meeting in Rome in 2014, the event has become a venue for some of Francis’ fiercest critiques of a global economy he says idolizes money and places profits before people. At the second meeting, held in Santa Cruz de la Sierra, Bolivia, the Argentine pope delivered perhaps the defining speech of his 2015 trip to Latin America.

“Do we truly realize that something is wrong in a world where there are so many farmworkers without land, so many families without a home, so many laborers without rights, so many persons whose dignity is not respected?” he asked.

“So, if we do realize all this, let’s not be afraid to say it: We need change; we want change.”

The future of humanity does not lie solely in the hands of great leaders, the great powers and the elites. It is fundamentally in the hands of peoples and in their ability to organize. It is in their hands, which can guide with humility and conviction this process of change. I am with you.

At the third World Meeting, in November back in Rome, organizers of the upcoming Modesto meeting, who began their planning in mid-2015, joined the U.S. delegation to get a glimpse of the convening’s structure as well as to experience its spirit.

“It was overwhelming,” McCloud said, “... to be in the same room with persons who were slum dwellers and homeless, and persons who were responsible to pick up trash to recycle. And to listen to them to discuss their plight and their hope for brighter days, not just for themselves but for the generations that follow.”

At the meeting’s end, Francis spent more than an hour with the participants, encouraging them to build bridges and to overcome fear and terrorism bred from control of money and power through love and mercy.

During the third World Meeting, the U.S. delegation, which included Bishops Stephen Blaire of Stockton and Shelton Fabre of Houma-Thibodaux, La., heard people describe life in the throwaway culture: feeling neglected and forgotten by an economy that, rather than helps, often feels like it attacks -- themes that resonated with what they’ve heard back home, made louder by the 2016 elections.

“It really feels like it’s shaping up to be a defining time within the history of our nation,” Fleming said.

That idea of “we are at our best when we are together” is one he hopes the regional World Meeting can lift up as a counternarrative to others that emerged during the presidential campaign -- primarily, narratives expressing xenophobia, racial hierarchy, and inequality as a result of scarcity.

McCloud said that polarization in the nation is apparent and that people of all backgrounds have voiced a sense of struggle. The trick at the regional meeting now is to get those who feel marginalized outside their silos and to recognize the common cause among their many concerns.

“The timing is the timing. Obviously, we started the planning long before the election. ... Our approach is that we have to work hard to look at ways we might be able to alleviate the struggling or the suffering of folks,” he said.