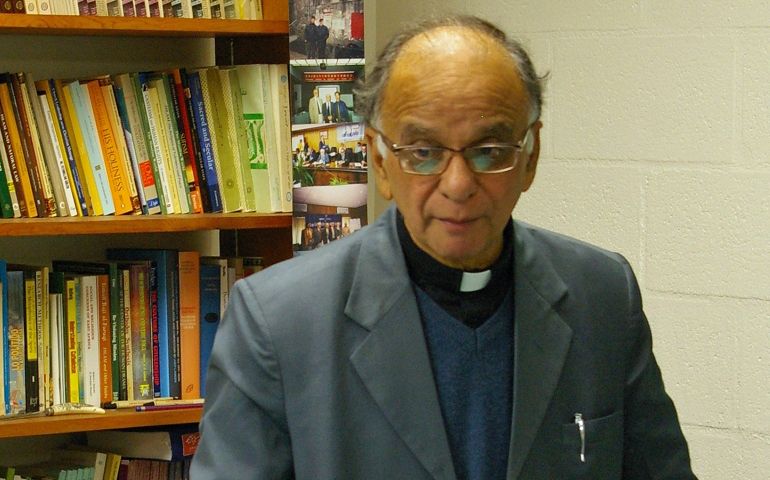 Washington — A key mission of Catholics should be to reduce anger among people, says a retired Indian archbishop noted for his peacemaking efforts.

Speaking last week to a group of scholars engaged in some of the world's most long-lasting conflicts, Archbishop Thomas Menamparampil put the mission of anger reduction in terms of a prayer said during the Catholic Mass.

Menamparampil was nominated for the Nobel Peace Prize a year before retiring from northeast India's Guwahati archdiocese in 2012. He also has served as an official of the Federation of Asian Bishops' Conferences and helped organize last year's Synod of Bishops on the topic of the new evangelization.

The archbishop was invited to take part in the last session of a five-week seminar at The Catholic University of America on different cultural understandings of justice and responsibility. During his session Oct. 11, Menamparampil, whose diocese borders Bhutan, Burma and Bangladesh, talked about his efforts to work with ethnic tribes to resolve decadeslong disputes.

Explaining that there are about 200 ethnic groups in his region, accounting for 10 million to 15 million people, the archbishop said his first goal is to bring together those from all sides of the conflict in an attempt to "bring down the anger."

"Jesus was in agony in the garden. He took the sinfulness of humanity upon his shoulders. It's a great burden," he told NCR after the seminar. "When we therefore share in taking away the anger of the world, even some, it means at a mystical level we can share the agony of the world as Jesus did at that moment."

He told the group that in trying to start a dialogue, he chooses people who are not political leaders but are instead "respected and known members of society who do not have a vested interest," people such as poets, professors and scientists.

"Looking at the pain of the other, that's our main strategy or main method of approach," he said.

"Can we bring down the anger in a human way?" the archbishop asked. "Can we all, together, continue toward solutions to big problems?"

"People in authority will listen," he said. "They cannot ignore us all together."

Speaking to NCR after the seminar, Menamparampil focused on the topic of evangelization of the Catholic faith, saying he prefers to think of evangelizing in terms of "whispering" rather than "proclaiming."

"Rather than teach someone else, can we whisper in the right time?" he asked. "Can we prompt a tone of humility and be a co-searcher, fighting for the rights of others? Would it not have better acceptability?"

The archbishop also praised the tone Pope Francis has used in engaging Catholics, saying the pontiff is "so close to the average person, the average believer."

"[The pope] understands their struggle to be close to the Gospel," Menamparampil said. "He understands even their failure -- not to say it is OK, but he understands so that they are encouraged to make an effort more."

"Pope Francis speaks like a missionary, really," he said. "He's inviting us to be very daring in showing our commitment to humanity and to the outskirts of humanity."

The Catholic University seminar, hosted jointly each year by the university's Center for the Study of Culture and Values and the Council for Research in Values and Philosophy, brings together scholars from around the world for a monthlong study on a cross-cultural issue. This year's participants came from places including Italy, the Philippines, Nigeria and Ukraine.

[Joshua J. McElwee is NCR national correspondent. He is a graduate of The Catholic University of America. His email address is jmcelwee@ncronline.org. Follow him on Twitter: @joshjmac.]

Raising the minimum wage an economic and moral necessity

Our Matthew 25 duty on the US-Mexico border