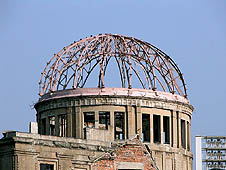 The A-Bomb Dome, the nearest building to survive the Hiroshima bombing (Photo by Jesse Wilson)

TOKYO -- Bishops from Hiroshima and Nagasaki have called on world leaders to work towards the total abolition of nuclear weapons.

In an open letter to U.S. President Barack Obama and the Japanese Government, the bishops said it was time to take the "courageous step."

"Nuclear weapons deprived over one hundred thousand people of their lives in an instant at the end of the previous world war. And bomb survivors continue to suffer physically and spiritually even now," Archbishop Mitsuaki Takami of Nagasaki and Bishop Atsumi Misue of Hiroshima wrote. The letter was dated Feb. 26.

"We…demand that the President of the United States, the Japanese government and the leaders of other countries make utmost efforts to abolish nuclear weapons."

The bishops described it as "sad and foolish to abuse the progress that humanity has made in the fields of science and technology, in order to destroy lives as massively and swiftly as possible, and to earn more profit by producing weapons!"

They said that there are currently more than 20,000 nuclear weapons in the world and it was "essential" to reduce the number.

The bishops urged world leaders to reach an agreement on reducing nuclear weapons at the Nuclear Security Summit in April and the Review Conference of the Nuclear Non-Proliferation Treaty (NPT) in May.

"We sincerely hope that world leaders will reach an agreement to take a secure step toward the abolition of nuclear weapons, beyond their own interests," the two men said.

They said the Japanese government "seems to have an extremely passive attitude to nuclear arms reduction policies, not to mention the abolition of such arms."

They said Japan should demonstrate and implement what it will do toward the total abolition of nuclear weapons.

"Take a courageous step toward the total abolition of nuclear weapons and the realization of a world without wars."

Listening to this generation's call to resurrection

A victory for the dignity of work