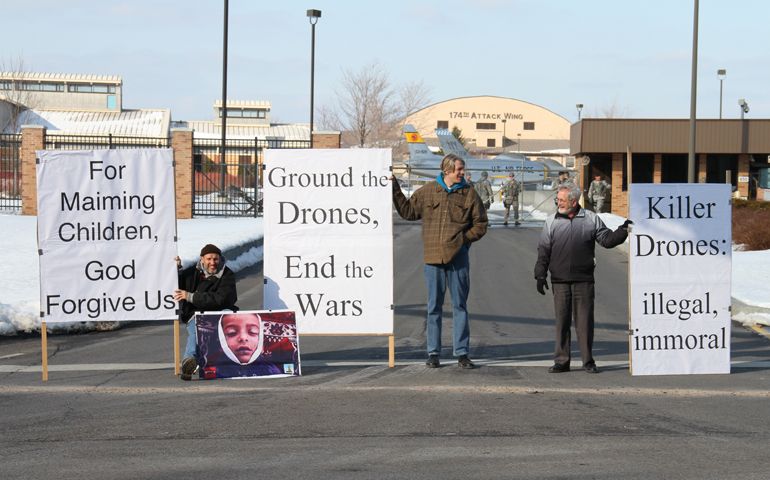 Linda LeTendre expected to spend the last week of October and the first week of November in the clinker. The licensed social worker from Albany, N.Y., was one of five Catholic activists who stood trial Oct. 24 in DeWitt, N.Y., for disorderly conduct, a charge stemming from an anti-drone protest at nearby Hancock Field Air National Guard Base last Ash Wednesday.

Located in Syracuse, Hancock is home to the 174th Attack Wing of the Air National Guard and a "drone hub" where operators remotely guide unmanned, weaponized aerial vehicles to launch strikes in Afghanistan.

Anti-drone activists have been protesting at the base since 2009, and Judge Robert L. Jokl Jr., who tried LeTendre's case, has sentenced some of them to 15 days in the Onondaga County jail. According to LeTendre, Jokl hinted during a pretrial meeting the same fate awaited the Ash Wednesday activists.

Instead, after declaring he wanted to find the five guilty, Jokl sent them home. The prosecutor, he noted, had failed to prove mens rea Latin for "guilty mind," or in this case, criminal intent.

"It was shocking, a small miracle," LeTendre said.

The "miracle" in DeWitt came amid a time of unusual public scrutiny of U.S. drone strikes, a counterterrorism tactic that has remained shrouded in secrecy even as its use has expanded. In October:

Oct. 24 was the second night of the World Series, and although prosecutor and defendants joked about getting home in time to watch the game, no one did. The trial, which began at 5 p.m., ran into the night. Some present attributed Jokl's remarkable verdict to an unusually convivial atmosphere in the courtroom, one that allowed for candid exchanges between defendants and judge. Others noted that legal technicalities assisted the activists' case.

"I think we wore the judge down," said defendant Bill Frankel-Streit, who likened the hours in the courtroom to the Gospel story of the unjust judge and the importunate widow. A founding member of the Little Flower Catholic Worker in Trevilians, Va., Frankel-Streit estimates he has been on trial at least 25 times for nonviolent protests.

"DeWitt was one of the better trial scenes," he said. "We were all on the same page. We were all coming at it from a faith-based perspective." Others on trial that night were Carmen Trotta of St. Joseph Catholic Worker in New York City; Ellen Grady of the Ithaca, N.Y., Catholic Worker; and Fr. Bill Pickard, a chaplain at St. Joseph's Center, Scranton, Pa.

All five defendants opted to argue their case pro-se -- without a lawyer -- giving their testimonies in long narratives. Frankel-Streit said they had little time for pretrial planning and "spoke from impromptu inspiration. The prosecutor did not object. The judge let us go on and on. There was an awful lot of witnessing as well as testifying."

The long narratives enabled the activists to speak often of their intent -- a key detail in determining conviction. The New York statute defines disorderly conduct as acting "with intent" to cause public inconvenience or alarm.

"We told the judge we had gone to Hancock not to be disorderly but to bring order to a disordered place," Frankel-Streit said.

LeTendre's testimony emphasized a technical point: The Ash Wednesday arrest occurred at the gate of a military base, not in a public setting, as the disorderly charge required. "Had we been accused with trespassing we would have gone to jail," she said.

But the DeWitt trial seemed to involve more than a parsing of legal technicalities. Several present that evening described pointed and earnest exchanges between the judge and defendants.

LeTendre told Jokl she believed "the first victims of an unjust law are those who have to enforce it. I told him people were praying for him. He tried to laugh it off a bit. 'You mean people are praying for me right now?' he asked and then, after a couple of seconds of silence, said, 'This is not easy.' I said I knew it wasn't, and that's why I asked people to pray for him. What I said after that was, 'What legacy do you want to be able to say you left your grandchildren?' "

Sporadically used during the Bush administration, drone strikes dramatically increased in frequency and scope under the Obama presidency and are now a key component of the U.S. counterterrorism strategy. The U.S. has conducted drone attacks in Afghanistan, Iraq, Libya, Somalia, Yemen and, most notably, Pakistan. By 2009, the U.S. carried out between 45 and 52 drone attacks in Pakistan. That number reportedly increased fivefold, to 292, during the first three and a half years of Obama's presidency, according to a 2012 drone report by Stanford University and New York University.

Prior to 2007, U.S. drone use was confined to "personality strikes" directed at allegedly high-value militants. Under Obama, the program has expanded its reliance on "signature strikes," targeting people based on what U.S. authorities call a "pattern of life" analysis.

Until recently, this expansion occurred covertly with the U.S. government refusing to publicly acknowledge the strikes. To date, crucial details about the drone program remain secret. The two U.N. reports, issued in October, specifically criticized this lack of transparency.

"Drones are not inherently illegal weapons," said Christof Heyns, U.N. special rapporteur on extrajudicial, summary, or arbitrary executions and author of one of the reports. "But we need to focus on their use. A world where multiple states use such weapons in secrecy is a less secure world."

Human rights researchers in Yemen were far more unequivocal in their October report on U.S. drone strikes, calling them "targeted assassinations" that should be qualified as extrajudicial executions, a violation of international human rights law.

But the Catholic activists were most concerned about the killing of human beings by these weapons. An excerpt from their statement delivered to the military base on the day of the February protest read: "We come to Hancock Airfield ... this Ash Wednesday, to remember the victims of our drone strikes and to ask God's forgiveness for the killing of other human beings, most especially children."

At the trial, Grady held up three photos to Jokl. Two were of children killed by U.S. drone strikes, which included Abdulrahman al-Awlaki, a U.S. citizen and 16-year-old son of Anwar al-Awlaki, a Yemeni cleric and U.S. citizen also killed by a drone strike in a separate incident. The third photo was of Abdulai, a member of the Afghan Youth Volunteers for Peace. Grady told the judge, "[Abdulai] is still alive, and he wants peace."

Jokl's acquittal is believed to be a first for anti-drone protests. That it indicates a new judicial sympathy for the activists, who are showing up with increasing frequency in the DeWitt courthouse, is doubtful. Days after the Oct. 24 trial, Judge David S. Gideon, who also rules in the DeWitt circuit, reissued an "order of protection" against a group of anti-drone activists arrested during a wave of protests at Hancock in the fall of 2012. The group has yet to go to trial.

Typically used in circumstances of domestic abuse, the restraining order was imposed at the behest of Col. Earl Evans, a base commander at Hancock. It prohibits the activists from being in the environs of Evans personally as well as the military base and comes with a maximum penalty of seven years in jail.

Mary Ann Grady Flores, Grady's sister, was among those Gideon called to court in late October. Grady Flores said the activists, who include grandparents, retirees and a former mayor, were asked to sign a document agreeing to abide by the order.

"It was an insult, an improper application of the law. We told the judge we were at the base to call to attention to the drones, not to 'molest, sexually assault, annoy, or harm' Col. Evans. In fact, we were trying to prevent harm for Pakistani and Afghan children living under drones. So everybody refused to sign," she said.

Gideon also gave the group a Dec. 12 trial date for their October 2012 protest at Hancock. The assistant district attorney has since requested the trial be postponed until January.

The recently exonerated Grady says more protests at Hancock are in the making.