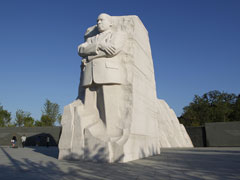 A 30-foot sculpture of the Rev. Martin Luther King Jr. is seen Aug. 22 at a memorial to the civil rights leader on the National Mall in Washington. (CNS/Bob Roller)

Except when it’s a rare sure thing, I stay clear of gambling. In recent years, the one bet I’ve been making with certainty -- besides the wager that Sarah Palin’s goofiness will continue to entertain America -- is that the designers of the new memorial to Martin Luther King Jr. in Washington would trivialize his message.

My specific bet? That the inscriptions sculpted in granite would not include the two most powerful, prophetic and daring lines in the fury-filled sermon that King delivered April 4, 1967, in Riverside Church in New York at the height of the Vietnam War:

Neither line is at the memorial. My bet was safe. Fourteen quotes were chosen: inspiring quotes, of course, but inoffensive. The above lines assuredly did offend people, with swift kicks quickly coming from the establishment media and other guardians of probity.

The oracles of TIME magazine called the sermon a “demagogic slander that sounded like a script for radio Hanoi.”

The Washington Post editorialized: “Many who have listened to [King] with respect will never again accord him with the same confidence. He has diminished his usefulness to his cause, his country, his people.”

The New York Times piled on with “Dr. King’s Error,” an editorial dismissing him as a lightweight for linking foreign policy in Vietnam with domestic policy at home: “This is a fusion of two public problems that are distinct and separate. By drawing them together, Dr. King has done a disservice to both. The moral issues in Vietnam are less clear-cut than he suggests; the political strategy of uniting the peace movement and the civil rights movement could very well be disastrous for both causes.”

The electronic media took their shots as well. King appeared on “The Mike Douglas Show,” where the host, along with nightclub crooner Tony Martin, posed questions designed to make King appear unpatriotic and unbalanced. The entire show, aired Nov. 2, 1967, can be found on YouTube.

Last month, with the memorial about to be unveiled, both the Times and Post were effusive with praise for the life of King. He “was a true prophet,” said the Times. The Post hailed him for his “great insight” that in 1963 the time had come for “equal justice under the law.”

No deep thinking is needed to explain how the papers went from criticizing King in 1967 to rhapsodizing him in 2011. The antiwar King was an unruly irritant who saw his government as a ruthless menace to peace, fighting a war it couldn’t win or afford. Both the Times and the Post were early supporters of the Vietnam War, as they were of the 1991 invasion of Iraq and the 2001 invasion of Afghanistan.

What King said in the Riverside Church sermon is as relevant today as it was then. Is it imaginable that if he were living now and beholding the Bush-Obama war policies in Iraq and Afghanistan, he would tone down his rhetoric and calm his fury? That’s no more imaginable than Barack Obama, in his next foreign policy speech, quoting the above lines of the antiwar King.

In the summer of 1966, I went to Chicago to write a story for NCR about King’s efforts to integrate housing in the all-white suburbs west of the city. He was exhausted, all but convinced that fighting racism in the North might become as vicious as it was in the South. He had been on the civil rights barricade for more than a decade. Speaking out against the Vietnam War appeared to reenergize him, putting him in touch with the antiwar left who were then filling the jails for their dissidence. Signing on, he said of the war: “This madness must cease.”

That, too, is not a quote to found in the memorial. Nowhere to be found, either, is the word nonviolence. For the real King, the fiery and not the mythologized one, we’ll need to look beyond statues and find our own way to keep faith with his radical legacy.

Memorial open, dedication scheduled
The Rev. Martin Luther King Jr. memorial opened to the public Aug. 22. It will be dedicated Oct. 16. The dedication had been scheduled for Aug. 27, but was postponed because of the impeding threat of Hurricane Irene. The memorial is on parkland near the Tidal Basin, between the Lincoln and Jefferson memorials. The Washington Monument and the Franklin D. Roosevelt memorial are nearby.

Catholic theologians weigh in on protests, call for 'police reform and racial justice' in America