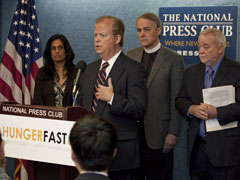 WASHINGTON -- In the last days of Lent more than 36,000 Americans joined a liquid-only fast to protest congressional budget cuts that fall most heavily on the backs of the poor, according to organizers.

Leading the protest were the Rev. Jim Wallis, founder of Sojourners and a noted evangelical figure in social justice, and former Ambassador Tony Hall, executive director of the Alliance to End Hunger.

Spokesmen for the U.S. Catholic bishops also warned against “disproportionate cuts in essential services to poor persons” as Congress tries to hammer out a fiscal 2012 budget agreement.

In a letter April 13 to members of the House of Representatives, Bishops Stephen E. Blaire of Stockton, Calif., and Howard J. Hubbard of Albany, N.Y., acknowledged that the government faces tough choices in seeking to reverse the federal deficit, but added: “We also fear the human and social costs of substantial cuts to programs that serve families working to escape poverty, especially food and nutrition, child development and education, and affordable housing.”

In its continuing resolution on the fiscal 2011 budget, passed at the last minute in early April to avoid a government shutdown, Congress especially targeted programs for the poor at home and abroad in its $38 billion in budget cuts.

Republicans in Congress have been pressing for more of the same in the 2012 budget, including moves to shift a portion of Medicare, the federal health care program for the elderly, to private insurance programs.

Wallis and Hall announced the Hunger Fast March 28, as Congress was struggling to pass a fiscal 2011 measure that would avert a government shutdown April 8.

After that measure passed, Wallis said, “The government didn’t shut down but the budget crisis has not been averted.”

“This compromise represents the interests of all those who make big campaign contributions but betrays the poor and vulnerable,” he added. “Our endless military spending has gotten another free pass while those who can least afford it are getting cut. This compromise has only strengthened my resolve to continue fasting, and we call for any person of faith or conscience to keep joining the fast and spreading the word.”

As the end of Lent neared, Sojourners said that more than 36,000 activists, including more than two dozen members of Congress, had joined the liquid-only fast.

News and commentary on the fast appears on the Internet at hungerfast.org.