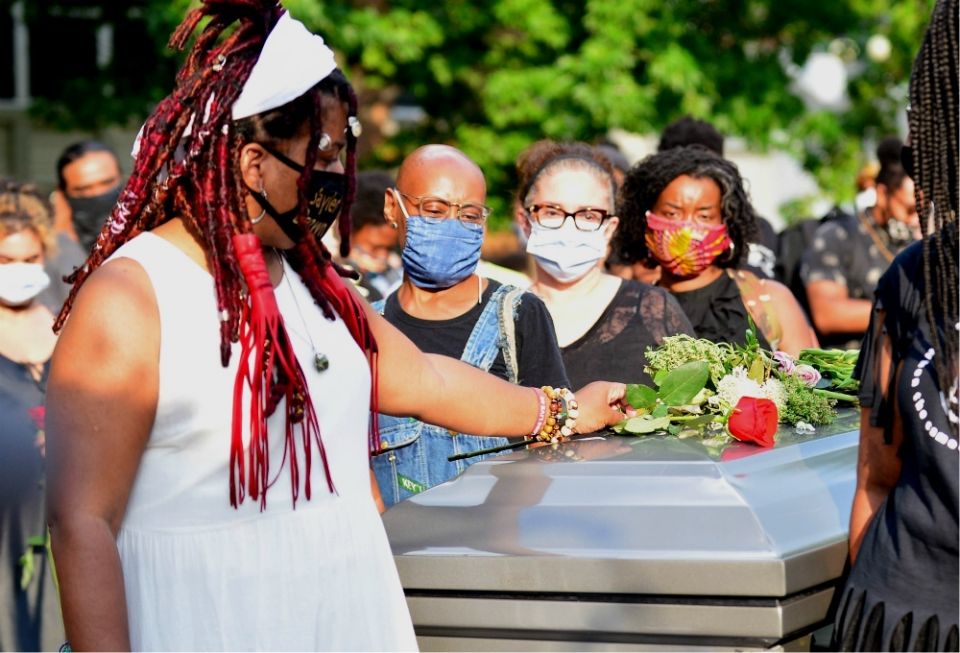 Dannielle Brown places flowers on an empty casket during her "living funeral" in Pittsburgh on Aug. 6, more than a month into her hunger strike. Brown told NCR on Aug. 31 that she is not sure she will survive her strike, and that she wants to be remembered as someone willing to lay down her life for other mothers and their children. (Ed Thompson)

After roughly two months without solid food, the mother of a deceased Duquesne University student persists in a hunger strike to reform the university's campus police and investigative practices at the Pittsburgh Catholic school founded by the Spiritan Fathers, but the school insists it is already making such changes.

Dannielle Brown's son, Marquis Jaylen "J.B." Brown, was an accomplished student and football player for Duquesne. His mother described him as an old soul, who studied Spanish and enjoyed traveling and graphic design.

"When he was a baby, he was not a crying child," Dannielle Brown said. "He was very mild-spirited. And it was almost too good to be true. Jaylen was just an awesome kid."

It was a cool October night in 2018. Jaylen Brown had just turned 21 that week, and he was excited to celebrate with friends, his mother said. He had gotten his hair cut for the occasion.

According to a police report published in February 2019, Duquesne University Police and campus security officers responded to a call around 10 p.m. the night of Oct. 4 for a "possible fight among roommates" but found that there was no fight and that Brown's roommate was trying to "calm" him.

Shortly thereafter, the report says, eyewitnesses reported Brown picked up a chair, threw it at the window and jumped out, falling from the 16th story of the dorm.

The police report says there was no altercation between Brown and the police, but Dannielle Brown said she doubts the police narrative of what happened. She said her son didn't have a history of mental illness, and it's hard for her to imagine that he would die by suicide.

She wants campus police to be equipped with body cameras and more carefully trained in mental health crisis intervention, to ensure the safety of Black students like her son at the predominantly white college. She also began her hunger strike demanding full access "without stipulations" to any investigative documents related to her son's death.

"As moms ... We're so busy raising our children and making sure they're safe and healthy, and protecting them, we don't make a lot of noise. Until you mess with our children," Brown said. "Then you get that extraordinary strength, that superwoman strength, that strength that says, 'I'm a mother bear, and ... I'm ready to eat you alive because you came for my cub.' "

Since July 4, she hasn't eaten any solid food, subsisting only on coffee, Gatorade and other liquids. Aside from a trip to her home in Washington, D.C., for the 57th anniverary of the March on Washington Aug. 28, she's been sitting on Freedom Corner in the Hill District, a historically Black neighborhood in Pittsburgh overlooking Duquesne's campus, and has even camped there many nights. 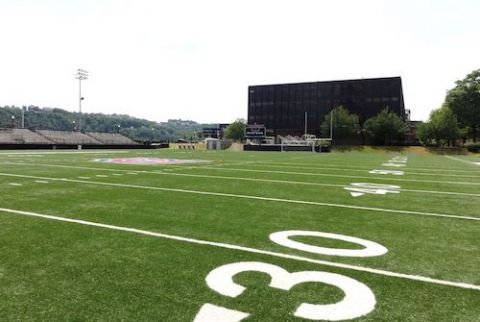 The university said in a statement Aug. 12 that representatives have met with Brown and her former attorney. Gabe Welsch, vice president of marketing and communications at Duquesne University, said in an email to NCR that the university offered to give her access to documents from their internal investigation of the incident, but that she has not provided "paperwork legally required to protect personal information."

Welsch also said the university is "in the process of acquiring the body cameras" and plans to equip all active-duty campus police with cameras. He also said the Duquesne campus police undergo "extensive training" to be accredited and that there was "absolutely no evidence of the University's public safety officers acting inappropriately in any way" in Brown's case.

Brown said she wants to see tangible proof that the university is purchasing the equipment and that its officers will receive mental health crisis intervention training beyond just watching a video. And on her social media platforms, she's criticized the university for requiring her to sign a non-disclosure agreement to access the investigative files, saying this would hamper her ability to conduct an independent investigation.

In a public Facebook post on Aug. 23, she said she was refocusing her demand for information to advocate that any parent whose child dies at the institution be provided with "ALL information concerning their [child] experiencing a crisis situation that has [led] to death under questionable circumstances."

She added, "It is pure torture to make any mother wait for months to get detailed information about what happened to their child!"

The Black-led activist and artist collective 1Hood Media has posted on social media in support of Brown since the early days of her protest. Hundreds of community members have turned up to support her at Freedom Corner, and at a "living funeral" march she staged on Aug. 6, more than a month into her hunger strike.

On their pilgrimage to the March on Washington, relatives of George Floyd, a Black man killed by police in May, stopped by to see Brown on Aug. 18 and express solidarity with her struggle, according to CBS Pittsburgh.

Local faith-based groups have also begun to speak out in support of Brown, including Casa San Jose, a community resource center for Latino Pittsburghers founded by the Sisters of St. Joseph of Baden.

In a statement, the group said Duquesne, like other predominantly white institutions, needs to take accountability for historically failing to protect and uplift Black students and students of color, and to "commit to anti-racism."

Monica Ruiz, executive director of Casa San Jose, likened Dannielle Brown's situation to that of Latin American mothers whose children die while crossing the border. They are too often unable to get answers about their children's deaths, and justice can be elusive, she said.

"Had [Jaylen Brown] been a white child, we wouldn't be having this conversation," Ruiz said.

Welsch contests the idea that racism has played a role in either Jaylen Brown's death or in the university's treatment of his mother, pointing to the establishment of an advisory council on diversity and inclusion and a support group for Black students within the past three years as a sign Duquesne values Black students. Out of nearly 9,000 students at Duquesne in 2020, just 5.4% were Black.

The Pennsylvania Interfaith Impact Network also supports Brown. The network is a social justice-oriented coalition of congregations in Southwestern Pennsylvania that includes Catholic, Protestant, Jewish and Muslim faith communities, among others.

Brown said she plans to continue her hunger strike until the university proves that it is complying with her demands. She said she never wants another parent to endure the pain and loss she's gone through.

A version of this story appeared in the Sept 18-Oct 1, 2020 print issue under the headline: Mother continues hunger strike .