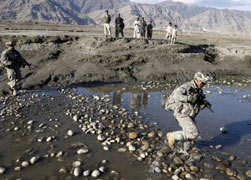 If the U.S. public looked long and hard into a mirror reflecting the civilian atrocities that have occurred in Afghanistan, over the past ten months, we would see ourselves as people who have collaborated with and paid for war crimes committed against innocent civilians who meant us no harm.

Two reporters, Jerome Starkey of The Times of London and David Lindorff, of Counterpunch, have persistently drawn attention to U.S. war crimes committed in Afghanistan. Makers of the film “Rethinking Afghanistan” have steadily provided updates about the suffering endured by Afghan civilians. Here is a short list of atrocities that have occurred in the months since General McChrystal assumed his post in Afghanistan.

December 26th, 2009: U.S.-led forces, whether soldiers or “security contractors” (mercenaries) is still uncertain, raided a home in Kunar Province and pulled eight young men out of their beds, handcuffed them, and gunned them down execution-style. The Pentagon initially reported that the victims had been running a bomb factory, although distraught villagers were willing to swear that the victims, youngsters, aged 11-18, were just seven normal schoolboys and one shepherd boy. Following courageous reporting by Jerome Starkey, the U.S. military carried out its own investigation and Feb. 24 issued an apology, attesting the boys’ innocence.

Feb.12: U.S. and Afghan forces raided a home during a party and killed five people, including a local district attorney, a local police commander two pregnant mothers and a teenaged girl engaged to be married. Neither Commander Dawood, shot in the doorway of his home while pleading for calm waving his badge, nor the teenaged Gulalai, died immediately, but the gunmen refused to allow relatives to take them to the hospital. Instead, they forced them to wait for hours barefoot in the winter cold outside.

Despite crowds of witnesses on the scene, the NATO report insisted that the two pregnant women at the party had been found bound and gagged, murdered by the male victims in an honor killing. A March 16 U.N. report, following on further reporting by Starkey, exposed the deception, to meager American press attention.

Feb. 21: A three-car convoy of Afghans was traveling to the market in Kandahar with plans to proceed from there to a hospital in Kabul where some of the party could be taken for much-needed medical treatment. U.S. forces saw Afghans travelling together and launched an air-to-ground attack on the first car. Women in the second car immediately jumped out waving their scarves, trying desperately to communicate that they were civilians. The U.S. helicopter gunships continued firing on the now unshielded women. 21 people were killed and 13 were wounded.

There was media attention for this atrocity, and U.S. General Stanley McChrystal would issue a videotaped apology for his soldiers’ tragic mistake. Broad consensus among the press accepted this as a gracious gesture, with no consequences for the helicopter crew ever demanded or announced.

Whether having that gunship in the country was a mistake – or a crime – was never raised as a question.

And who would want it raised? Set amidst the horrors of an ongoing eight-year war, how many Americans think twice about these atrocities, hearing them on the news.

So I’m baffled to learn that in Germany, a western, relatively comfortable country, citizens raised a sustained protest when their leaders misled them regarding an atrocity that cost many dozens of civilian lives in Afghanistan.

The air strike was conducted by U.S. planes but called in by German forces. On Sept. 4, 2009, Taleban fighters in Kunduz province had hijacked two trucks filled with petrol, but then gotten stuck in a quagmire where the trucks had sank. Locals, realizing that the trucks carried valuable fuel, had arrived in large numbers to siphon it off, but when a German officer at the nearest NATO station learned that over 100 people had assembled in an area under his supervision, he decided they must be insurgents and a threat to Germans under his command. At his call, a U.S. fighter jet bombed the tankers, incinerating 142 people, dozens of them confirmable as civilians.

On Sept. 6, Germany’s Defense Minister at the time, Franz Josef Jung, held a press conference in which he defended the attack, playing down the presence of civilians. He wasn’t aware that video footage from a U.S. F15 fighter jet showed that most of the people present were unarmed civilians gathering to fill containers with fuel.

On Nov. 27, after a steady outcry on the part of the German public, the Defense Minister was withdrawn from his post, (he is now a Labor Minister), and two German military officials, one of them Germany’s top military commander Wolfgang Schneiderhan, were forced to resign.

I felt uneasy and sad when I realized that my first response to this story was a feeling of curiosity as to how the public of another country could manage to raise such a furor over deaths of people in faraway Afghanistan. How odd to have grown up wondering how anyone could ever have been an uninvolved bystander allowing Nazi atrocities to develop and to find myself, four decades later, puzzling over how German people or any country’s citizenship could exercise so much control over their governance.

Today, in the U.S., attacks on civilians are frequently discussed in terms of the “war for hearts and minds.”

Close to 10 months ago, Defense Secretary Robert Gates told reporters at a June 12 press conference in Brussels that General Stanley McChrystal “would work to minimize Afghan civilian casualties, a source of growing public anger within Afghanistan.”

"Every civilian casualty -- however caused -- is a defeat for us,” Gates continued, “and a setback for the Afghan government."

On March 23, McChrystal was interviewed by the Daily Telegraph. "Your security comes from the people," he said. "You don't need to be secured away from the people. You need to be secured by the people. So as you win their support, it's in their interests to secure you, …. This can mean patrolling without armored vehicles or even flak jackets. It means accepting greater short-term risk – and higher casualties – in the hope of winning a "battle of perceptions and perspectives" that will result in longer-term security."

We’re obliged as Americans to ask ourselves whether we will be guided by a message such as McChrystal's or by evidence. Americans have not been through thirty-one years of war, and we have managed to see very little of the consequences of decades of warmaking in Afghanistan.

According to a March 3 Save the Children report, “The world is ignoring the daily deaths of more than 850 Afghan children from treatable diseases like diarrhea and pneumonia, focusing on fighting the insurgency rather than providing humanitarian aid.” The report notes that a quarter of all children born in the country die before the age of five, while nearly 60 percent of children are malnourished and suffer physical or mental problems. The UN Human Development Index in 2009 says that Afghanistan is one of the poorest countries in the world, second only to Niger in sub-Saharan Africa.

The proposed U.S. defense budget will cost the U.S. public $2 billion per day. President Obama’s administration is seeking a $3 billion supplemental to fund wars in Iraq and Afghanistan.

Most U.S. people are aware of Taleban atrocities, and many may believe the U.S. troops are in Afghanistan to protect Afghan villagers from Taleban human rights abuses. At least the mainstream news media in Germany and the UK will air stories of atrocities. The U.S. people are disadvantaged inasmuch as the media and the Pentagon attempt to pacify us, winning our hearts and minds to bankroll ongoing warfare and troop escalation in Afghanistan. Yet it isn’t very difficult to pacify U.S. people. We’re easily distracted from the war, and when we do note that an atrocity has happened, we seem more likely to respond with a shrug of dismay than with a sustained protest.

At the Winter Soldier hearings, future presidential hopeful John Kerry movingly asked Congress how it could ask a soldier “To be the last man to die for a mistake,” while contemporary polls showed less prominent Americans far more willing to call the Vietnam war an evil – a crime – a sin – than “a mistake.” The purpose of that war, as of Obama’s favored war in Afghanistan, was to pacify dangerous populations – to make them peaceful, to win the battle of hearts and minds.

Afghan civilian deaths no longer occur at the rate seen in the war’s first few months, in which the civilian toll of our Sept.11 attacks, pretext for the war then as it is now, was so rapidly exceeded.

But every week we hear – if we are listening very carefully to the news, if we are still reading that final paragraph on page A16 – or if we are following the work of brave souls like Jerome Starkey - of tragic mistakes. We are used to tragic mistakes. Attacking a country militarily means planning for countless tragic mistakes.

Some of us still let ourselves believe that the war can do some good in Afghanistan, that our leaders’ motives for escalating the war, however dominated by strategic economic concerns and geopolitical rivalries, still in some small part include the interests of the Afghan people.

There are others who know where this war will lead and know that our leaders know, and have simply become too fatigued, too drained of frightened tears by this long decade of nightmare, to hold those leaders accountable anymore for moral choices.

It’s worthwhile to wonder, how did we become this pacified?

But far more important is our collective effort to approach the mirror, to stay in front of it, unflinching, and see the consequences of our mistaken acquiescence to the tragic mistakes of war, and then work, work hard, to correct our mistakes and nonviolently resist collaboration with war crimes.

Why Catholics should use preferred gender pronouns and names

With children's prayers nearby, bishops try to tackle immigration