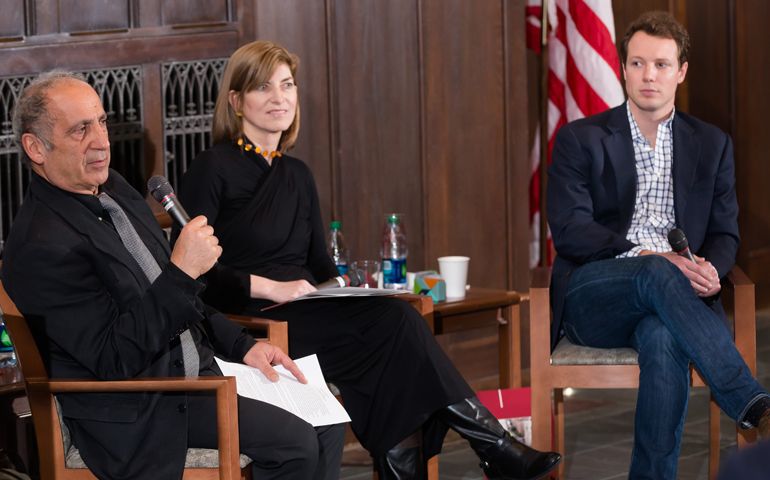 From left: David Elcott, a New York University professor, Rosanne Haggerty and Will Haughey at "The Business of Justice: New Horizons and Social Transformation" on Tuesday at Fordham University. (Fordham University/Leo Sorel)

New York — For social justice seekers of the 21st century, tactics used by the community organizers and philanthropists of years passed are passé. It takes an innovative approach to business, government and community to aid the most vulnerable populations and to bring real social change in today's world.

These were among the issues raised at "The Business of Justice: New Horizons and Social Transformation," a discussion presented Tuesday night by Fordham University's Center on Religion and Culture.

The center welcomed two panelists to share their experiences in the fight for social justice in their respective fields: Rosanne Haggerty, founder and director of Common Ground Community and CEO of Community Solutions, two nonprofits that fight homelessness in cities across the United States; and Will Haughey, co-founder of Tegu, a toy company based in Honduras that brings social justice innovation to the workplace.

For the two panelists, the fight for social change must address the large questions about the causes of poverty and inequality. "Why is it the vulnerable people fall through the cracks of our society?" Haggerty asked.

Haggerty first became involved in community organizing as a recent college graduate and volunteer at The Covenant House, a charity and shelter for homeless teens, in New York's Times Square.

At Covenant House, Haggerty realized the limits of care for the homeless. After 30 days there, she said, the homeless teens of Times Square more often than not returned to the street.

"We were accomplishing very little for these young people," Haggerty said.

Disillusioned, she turned to solving the larger problem: "What's it going to take to reduce homelessness in Times Square by two-thirds in three years?"

To answer this question, Haggerty launched Common Ground Community in 1990. At Common Ground, she was first able to implement the innovation that has become integral in her community organizing work.

An emphasis on data and an understanding of how to use government programs is a constant in Haggerty's career as an organizer.

The Times Square then attracted businesses to its commercial spaces, providing jobs to residents and saving the city of New York money. "We were able to provide people with a life for a fraction of the price," Haggerty said.

Now, on a national scale, Haggerty trains organizers in cities across the United States on how to use data and government cooperation to combat poverty.

"We use data from the Department of Health and Human Services to identify how many people are homeless in a community and how many housing units are available," Haggerty said.

Aside from the data-driven aspect, correctly identifying the most useful organizers in a community is vitally important, she said. "Who are the leaders? Who's getting stuff done? Who volunteers at the local school? We're looking for those people," Haggerty said.

Leaders in the private sector can have just as much influence on the lives of the poor as community leaders.

At Tegu, Haughey is driven by his Christian faith to responsibly treat the company's workers and the natural resources used to manufacture their wooden toys.

"My measure that I aspire to is the teaching and behavior of Jesus Christ," Haughey told the crowd at Fordham.

To combat Honduras' extreme poverty and unemployment rate, Haughey and the leaders of Tegu have made an effort to employ factory workers for a long period of time.

In Honduras, Haughey said, "There's no guarantee of work for 12 months, no emphasis or concern for that continuity," which adds to the country's high unemployment and poverty rate. "We provide work all year long; we're taking measures to do that."

Tegu also works with the nongovernmental organization Trees For The Future to replace trees and replenish the natural resources used in the manufacturing of their wooden toys. Through that work, Tegu has planted more than 250,000 trees, Haughey said.

Most importantly, Tegu and Haughey are concerned with the depth of their work. Haughey admits one toy company cannot single-handedly transform society in poverty-stricken Honduras.

"But," he says "we can have a transforming effect."

'Good trouble': What we see in Jesus' parable of the persistent widow

Will there be only white people there?