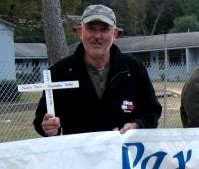 COLUMBUS, GA. -- Pax Christi USA's newly appointed National Council Treasurer Jack McHale doesn't mind getting kicked in the leg from under the table once in a while.

That's what happened to McHale one Saturday morning when he starting speaking frankly about the challenges facing Pax Christi as the organization tries to be more relevant in its role as the U.S. church's only major peace organization.

McHale, who was in town for the annual SOA Watch gathering Nov. 19 and 20 at the gates of Fort Benning, invited Pax Christi regional coordinators to a downtown Columbus coffeehouse to talk peace.

As McHale started to talk about strategies to raise Pax Christi's visibility and influence, he received his first kick from someone at the table who thought McHale should be more guarded in his comments in front of a reporter.

However, McHale, a 60-year-old father of four adult children, is an experienced fundraiser, a top-flight organizer and a person known for speaking his mind.

At the Nov. 14 gathering of the U.S. Conference of Catholic Bishops in Washington D.C., McHale donned black clothes (he's never been a priest, but he did attend seminary), got into the meeting (evading "specific security to keep us out") and pulled aside any bishop who would listen to him. McHale proudly told the dozen people sitting around the table about his one-on-one conversations with seven bishops (he got all their names).

"Most of them didn't say anything. They just listened. But it's a start," McHale said.

McHale said he has a better idea for 2012 -- get the bishops to support a "Pax Christi room" at their meeting.

"Next year we're going to try and have a presence within the Catholic Conference of Bishops. We shouldn't be on the outside looking in. We should be right on the inside working with them," McHale said in an interview with NCR. "Maybe bishops can come in and learn from us."

McHale tells plenty of stories about the lawn signs in favor of peace he often erects in the yard of his spick-and-span Virginia home in the suburbs of Washington, D.C. His mostly Republican neighbors include some high-ranking employees at the Pentagon and State Department. A leader in in youth sports in his community, McHale and his wife, Karen, rarely lock their doors, and they almost always have a house full of kids, grandkids and friends.

One of McHale's ideas for Pax Christi is for more outreach to JustFaith groups as a way to recruit and get into parishes.

Also, Pax Christi members and local groups need to "be on the same page nationally," McHale says, so the group can speak with one clear voice. "We've also got to do more things with youth."

McHale said he was inspired by Andrew Bacevich, professor of international relations at Boston University and author of "The Limits of Power: The End of American Exceptionalism," when Bacevich was the keynote speaker at a recent meeting of Pax Christi Metro D.C.-Baltimore.

"He said, 'Christianity's a failure,' and if you were to measure it in terms of where the churches are today, you might have reason to even believe that," McHale said.

Forget the notion of American exceptionalism: McHale wants Catholics to think of themselves as faithful Catholics rather than as loyal patriots.

"I think the key for us is to get into the parishes," McHale said. "We're the only organization within the church that's dedicated to peacemaking and anti-war. That's it. If not us, then whom? Peacemaking's not an option to be Christian. It's part of what we're called to be."

It looks like those under-the-table kicks will have to be a bit harder to keep McHale quiet.

We must all stand up to injustice to achieve equality