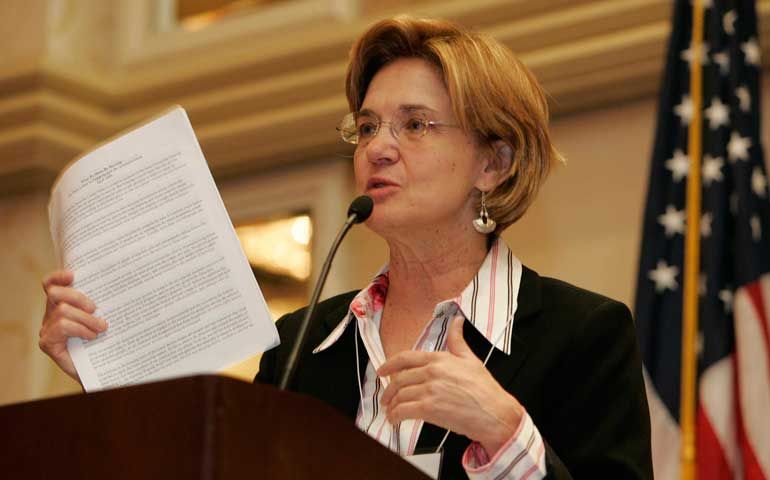 Washington — Doomsday for Democrats has arrived. Republicans officially took over Congress this month, and progressives are kicking themselves for failing to convince voters of their vision during the midterm elections.

What now? What will this mean for those who defend the least among us? How are social justice folks sizing up the new Congress? What does Republican control of the country's purse strings mean for their game plan?

"The important thing to say about the federal budget from the social justice perspective is that budgets reflect values," said Sheila Crowley, president and CEO of the National Low Income Housing Coalition. "They reflect the way it is that a society decides to treat one another. They reflect our national priorities."

"Elections matter in terms of who's in charge and what agenda there will be for the various committees," she said. "But you know, it was already tough for low-income people. On issues relating to poverty, the federal government is in a very ungiving place. But the budget for some time has not had a priority on serving low-income people."

Crowley sees continued evidence of this in the latest omnibus spending bill, which was passed by Congress and signed by President Barack Obama in December. The $1.1 trillion bill funds most government agencies through September 2015.

"There are a lot of benefits that go to higher-income people, or to corporations," she said. "I guess you would say it benefits politicians, in that it lets rich people give them more money, by upping the minimum campaign contributions. And then the deregulation, the rescinding of some of the rules from the Dodd-Frank financial regulation law, of course that makes it easier for Wall Street to make more money."

Asked about her worries moving forward, Crowley brought up the specter of sequestration, or automatic budget cuts authorized by the Budget Control Act of 2011. The White House on its website says the cuts "threaten hundreds of thousands of jobs, and cut vital services for children, seniors, people with mental illness and our men and women in uniform."

In December 2013, Sens. Patty Murray, D-Wash., and Paul Ryan, R-Wis., struck a deal to mitigate the ill effects of sequestration, but that deal expires this year, Crowley said. "The sequester will be back unless there is a significant ability for the new Congress to change that."

Only this time it may not be "across the board," she said. "It could all come out of the non-defense area."

Such dismal prospects are all the more reason to stay off the Hill entirely, says Philip Tegeler, president and executive director of the Poverty & Race Research Action Council.

"When there was a potential for progressive reform," it was different, he said. "But when the House changed parties," going Republican in 2010, "it became clear to us that there was not a real possibility of new progressive legislation coming out of Congress."

Tegeler switched his focus to the executive branch and the work of federal agencies, and maintains that focus today, unfazed by the events of the midterm.

"There's an enormous amount of discretion the executive branch has to make changes that affect millions of people," he said. "We're trying to push certain ideas and monitor what's happening, particularly at the Department of Housing and Urban Development and the Department of Education, two agencies that really affect the patterns of segregation in this country."

"We see segregation as such a driver of income inequality and disparities and outcomes across a whole range: education, employment, criminal justice," Tegeler said. "Segregation by race and class has been a very effective system for reproducing inequality in our country."

But at HUD and the Department of Education, Tegeler sees "a lot of room for reform." This is true of many federal agencies, he said.

Crowley has seen it firsthand with the Federal Housing Finance Agency. In mid-December, a fund for developers targeting low-income populations, called the National Housing Trust Fund, got a kick-start when Housing Finance Agency Director Mel Watt instructed Fannie Mae and Freddie Mac to finally start paying into it. The National Low Income Housing Coalition has been working toward the effort since 2000.

"We will be seeing money, new money, a dedicated source of revenue not in the appropriations process that will go to housing for the very poorest people," Crowley said.

Of course, some are upset with the decision, said Crowley: "all Republicans," led by House Financial Services Committee Chairman Jeb Hensarling of Texas. Hensarling called the decision to fund the trust a "grave mistake that harms hardworking taxpayers and violates both the letter and spirit of the law."

"[Republicans] are threatening to do something about it," Crowley said. "I don't think that they can reverse it, but it will still be something that we have to defend against."

"All told, over the last four years of budget fighting, the cuts to programs for low-income people have come to just 2 percent of what House Republicans have been calling for," he claimed. Amazingly, he said, programs intended to cut poverty in other parts of the world have even seen increases.

The Circle of Protection, a coalition of 65 heads of denominations, relief and development agencies, and other Christian organizations formed in 2011 to fight budget cuts to poverty programs. The coalition, which includes the U.S. Conference of Catholic Bishops, "has been an outrageous success," Beckmann said.

"Pointing to 2015, what's clear to me is that we have to play both defense and offense," he said. "I think the new Congress dominated by Republicans in both the House and the Senate will pass a draconian budget resolution; they will push for even deeper cuts for programs that help poor people."

But Beckmann sees some hope "coming from presidential politics."

"Republicans who want to become president can't win the White House if they are not seen as heralds of opportunity for the bottom 47 percent," he said.

Obama cites the history of Christian terrorism (and creates an uproar)