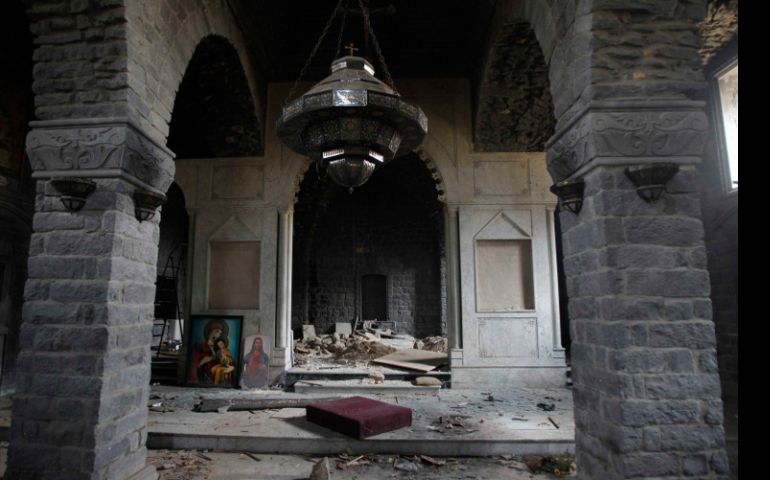 Paintings of Mary and Christ are seen in the damaged Um al-Zenar church in Homs, Syria, May 9. (CNS/Reuters/Khaled al-Hariri)

For Syria’s three-year armed conflict to come to an end, all foreign fighters and the external powers that support them must first leave the country, said Mother Agnes Mariam, a Carmelite nun in Syria, during a public lecture April 29 at Saint Mary’s College of California. That departure, she said, would allow the Syrian people the safety to resolve their political differences through non-violent negotiations.

She has been working vigorously with the Mussalaha Reconciliation Initiative, a Syrian community-based non-violent collective, to achieve such a resolution. Her work has included brokering agreements between members of Syrian rebel forces and the government of President Bashar al-Assad to deliver food to beleaguered citizens and to arrange for the evacuation of women and children from conflict zones.

Recently she has convinced some fighters to put down their arms in exchange for amnesty. Some of these men are now working with Mussalaha, which she helped start in Homs in January 2012.

Mother Agnes Mariam, superior of the Monastery of St. James the Mutilated in Homs, is now on an international lecture tour to call attention to what she sees as media misrepresentations about the Syrian war that has left 150,000 dead and 9 million displaced.

During her lecture at St. Mary’s College, she said that the initial legitimate expression of opposition to policies and practices of the Assad government has been hijacked by extreme Islamists who are supported by outside governments and are trying to impose their views on all of Syria.

Her appearance at the Christian Brothers’ college, nestled in the hills of Moraga east of Oakland, was not without controversy. Some in attendance interrupted her with accusations that she is too partial to the Assad government.  “I am a nun, not a geopoliticist or a diplomat,” she said. “I do not take sides. But I have experience and a conscience.”

Michael McAlpin, communications director at St. Mary’s, told NCR that a half-dozen people called with objections to Mother Agnes Mariam’s presentation. “While we were respectful of the perspectives of those individuals, we welcome speakers to stimulate insightful and provocative conversation on campus,” he said.

She spoke passionately against the terror currently wielded by Islamic fundamentalists, known as “takfiris,”who are trying to impose their interpretation of Shariah law through extreme violence including kidnappings and beheadings. “We are back to the barbarian era,” she said.

In April, Jesuit Fr. Frans van der Lugt was assassinated in Homs. The 75-year-old priest had lived in Syria for nearly 50 years and had refused to leave this war-torn city, instead staying to help the poor and homeless. He was beaten by unidentified armed men and killed with two bullets to the head, according to the Jesuits' Middle East province. Van der Lugt, a psychotherapist, had worked in Syria since 1966 and had been offering shelter in his monastery to Muslims and Christians left homeless by the war.

In December, Islamist rebels abducted 12 Greek Orthodox nuns from Syria’s ancient town of Maaloula, where Aramaic, the language of Jesus, is still spoken. They were released on March 9.

The takfiri movements, which include Al-Qaeda and ISIS (Islamic State of Iraq and al-Sham), are responsible for the vast majority of rebel violence, said Mother Agnes Mariam. The 61-year-old native of Lebanon insisted that most of these fighters are receiving armed support from other countries, especially the Gulf states and Western nations.

Her conviction echoes that of Syrian Archbishop Jacques Behnan Hindo who, in a videotaped interview in late February on the Orantes website for Syrian Christians, said, “Unfortunately, the U.S., France, and England do nothing except add poison to things by aiding those who want to declare an Islamic state.” But, he added, peace is “always possible.” The first condition is for the “terrorists to leave.” When they are gone, he believes, “We Syrians can come to an agreement.”

That sentiment pervades much of the country, said Rick Sterling, an American peace activist who visited Damascus, Latakia and Homs last month with Mairead Maguire, Nobel Peace laureate from Ireland, as part of an 18-person delegation. He told NCR that the delegation found a pervasive sentiment among Syrian religious leaders and citizens that many of the fighters are “stooges of foreign powers trying to destroy Syria.” Some of the fighters joined as a way to express their opposition to Assad, he said, but many are mercenaries eager to make money. In the process they become “indoctrinated into the extremes of Islam,” he said.

Maguire, in a published report on the trip, said the group met with Melkite Greek Catholic Patriarch Gregorios Laham and Grand Mufti Ahmad Badr al-Din Hassoun. They are “sure that if other countries will stop the flow of arms, fighters and other interference in Syria, the Syrian people will be able to reach an understanding amongst themselves and rebuild Syria together,” she wrote

Meanwhile, the fighting continues with attacks and counterattacks in what Mother Agnes Mariam termed the “engineering of chaos.” It has left Syria with more than 40 percent of its pre-conflict population as internal or external refugees.

UN High Commissioner for Refugees Antonio Guterres has called the situation “unconscionable. … No effort should be spared to forge peace.”

Last week, rebels in Homs agreed to a ceasefire and began leaving the besieged city. For her work to end the violence throughout, Mother Agnes Mariam was recently nominated for the Nobel Peace Prize.

Mussalaha’s 10 points towards reconciliation and peace

Is peace possible in Syria? Is Assad part of it?

Controversial nun speaks out on war in Syria

Thoughts on Francis as 'Person of the Year'