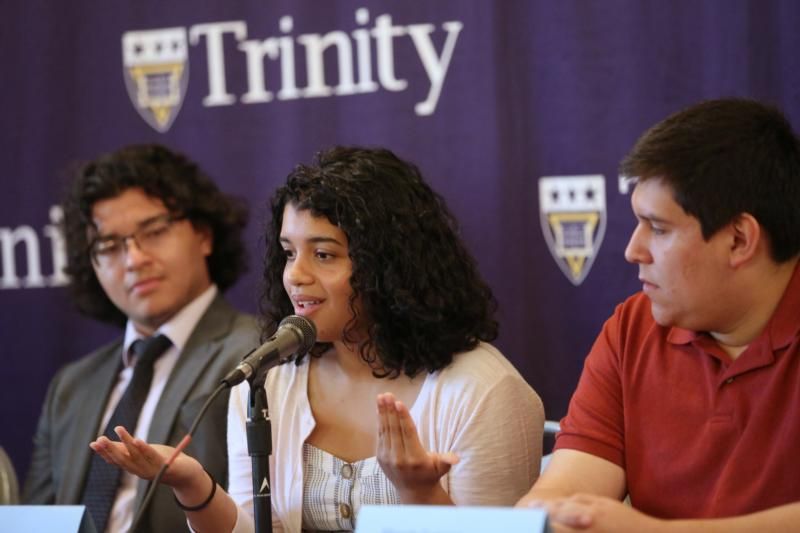 Daniela Zelaya, a student at Trinity Washington University, gestures as she speaks during a Sept. 24, 2019, panel discussion at the university titled "Undocumented and Unafraid: Student Activism in the Era of Deportation." Also pictured are Jose Gutierrez, a student at The Catholic University of America in Washington, and Mizraim Guerrero, a student at Georgetown University. (CNS photo/Bob Roller)

Washington — Undocumented student activists want to set the record straight. Tropes about undocumented immigrants, even positive ones, can be detrimental to the undocumented community.

At a Sept. 24 panel discussion at Trinity Washington University, four student panelists from Washington's three Catholic universities shared their own stories and thoughts on what they believe is often overlooked in mainstream narratives about undocumented immigrants. By giving voice to the hardships, diversity and uncertainty of the undocumented immigrant experience, all four expressed their hope to inspire other undocumented people to also speak out on behalf of their community.

The event, titled "Undocumented and Unafraid: Student Activism in the Era of Deportation," was co-sponsored by Trinity Washington University and Faith in Public Life, a Washington-based advocacy organization, and was moderated by John Gehring, a contributing writer to NCR.

"I think there's this huge narrative that migration is beautiful and it's not," said Arlin Tellez, a student at Trinity. "The trauma that you have to go through is not beautiful."

Tellez, who immigrated to the United States from Mexico as a young girl, recounted the trauma she  suffered as a result of being an undocumented immigrant, from the intense fear that either she or her family members could be deported to missing her father's death after a battle with brain cancer in 2008.

Tellez also drew from her experience working as a researcher on federal prosecution cases for illegal entry and reentry, saying that she knew migrants who were assaulted, raped and placed in solitary confinement in detention centers in Texas.

"The 'migration is beautiful' [narrative] cuts so many people out of what it is," said Tellez.

Another popular narrative the students argued is incomplete is that of "dreamers" – those who receive protection under Deferred Action for Childhood Arrivals to attend college in the U.S.

Mizraim Guerrero, a student at Georgetown, said he thinks elevating dreamers as the "model undocumented person" can be detrimental to other immigrants who don't fit that mold and feeds into the criminalization of communities of color. He pointed out that there are roughly 11 million undocumented immigrants living in the U.S., but only 800,000 are beneficiaries of DACA.

"To only bring dignity and to only bring the voices of high achieving undocumented folks, dreamers, really does a disservice to the broader undocumented community that … need to be treated as human beings at the end of the day," he said.

Daniela Zelaya, a student at Trinity, discussed the anxiety she feels about her uncertain future as a result of her undocumented status. She said the possibility of having to take care of her younger siblings, one of whom has Down Syndrome, should her parents be deported is "really scary."

Similarly, Jose Gutierrez, a student at Catholic University, raised the issue of undocumented people's mental health as an important concern.

"When I realized that my peers were taking all these opportunities, I felt hopeless. I felt like, what is the point? Why should I continue to motivate myself and keep driving through these obstacles if one day they could just disappear?" Gutierrez said.

Despite the difficulties they face, all four panelists said they have hope.

Tellez said her hope is rooted in that her "people have always been here and our people will continue to be here." Guerrero, who described himself as shy, said advocating for undocumented immigrants' rights has helped him find his own voice. Zelaya aspires to be the first Latina secretary of education in the U.S. to help others have the access to education she had growing up in Silver Spring, Maryland. And Gutierrez, who said he is agnostic, said that although he doesn't have faith in God, he has faith that others will hear his story and be inspired.

[Jesse Remedios is a Bertelsen Editorial Intern with the National Catholic Reporter.]