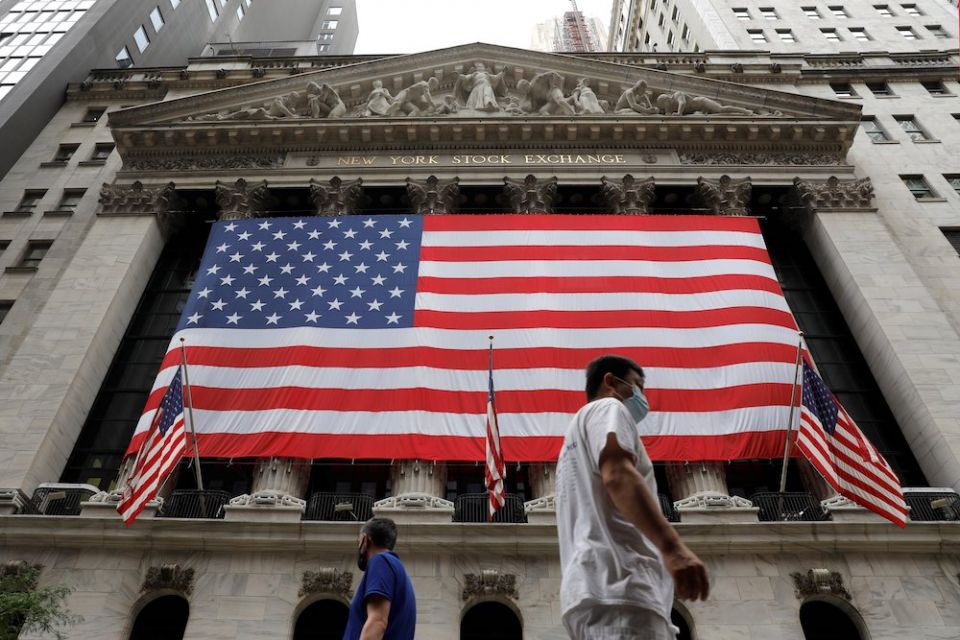 People in New York City walk by American flags Aug. 9. On Aug. 11, the Senate passed a $3.5 trillion spending package that includes immigration reform provisions, including creating a path to citizenship for 10 million people in the U.S. illegally. (CNS/Reuters/Andrew Kelly)

Washington — The U.S. bishops' migration chair said Aug. 12 that the Catholic leaders were pleased the $3.5 trillion spending plan passed by the Senate a day earlier would provide "lawful permanent status to qualified immigrants."

"While Catholic social teaching is implicated by many components of the budget resolution, we are pleased that the resolution sets up an opportunity for many undocumented persons to receive legal status," said Auxiliary Bishop Mario Dorsonville of Washington and chairman of the U.S. Conference on Catholic Bishops' Committee on Migration.

"Undocumented people living in the United States are frequently at risk of mistreatment and exploitation because they lack legal status," he said. "Deporting millions of longtime residents would be unworkable and only serve to fragment families and harm local communities, especially when so many have U.S.-citizen children and spouses, own homes and businesses, and serve as essential workers."

"Integration into society is the moral solution for these persons," Dorsonville said, noting that Pope Francis and his predecessors as well as the U.S. bishops have long supported this view.

Immigration is included in a host of issues addressed in the Senate Democrats' $3.5 trillion bill, which is a blueprint for government spending. It was approved in a party-line vote of 50-49 at 4 a.m. Eastern time Aug. 11.

The spending bill is technically called a Senate concurrent resolution — S. Con. Res. 14 — and it sets the federal budget for fiscal year 2022 and appropriate budgetary levels for federal departments and agencies for fiscal years 2023 through 2031.

News reports said the Democrats "plan to push the package" through the House and Senate by using "budget reconciliation." The process, created under the Congressional Budget Act of 1974, allows a simple majority to pass certain types of legislation.

According to The Hill, a political news website, the package instructs lawmakers "to chart a pathway to citizenship for millions of people while investing in border security," allocating about $107 billion for the Senate Judiciary Committee to spend on each.

"The package does not specify how many people or which groups would be covered by the legislation, instead directing the committee to provide 'lawful permanent status for qualified immigrants,'" it said. "A summary of the bill also states it will provide green cards 'to millions of immigrant workers and families.'"

"Ultimately, a more comprehensive reform of our immigration system is needed, but ensuring access to permanent legal status and citizenship for the undocumented is an essential step," Dorsonville said.

"We call on the House to adopt the legalization instructions in S. Con. Res. 14," he said, adding Congress must support provisions "that would, at a minimum, legalize with a path to citizenship Dreamers, Temporary Protected Status and Deferred Enforced Departure holders, undocumented agricultural workers, and other undocumented essential workers."

"Dreamers" are young people who were brought illegally into the United States by their parents when they were children. Those who are eligible for the program are covered by Deferred Action for Childhood Arrivals, or DACA, which was created by President Barack Obama in an executive order in 2012.

The program allows qualifying young people to go to college, work, get health insurance, a driver's license and not face deportation.

If the $3.5 trillion budget plan passes, around 10 million people would be eligible for a path to citizenship. That is just under the 11 million President Joe Biden proposed citizenship for in a sweeping immigration reform bill he sent to Congress Jan. 20, the day he was inaugurated: the U.S. Citizenship Act of 2021.

His proposal calls for creating an eight-year path to citizenship for immigrants in the U.S. illegally, beefing up border security with new screening technologies and sending aid to Central America.

On July 6, Republican Sens. John Cornyn of Texas and Thom Tillis of North Carolina proposed legislation to offer a path to citizenship for current "active participants" in DACA, who currently number about 700,000.

A federal judge ruled July 16 to end the program, a move that immigrant advocates said should prompt Congress and Biden to speed up legislation to these young people.

Currently, a Senate committee is considering the American Dream and Promise Act of 2021. The House passed its version of the measure in March, along with the Farm Workforce Modernization Act, which provides a path to legal status for farmworkers.