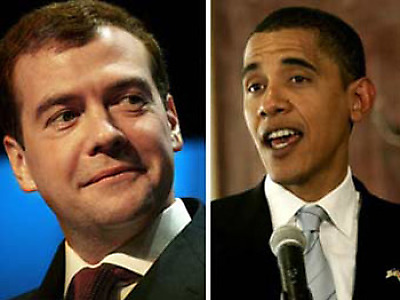 U.S. President Barack Obama and Russian President Dmitry Medvedev, after holding their first face-to-face meeting in London ahead of the G20 summit, promised April 1 a new era in relations between the United States and Russia and made a milestone bid to agree far-reaching nuclear arms cuts.

"Over the last several years, the relationship between our two countries has been allowed to drift," Obama told reporters after his meeting with Medvedev. "What I believe we've begun today is a very constructive dialogue that will allow us to work on issues of mutual interest."

Obama stated that the two countries have started a constructive dialogue on issues that are related with the deployment of the anti-missile system, the tackle of terrorism and financial stability.

They agreed to work overtime to negotiate a replacement for the seminal 1991 Strategic Arms Reduction Treaty, or START, which expires at year's end.

The following is a transcript of the remarks delivered by Obama and Medvedev:

PRESIDENT OBAMA: Let me just make a brief comment. I am very grateful to President Medvedev for taking the time to visit with me today. I'm particularly gratified because prior to the meeting our respective teams had worked together and had developed a series of approaches to areas of common interest that I think present great promise.

So I am very encouraged by the leadership of the President. I'm very grateful that he has taken the time to visit. I am especially excited about the fact that the President extended an invitation for me to visit Moscow to build on some of the areas that we discussed on today. And I have agreed to visit Moscow in July, which we both agreed was a better time than January to visit.

And my hope is that given the constructive conversations that we've had today, the joint statements that we will be issuing both on reductions of nuclear arsenals, as well as a range of other areas of interest, that what we're seeing today is the beginning of new progress in the U.S.-Russian relations. And I think that President Medvedev's leadership is -- has been critical in allowing that progress to take place.

So thank you very much.

I can only agree that the relations between our countries have been adrift over the past years. As President Obama has said, they were drifting, and drifting in some wrong directions. They were degrading, to some extent.

That is why we believe that since such a situation was not to the benefit of the United States or Russia Federation, to say nothing about the global situation, we believe that the time has come to reset our relations, as it was said, and to open a new page in progression in the development of our common situation.

Indeed, it was said that we are prepared to cooperate further in such areas as the nonproliferation of WMDs limitation of strategic weapons, countering terrorism, and improving economic and financial situation and the overall economic situation in the world. It is important to note that there are many points on which we can work. And indeed there are far more points in which we can -- where we can come closer, where we can work, rather than those points on which we have differences. Thus, by bringing our positions closer we can attain significant progress and, much more importantly, further our achievements.

We will be very glad to host President Obama, to greet him in Moscow in July. Indeed, July is the warmest time in Russia and in Moscow, and I believe that will be exactly the feature of the talks and relations we are going to enjoy during that period in Moscow. And of course we have set out certain objectives and certain goals and tasks we need to work through in order to get better prepared for this meeting. And indeed I am convinced that is a good opportunity for this interaction.

Well, indeed, so we are convinced that we'll continue successfully our contacts, in particular today, where we were not only discussing international issues or bilateral items of interaction; we were also discussing education, which probably not everybody -- where we have come to an understanding that we're reading the same textbooks while in these subjects. And this will set us further for interaction.

After this meeting, I am far more optimistic about the successful development of our relations, and would like to thank President Obama for this opportunity.

'No more war': Pope continues his teaching on Gospel nonviolence

Judge blocks deportation of Chaldeans and other Iraqis