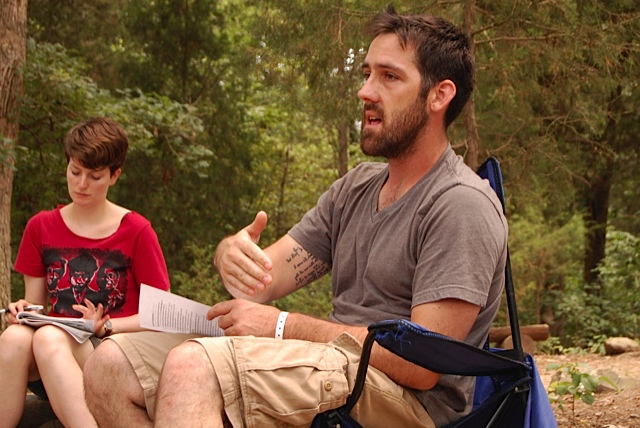 SILK HOPE, N.C. -- A Catholic priest told a family their disabled son was too noisy to bring to Mass. Sarah Cunningham lives a double life as a progressive Christian writer and speaker who must keep her true self a partial secret from her Southern Baptist fundamentalist pastor father. Iraqi war veteran Logan Mehl-Laituri isn't entirely sure what the consequences might be to his psyche from a 14-month tour in a war he now opposes. Gareth Higgins has faced depression while working to bring the Good News of God's love to people searching for holiness.

These stories and hundreds more were part of the diverse experiences of those who gave testimony at the second annual Wild Goose Festival, a four-day gathering of more than 2,000 Christians at Shakori Hills Farm near Chapel Hill. Perhaps the underlying theme of the June 21-24 gathering was lamentation. Wild Goose offered forlorn Christians a safe place to grieve out loud. And almost everyone who roamed the grassy hillsides for tent meetings or to sit on stumps and rocks found a compassionate listener, got a hug from a stranger, found a space to pray and almost always met another person with a similar story of struggle.

Higgins, the festival's co-founder, acted like just another festival-goer, addressing scores of people by name and waiting in line for food, like most of the speakers and musicians (many of whom agreed to appear at Wild Goose for free).

While sitting on a panel celebrating the life of the late theologian Walter Wink, Higgins spoke of a time he was with Wink while experiencing "a nasty bout of depression ... when the negative voice and the shadow overwhelms the light." Higgins said Wink immediately sought to relieve his friend's suffering.

"He laid hands on my shoulders, naming God as the healer of all of our wounds," Higgins said, "He declared himself, 'Be healed.' "

Joan Novak and Rosemary W. Simich, members of Holy Infant Catholic Church in Durham, N.C., said they decided "The Spiritual Woodstock" was a good way to describe Wild Goose, adding that the festival was a good complement to their Catholicism. They said they were excited to hear peace and social justice messages from speakers such as Jesuit Fr. John Dear (who writes a weekly column for NCR), Jim Wallis of Sojourners and civil rights leader Vincent Harding.

"The way I practice my Catholic faith is through the spirituality of Jesus, and that's what's here," said Simich, who was also at the 2011 festival. "We're talking about being one and creating the kingdom here."

Novak, attending her first festival, said she is displeased at the larger church for criticizing Catholic sisters for being too liberal and for emphasizing an anti-abortion message to the exclusion of other social justice issues. Locally, she said she did not approve of her bishop's support for an amendment to the state constitution, passed in May, that bans gay marriage.

"A lot more could be done, especially from the diocesan office," Novak said. "The social justice side needs more awareness."

Higgins, who moved to the United States from his native Northern Ireland, said the Wild Goose is a Celtic metaphor for the Holy Spirit.

"We are followers of Jesus creating a festival of justice, spirituality, music and the arts," Higgins wrote in promotional material for the festival. "In adopting the image of the Wild Goose we recognize that in the current climate of religious, social and political cynicism, embracing the creative and open nature of our faith is perhaps our greatest asset for re-building and strengthening our relationships with each other, with our enemies, with our stories, our texts, and the earth. In that spirit, in a festive setting, and in the context of meaningful, respectful, and sustained relationships."

Higgins is offering a second festival Aug. 31-Sept. 2 at the Benton County Fairgrounds, about 90 miles outside of Portland, Ore. An early bird price of $99 is being offered at the festival's website. "Our hope is this location will make Wild Goose more accessible and affordable for people living in the western half of the continent who might not be able to make the trek to North Carolina," Higgins wrote in promotional material. Among the featured presenters at Wild Goose West is Fr. Richard Rohr of the Center for Action and Contemplation.

Volunteers say in Peace Corps they learned about universality of church

A call for justice on January 21