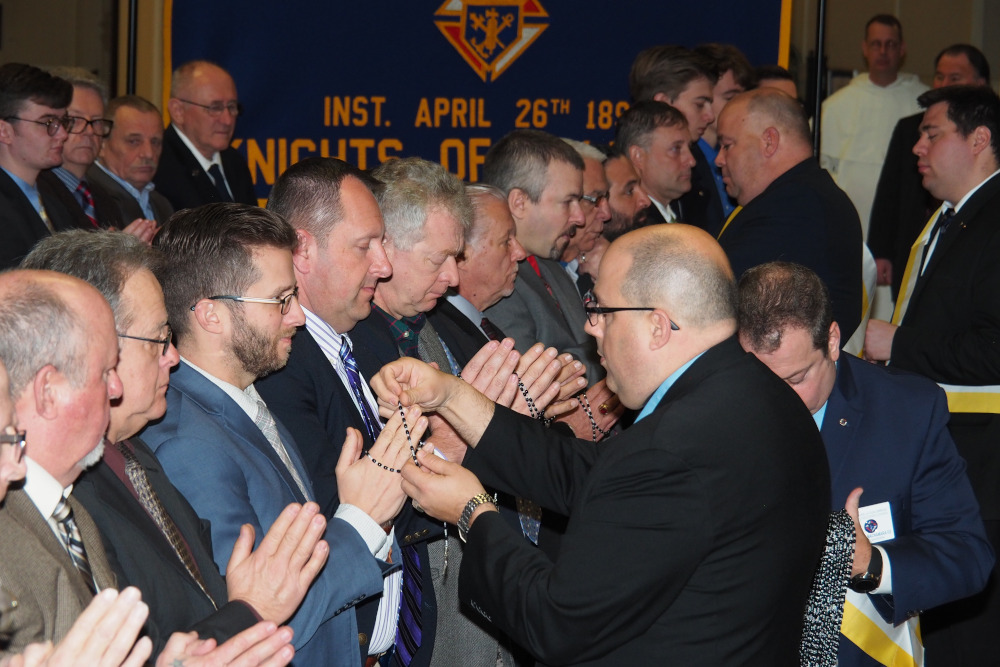 After 142 years, the Knights of Columbus is pulling down a veil of secrecy that has surrounded its initiation ceremonies in an effort to better showcase the order's core principles and its drive to help Catholic men become disciples.

Since its founding in 1882, the initiation ceremonies for the first three degrees of Knights membership — focused on the principles of charity, unity and fraternity — have been separate and open to members only. The fourth degree, dedicated to the principal of patriotism, was added later and this initiation also is secret and for members only.

But starting this year, the Knights have adopted a new ceremony. Called the Exemplification of Charity, Unity and Fraternity, it combines the initiation for the first three degrees into a single ceremony that will be open to family, friends and fellow parishioners.

"There is nothing we do that is secret or needs to be secret," Supreme Knight Carl Anderson told the Tennessee Register, newspaper of the Diocese of Nashville. "We decided this is a way to let other parishioners know, family members know, what the Knights of Columbus is all about. We think that's a good thing."

The Knights of Columbus is a fraternal organization of Catholic men that was founded by Fr. Michael McGivney, a young priest serving at St. Mary Church in New Haven, Connecticut. McGivney is a candidate for sainthood and has the title "Venerable."

Today, the order has more than 2 million members worldwide who are involved in charitable and service works.

Although membership as a whole is growing, not all areas are showing increases, Anderson said.

"I think the Catholic Church is growing more quickly in some areas than in other areas. Those trends affect us as well," he said. "When you see dioceses with parishes closing, that has to affect all the Catholic organizations in those dioceses."

At the Knights' Supreme Convention last summer, a resolution from the Illinois delegation calling for combining the first-, second- and third-degree ceremonies into one and removing the condition of secrecy was approved. Anderson directed a review of the ceremonies "with an eye toward staying true to our roots while at the same time presenting our principles of charity, unity and fraternity in a more clear and convincing way."

Anderson unveiled the new ceremony in November at the midyear meeting for the order's state deputies, who are the highest official in each jurisdiction. He said the ceremony "stays true to our traditions while addressing the needs of our times."

The fourth-degree ceremony will remain unchanged and will continue to be open to members only.

"Secrecy has to be understood in the context of the 19th century," Anderson said. "There was incredible bigotry against Catholics," with the anti-Catholic No Nothings in control politically in New England at the time, and the Ku Klux Klan later became a powerful political force across the country, he said.

"There was some appeal to secrecy."

Also at the time, the idea of progressing through the degrees as a journey toward Knighthood was popular.

But today, those features have proved to be an impediment to men joining, particularly young men, Anderson said.

By opening the ceremony to the public, "families and friends can see what we're all about and hopefully decide I or my brother or my husband should join," Anderson said.

The new degree ceremony pulls from the three previous ceremonies to pass along the organization's history and the importance of the principles rooted in the organization.

A ceremony that focuses on the three principles enhances the Knights involvement in the church's work of evangelization, Anderson explained.

"I think its central," he said. The order's principles "are really at the core of Catholic life, and (the new ceremony) makes it clear we have a responsibility and the responsibility extends into the whole person, the spiritual dimension, the fraternal dimension, and the financial dimension."

The script for the new degree calls for the ceremony to be conducted in a church or similarly appropriate location, with a priest or deacon participating. The expectation is that the new ceremony can be held after a Mass when the congregation can be invited to stay and watch.

"It's an exciting development for the Knights of Columbus," said Michael McCusker, the state deputy of Tennessee. "How many times do we go home from degrees with our hearts on fire and we had a desperate need to share it with our families, but we couldn't? To me that's akin to putting your light under a bushel."

"What I also like is it removes the struggle of getting a man to go through all three separate degrees," said McCusker, a member of Council 9317 at St. Francis of Assisi Church in Cordova, in suburban Memphis, Tennessee. "I like that they go, they and their families see what they're involved in, and the minute they leave, they're full members of the Knights of Columbus."

Fifty-two candidates from Connecticut councils participated in the new ceremony. About 200 people attended, including Anderson.

"They had a very large turnout and it was very well received," Anderson said. "That's been our experience across the country."