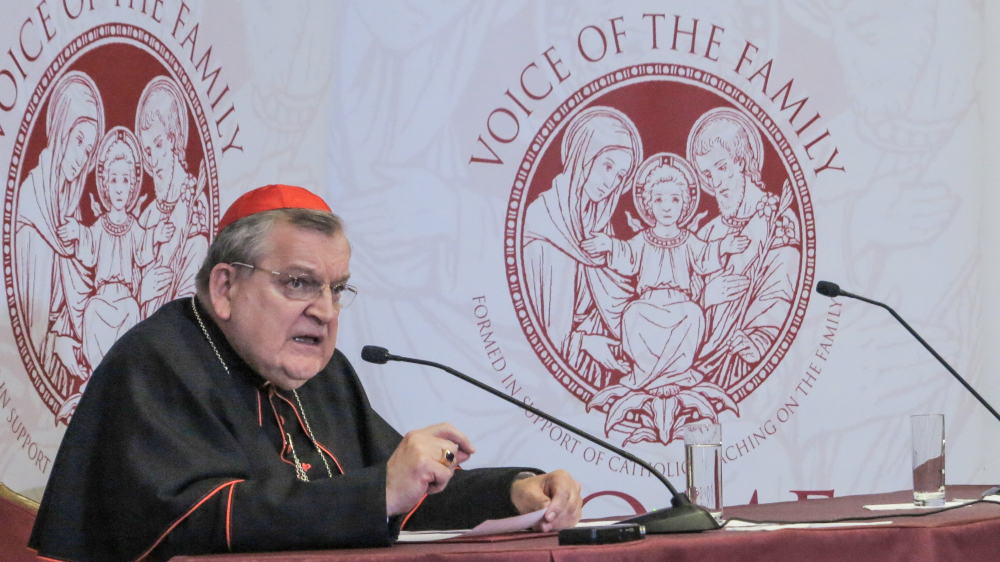 Cardinal Raymond Burke speaks at a pro-life and pro-family conference in Rome May 17, 2019. The cardinal said limiting Muslim immigration is responsible and patriotic. (CNS/Robert Duncan)

Limiting the number of Muslims allowed to immigrate to traditionally Christian nations would be a prudent decision on the part of politicians, said U.S. Cardinal Raymond Burke.

During a pro-life and pro-family conference in Rome May 17, the day before Italy's March for Life, Burke outlined his views on immigration.

"To resist large-scale Muslim immigration in my judgment is to be responsible," Burke said, responding to a written question.

Islam "believes itself to be destined to rule the world," he said. "You don't have to be a rocket scientist to see what has happened in Europe," the cardinal said, citing the large Muslim immigrant populations in France, Germany and Italy.

Burke's comments are the latest addition to a debate among Catholics regarding the application of Gospel precepts to the large numbers of migrants arriving in Western nations from Africa and the Middle East.

In early May, Cardinal Konrad Krajewski, the pope's almoner, told a reporter that the Vatican would refuse a papal blessing to Matteo Salvini, Italy's deputy prime minister, who is known for his restrictive immigration policies.

Burke said that the while the church must be generous to "individuals that are not able to find a way of living in their own country," this is not the case for many Muslim migrants, "who are opportunists."

The cardinal mentioned the book "No Go Zones: How Sharia Law is Coming to a Neighborhood Near You," written by former Breitbart News reporter Raheem Kassam, as evidence that Muslim immigration is having an effect even in the United States.

Pope Francis has made a generous attitude toward migrants a cornerstone of his pontificate, underlining the Christian duty to "welcome the stranger" over political or demographic considerations, although he repeatedly has added that government leaders have a responsibility to assess how many migrants their countries truly can integrate. Such an assessment should include the financial costs of helping immigrants learn the local language and customs, the pope has said.

Answering the written question from a conference participant, Burke said Christian nations' abandonment of traditional moral norms has been a cause of Europe's Muslim influx.

Another reason for the demographic shift, the cardinal said, is that "Christians are not reproducing themselves," referring to the widespread use of contraceptives.

In this context, Catholics have a duty to instruct migrants on "what is bankrupt in the culture" into which they are received. To the extent possible, Catholics should even to try to work with them "to recover what is true culture," which includes a recognition of the dignity of life, respect for sexual morality and proper worship of God, the cardinal said.

In view of these considerations, limiting "large-scale Muslim immigration is in fact, as far as I'm concerned, a responsible exercise of one's patriotism," Burke said.

In April, Burke contributed a foreword to a book titled, "Love for the Papacy and Filial Resistance to the Pope in the History of the Church," by Roberto de Mattei, an Italian historian.

"At a time of profoundest spiritual and moral crisis, the Catholic Church needs more than ever before to recall her sacred tradition, unbroken from the time of the apostles," the cardinal wrote.

Burke, 70, is perhaps best known as one of four cardinals who, opposed to the possibility that some divorced and civilly remarried couples might eventually be readmitted to the sacraments, wrote a series of "dubia" or doubts about Pope Francis' 2016 exhortation on the family, "Amoris Laetitia."

Another speaker at the conference, Cardinal Willem Eijk of Utrecht, Netherlands, said gender theory undermines the roles of mothers, fathers and married spouses. It also impairs the biological relationship between parents and children and harms the ability to share the church's teachings about God as a Holy Trinity.

Gender theory "radically contradicts the church's teaching that the place of a sexual relationship can only be between a man and woman, within matrimony, and must always be open to procreation," the cardinal said.

The cardinal, who trained as a medical doctor before he became a priest, said those who experience gender dysphoria experience "great suffering," and they should be "taken seriously."

They need to be offered psychological support, including psychotherapy, he said. The answer is not hormonal treatment or surgery.

"Surgery is not the good answer to a psychological problem."