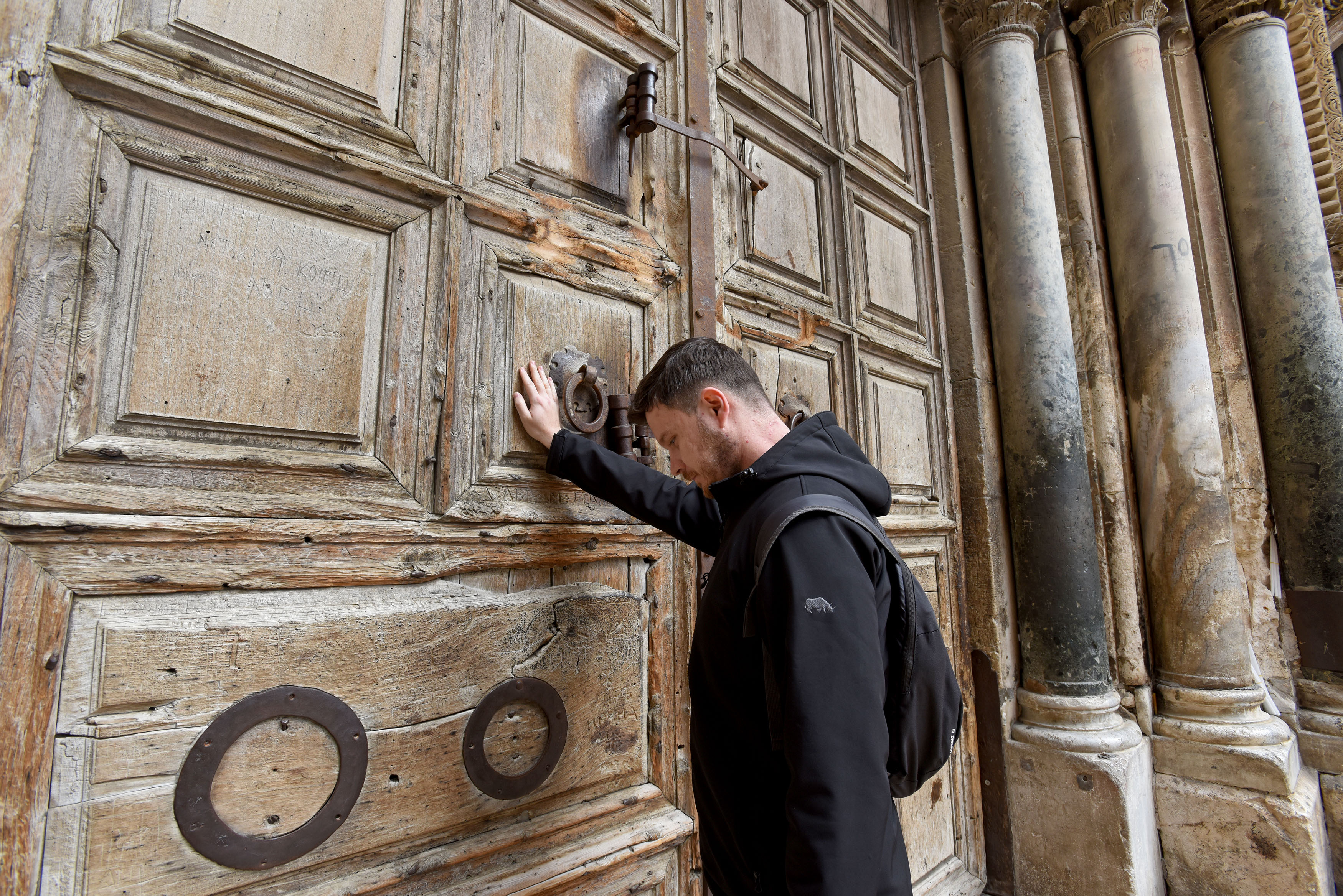 A tourists prays outside the locked doors of the Church of the Holy Sepulcher Feb. 26 in Jerusalem's Old City. Protesting several recent actions they described as a "systematic campaign against the churches and the Christian community in the Holy Land," the heads of Christian churches announced Feb. 25 they were closing of the doors of the church. (CNS/Debbie Hill)

JERUSALEM —​ Protesting several recent actions they described as a "systematic campaign ... against the churches and the Christian community in the Holy Land," the heads of Christian churches announced Feb. 25 they were closing of the doors of the Church of the Holy Sepulcher for an undisclosed period of time.

Bewildered pilgrims milled around the square in front of the church as Greek Orthodox Patriarch Theophilos III — flanked by Franciscan Fr. Francesco Patton, custos of the Holy Land, and Armenian Patriarch Nourhan Manougian — read a short statement to the press. At the same time, the only two people allowed to close the doors — the Muslim custodian of the key, Adeeb Jawad Joudeh Al Husseini, and Muslim door keeper Wajeeh Nuseibeh — closed and locked the doors.

"This systematic and unprecedented attack against Christians in the Holy Land severely violates the most basic ... and sovereign rights, trampling on the delicate fabric of relations between the Christian community and the authorities for decades," the heads of churches said in their statement.

The church leaders were protesting the Jerusalem municipality's intention to impose property taxes on church property, such as hotels and convention centers, not used for worship purposes. The proposal to levy taxes on some properties would run contrary to the unofficial historical tax-exempt status the churches have enjoyed for centuries.

In addition, the church leaders said they oppose a bill in the Israeli parliament that would limit the ability to sell church-owned land to private owners. The bill, whose vote was postponed following the church protest, would be specifically detrimental to the Greek Orthodox Church, which owns large tracts of land in central Jerusalem upon which many private homes are built; many of those 99-year-old building rental contracts will soon expire. The church already has sold some of the land to private owners, and homeowners whose apartments are on the land worry about losing their homes.

Rachel Azaria, the member of Parliament who sponsored the bill, said it is not meant to affect what the church can do with its property, but what happens when the land rights are sold to a third party.

As media gathered to hear the church leaders, pilgrims wandered around the church square, some kneeling in front of the massive wooden doors — the closest they would come to entering the church.

"We had one shot," said Flavia Falcone, 25, an Italian Catholic living in Poland, who had come to Israel for four days. "This was a bad decision. Faith and politics are two different things. I came here all this way to see the church and I find it closed. It is not very pleasant."

It is only the second time the doors to the Church of the Holy Sepulcher have been closed in the middle of the day, other than for traditional religious ceremonies. The other time was 20 years ago, when a visitor to the church began taking down crosses and candles, said Nuseibeh.

The church leaders said taxing commercial properties decreases revenues for the church's good works and breaches "existing agreements and international obligations which guarantee the rights and the privileges of the churches, in what seems as attempt to weaken the Christian presence in Jerusalem."

"The greatest victims in this are those impoverished families who will go without food and housing, as well as the children who will be unable to attend school," they said.

In early February, the Jerusalem municipality announced it would begin collecting $186.4 million in property taxes from some 887 church-owned properties that were not houses of prayer.

Patriarch Theophilos has traveled to meet world leaders, including Pope Francis, on the legislative issue.

Jerusalem Mayor Nir Barkat went on social media in response to the Feb. 25 protest, clarifying that there was no intention to tax places of worship, but rather church businesses such as hotels and conference halls.

"Commercial buildings are not exempt from municipal taxes regardless of their ownership," he said. He noted that, by not taxing commercial properties owned by churches, Jerusalem residents were missing out on revenue.

"We will no longer require Jerusalem's residents to bear or subsidize this huge debt," he said in a tweet, assuring that — like all churches, synagogues and mosques — the Church of the Holy Sepulcher was exempt from municipal taxes.

In Amman, Jordan, Feb. 25, Mohammad al-Momani, Jordanian minister of state for media affairs, called on "the Israeli government to immediately reverse the decisions taken against churches and respect its obligations under international law as an occupying power in East Jerusalem."

Under a 1994 peace accord with Israel, Jordan is recognized as the legal custodian of Christian and Muslim holy sites in Jerusalem. It is also only one of two Arab countries to have a signed peace treaty with Israel.

In a statement made available to Catholic News Service, al-Momani reiterated "Jordan's absolute rejection of Israeli authorities' systematic measures to change the historical and legal status quo in East Jerusalem's holy sites, including Islamic and Christian property and endowments as well as imposing further restrictions on Christian churches in Jerusalem, the most recent of which was the Jerusalem municipality's seizure of church property and bank accounts on the pretext of not paying financial dues related to building taxes."

Meanwhile, the Advisory Council of the Catholic Center for Studies and Media declared its categorical rejection of Israel's moves, saying they are "incompatible with the historical position of the churches in the Holy City and with their relations with the civil authorities.

Contributing to this story was Dale Gavlak in Amman.