NEW YORK — Current and former students at Fordham University have taken the university to court for its refusal to recognize a chapter of Students for Justice in Palestine, The Intercept reports.

Several students are claiming that the club ought to be permitted under Fordham's own rules regarding student groups, but university officials have resisted granting recognition. Students for Justice in Palestine is associated with the "Boycott, Divestment, Sanctions" movement, which advocates penalties against Israel for actions the movement compares to South Africa's apartheid.

The students claim that their attempt to gain approval from Fordham's administration was fraught with questioning and changing requirements that other groups seeking approval never had to face. After more than a year had passed since filing their application in November 2015, the students were told the application had been rejected.

In an email to petitioning students, Keith Eldredge, dean of students at the Lincoln Center campus, wrote that he "cannot support an organization whose sole purpose is advocating political goals of a specific group, and against a specific country, when these goals clearly conflict with and run contrary to the mission and values of the University."

He added, "The call for Boycott, Divestment and Sanctions of Israel presents a barrier to open dialogue and mutual learning and understanding."

"College campuses are where people are supposed to be exposed to new ideas," Rashid Khalidi, co-director of the Center for Palestine Studies at Columbia University, told The Intercept. "There is absolutely no reason why the policies of a country that is engaged in the longest occupation in modern history, which is entirely dependent on the support of the United States, should not be discussed openly and critically in the United States."

A hearing in the case took place Jan. 3. It is unknown when a decision will come.

WASHINGTON — Georgetown University student newspaper The Hoya reports that the university has approved a new Living Learning Community on the campus for the exploration of sex and gender issues. The news comes a year after the first proposal for the new community was turned down.

"Living Learning Communities are residential communities where like-minded individuals can share and deepen their passions through social, educational, and reflective activities," according to the university's residential living website. There are currently 13 such communities at Georgetown; they include spaces for Muslim and Jewish students, students learning French and Spanish, and various other special interests.

The new Living Learning Community will be called "Crossroads: Gender and Sexuality" and will launch next school year. "What this means for the LGBTQ campus community is, in so many words, an assurance of safety and comfortability," GUPride president Chad Gasman told The Hoya.

WICHITA, KAN. — Newman University has canceled an upcoming art exhibition meant to highlight the history of queer people in Kansas, according to a Jan. 17 report in The Wichita Eagle.

The exhibit, by Denver-based artist Genevieve Waller and titled "Rainbow in Reverse: Queer Kansas History," was canceled after an outcry by local conservative Catholics. Jean Heimann, a Wichita-based Catholic writer and speaker, sent an email with the subject line "Newman University sponsors LGBTQ event — Your action is needed!", which has been circulating among Wichita religious groups.

In the email, Heimann asked, "First of all, why is it necessary to expose students to evil? ... Why don't they have someone who has overcome the temptations of this lifestyle discuss their redemption?" She urged readers to contact the university over the issue.

The exhibit was scheduled to open Jan. 26 in conjunction with Wichita's "Final Friday Gallery Crawl," a monthly event during which many local galleries either open or close their current exhibits. Newman's Steckline Gallery will now be closed that night. "Rainbow in Reverse: Queer Kansas History" can still be seen that night however, as another local gallery, Harvester Arts, will now hold the exhibition.

OWENSBORO, KY. — In a Jan. 9 press release, Brescia University announced that it will name its new academic building the C.E. Field Center for Professional Studies at Brescia University, in honor of Charles Eldred Field, a philanthropist whose family and company have donated more than $2 million to the university.

The C.E. Field Center for Professional Studies will begin construction in April. It will be home to the university's schools of business, education and social work, as well as "a 150-seat auditorium, the university's art gallery, a small chapel area, a digital studio for innovative learning, computer labs, and seminar rooms," according to the press release. 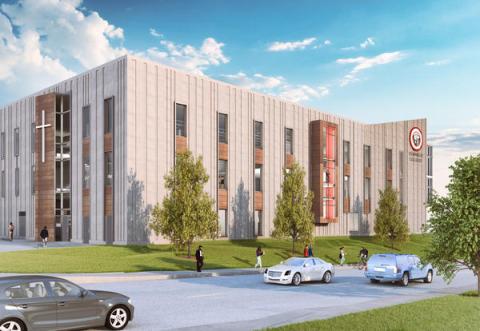 According to a Jan. 10 press release, the renovations added "nine new classrooms, six faculty/staff offices, a computer lab and a collaborative study space," and also "modernized the elevator, added sprinklers, and improved mechanical systems throughout the building. Academic space doubled to 22,000 square feet."

Donnelly College's campus master plan, adopted in 2010, began with the addition of new elevators to the main tower and the grand opening of a community event center.

The third phase will involve the building of a new main academic and administrative building, and will also add more green space to the campus.