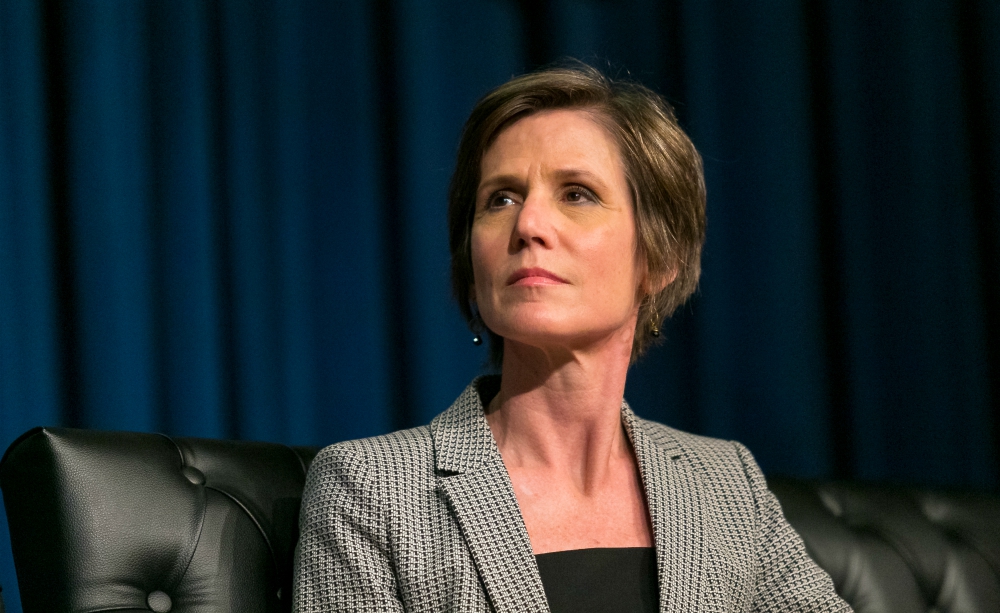 WASHINGTON — Former acting U.S. Attorney General Sally Yates will be joining Georgetown Law as a Distinguished Visitors from Government this fall, according to a press release by the law school. Yates will deliver Georgetown Law’s annual Philip A. Hart Lecture on Nov. 1.

The White House fired Yates from her position after she refused to defend President Donald Trump’s Muslim travel ban.

Others in the program this fall are:

OMAHA, NEB. — On Sept. 28-29, Creighton University is hosting the Social Reconciliation Conference, according to a feature published in the Omaha World-Herald. A flyer for the conference describes it as a "national conference with scholars from 9 institutions reflecting on historical and contemporary examples of peacebuilding, social repair, and political forgiveness in the Catholic tradition.”

“This conference is a chance for us to come together and talk about both sides — conflict and violence in the Catholic tradition, but also past and present efforts toward reconciliation,” said Jay Carney, organizer of the conference and an associate professor in the university’s Department of Theology. “We want the focus to be on what you can develop out of the historical tradition that could have a constructive impact on questions of peacebuilding in today’s world.”

The event is free and open to the public.

DALLAS, PA. — Misericordia University announced in a press release Sept. 27 that it is launching a Center for Human Dignity in Bioethics, Medicine, and Health. The center will focus on the study of medical ethics and the ethical boundaries of medical research practices.

Stacy Gallin, currently the director of the Maimonides Institute for Medicine, Ethics and the Holocaust in Freehold, New Jersey, will serve as director.

Students enrolled in health and medical sciences programs make up over 40 percent of the Misericordia University’s student body.

"We plan to develop a new generation of scholars, bioethicists, and future community leaders who are engaged in research and program development that goes beyond the classroom," Gallin said in the press release. "We will offer programs that aim to transcend generational, religious and professional boundaries, and unite the community in service of a shared ideal: the importance of balancing necessary medical and scientific progress with the need to protect the sanctity of all human life."

MILWAUKEE — Marquette University’s Opus College of Engineering has received a $1 million gift from entrepreneur and philanthropist Michael Cudahy that will fund five full scholarships that will cover tuition, room and board, according to a press release by the university. Four of the students started at Marquette this semester and are the first in their families to attend college.

“Mike Cudahy has been a great friend of Marquette University and of mine, and this gift further honors his legacy in Milwaukee,” Marquette President Michael Lovell said in the press release. “I know he shares Marquette’s deep appreciation for keeping higher education accessible. The lives of scholarship recipients and their families will be forever changed for the good thanks to Mike’s continuing generosity.”

TERRE HAUTE, IND. — St. Mary-of-the-Woods College is reporting its highest enrollment numbers since the early 1970s, according to the Tribune-Star. In a 45 percent increase in one year, 377 on-campus students are enrolled for this fall.

St. Mary-of-the-Woods College, founded in 1840, was a women’s college for its first 175 years of operation. It began admitting male students in 2015. Since then, the college has seen an increase in enrollment of both male and female students, a trend it hopes to continue through its Aspire Higher Strategic Plan, which also aims to grow the college’s nursing and athletic programs.

[James Dearie is a NCR Bertelsen intern. His email address is jdearie@ncronline.org.]