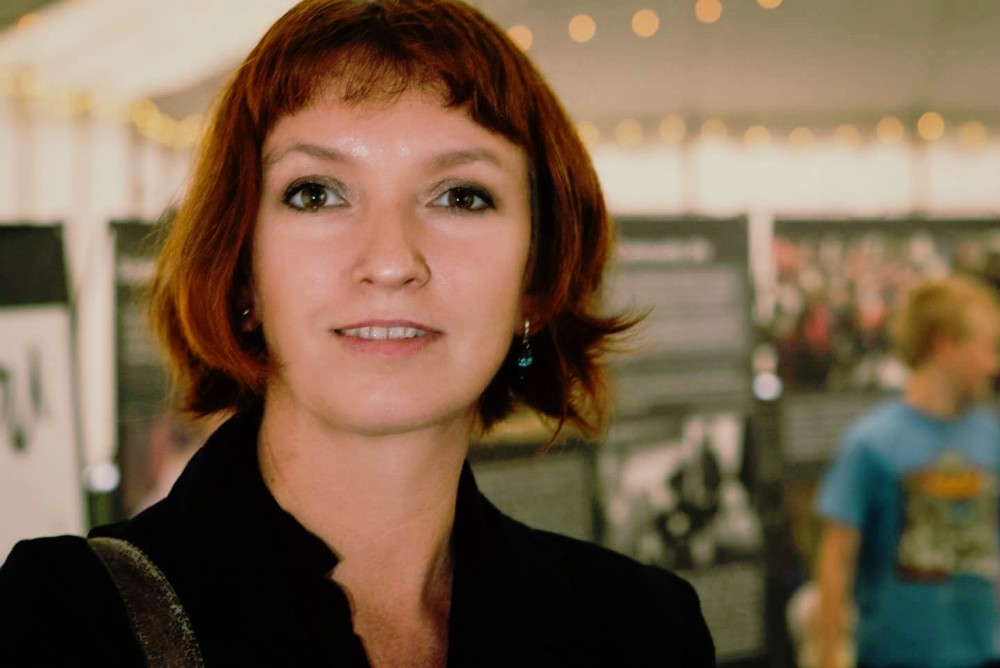 Catholic bloggers and others are rallying to support yet another Catholic smeared by right-wing Catholic media last week. Rebecca Bratten Weiss believes the same colleagues who gathered "evidence" for the negative article about her also contributed to her adjunct teaching contract not being renewed this year.

Weiss, an adjunct literature professor at Franciscan University of Steubenville in Ohio and a co-founder of the "New Pro-Life Movement," which tries to connect abortion and other life issues, was the subject of a 3,000-word article that starts out as an indictment of the "seamless garment" approach but quickly becomes a personal attack of her.

Ever since she spoke out against some pro-lifers' support of Donald Trump during the 2016 presidential election, Bratten Weiss has been criticized by Catholics on the extreme right, so she has been "meticulous about not saying anything that could be used against me," she told NCR.

But that didn't stop guest columnist Doug Grane from compiling a list of grievances about Bratten Weiss, with material — including screen shots from private Facebook pages and groups — that she believes only people close to her could have obtained.

Grane's Sept. 14 blog post, titled "The 'seamless garment' is a poison pill that would kill the pro-life movement," was published by LifeSiteNews, one of several right-wing Catholic sites that have been criticizing people it deems not authentically Catholic, including Pope Francis himself.

LifeSiteNews is also behind a petition drive to have Jesuit Fr. James Martin removed from his position as a consultor to the Vatican’s Secretariat for Communication and it helped organize a protest of a planned talk at the Theological College at the Catholic University of America. The Theological College canceled the talk last week. 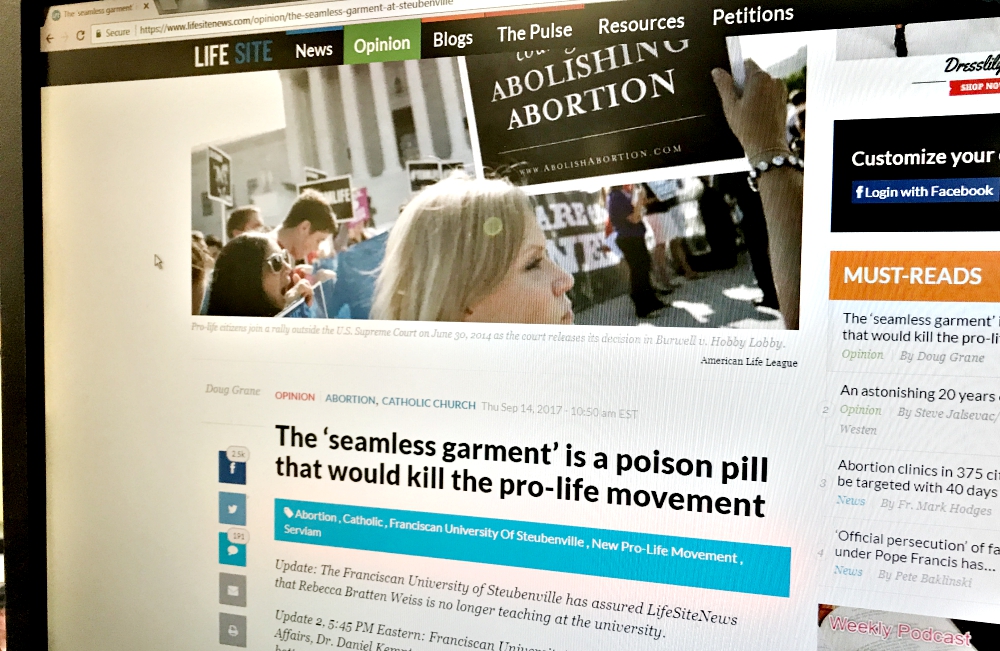 The article about Bratten Weiss called her "an outspoken radical feminist" and questioned why she is teaching at a "traditionally faithful Catholic university."

She no longer does, LifeSiteNews later added in an update to the story, implying that such a decision was the result of its article. However, a Sept. 14 statement from Daniel Kempton, the university's vice president for academic affairs, insisted that decisions about adjunct faculty appointments were made "prior to the current story being posted."

An updated statement provided to NCR from the university noted that the LifeSiteNews article has "significant inaccuracies."

"This was not a case of termination," the Sept. 18 statement said. "Ms. Bratten Weiss taught on an adjunct basis, and as is our practice, we reviewed adjunct positions earlier this summer and made the decision then not to offer her a contract."

Bratten Weiss confirms that the English Department chair told her in late summer that she would not be teaching at Franciscan University this fall as originally planned, after he showed her "evidence" that essentially said she wasn't "pro-life enough," she said.

She feels betrayed by university colleagues, who she believes helped provide the documentation, and says she will miss teaching after 11 years at Steubenville. "It was a big punch in the gut to realize these people had been in an alliance against me and that the university had taken them at face value without giving me an opportunity to defend myself," she said.

She added, "Nothing I have ever written has been contrary to church teaching."

Among the criticisms in the article were her references to the HBO series "Game of Thrones" (which contains some sexually explicit scenes), her use of Vladimir Nabokov's Lolita in a literature course, and her participation on a panel on "Finding the Sacred in the Profane: The Role of Vulgarity in Religious Art" at an academic conference at the University of Notre Dame.

"None of [the allegations were] anything that an ordinary university would have a problem with," she said. "Going to a conference at Notre Dame would normally add to my [curriculum vitae], but not in this case."

Bratten Weiss blogs at Suspended in Her Jar, which is hosted by Patheos, a religion and spirituality website. She chose not to respond to the article on her blog, but three fellow Patheos bloggers quickly came to her defense.

Catholic blogger Mark Shea, a former columnist for the conservative National Catholic Register, called Bratten Weiss a "hero and white martyr" of the "Right Wing Noise Machine." In a Sept. 14 blog post, Shea wrote that he stands with Bratten Weiss and blasted the "anti-abortion-but-not-prolife Republican Rite Industrial Complex" for its attack on her:

The Lifesite hit piece reads like the diary of a creepy stalker bent on thinking dirty thoughts about a woman he can't quit. It's replete with guilt by association tactics, out of context FB screencaps, and outrageous lies to the effect that a consistent life ethic (which is, y'know, simply a way of saying "the whole teaching of the Church") is some kind of evil plot to attack the unborn (because what is more pro-abortion than the Church's teaching?). It also manages to smear Communion and Liberation, turn aesthetic and literary judgments and opinions into evidence in a kangaroo heresy trial, darkly suggest that Rebecca is some kind of anti-Catholic mole and seductress, and viciously collaborate with Franciscan University to expose her unjust firing by that institution for the delectation of a mob.

Dave Armstrong, a blogger and self-identified Catholic apologist, admitted that he disagrees with Bratten Weiss on some issues but defended her right to be treated fairly, which LifeSiteNews did not do, he said in a Sept. 16 blog post.

He criticized the author and LifeSiteNews for not contacting Bratten Weiss for comment before publishing the article, noting that there could be issues of "selective citations, omissions of other relevant material, out-of-context quotations, ignoring of the overall context of a piece of writing or lecture" in the reporting of the piece.

Armstrong describes himself as "by no means a political liberal" and "rock-solid theologically orthodox." He said he has disagreed with the seamless garment approach to pro-life issues, but sees the disagreements as "a dispute between brothers in Christ, not among enemies."

Another Catholic blogger, Mary Pezzulo, described her experiences with Bratten Weiss and Suzanne Lewis — wife of Steubenville English Department chair Stephen Lewis, who are both mentioned in the LifeSiteNews article — as part of a Communion and Liberation group in Steubenville. Both women offered Pezzulo food when she was in need, she explains in a Sept. 15 blog post titled "Who was a faithful Catholic witness?"

Pezzulo also reprinted on her blog, with permission, a Facebook post from John Cavanaugh-O'Keefe, a longtime pro-life activist, in which he says he is "appalled" by the attack on Bratten Weiss. He also notes that, of the two co-founders of the New Pro-Life Movement — a man and a woman — LifeSiteNews chose to attack the woman.

Bratten Weiss also believes attacks like the one against her hurt the pro-life movement. "It seems anyone who is doing damage to their 'brand' is going to be targeted for destruction," she said. "That's a distortion and misrepresentation of our faith. That's not Catholic or pro-life, to my mind."