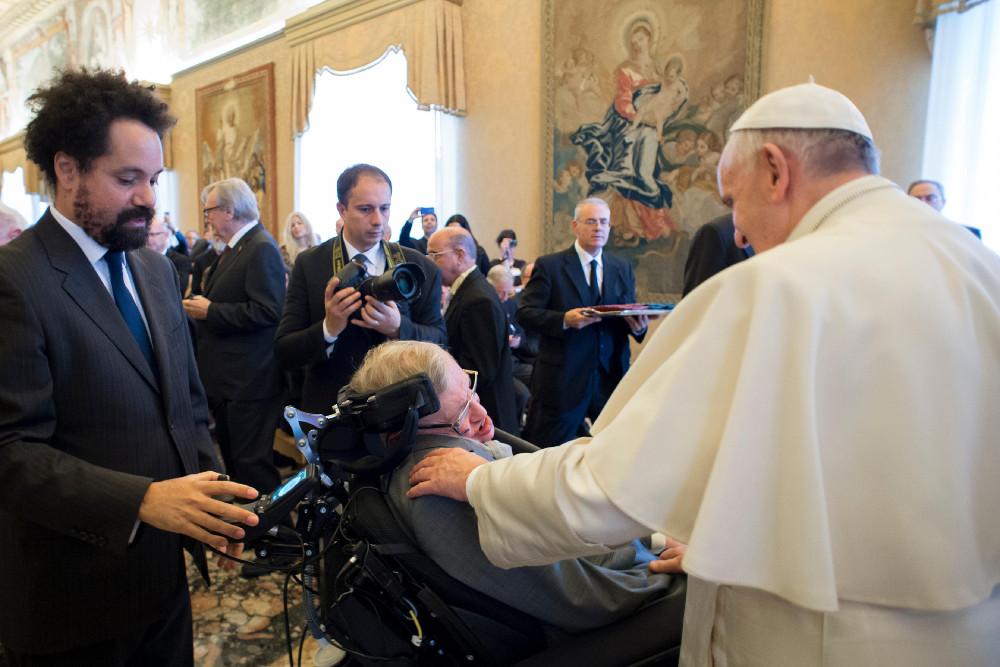 Pope Francis greets British theoretical physicist and cosmologist Stephen Hawking, during an audience with participants attending a plenary session of the Pontifical Academy of Sciences at the Vatican Nov. 28. (CNS /L'Osservatore Romano, handout)

It happens a lot after famous nonbelievers die: People claim the nonbeliever had a deathbed conversion to Christianity.

And it happened again after the death last week of physicist Stephen Hawking, who, by his own account, did not believe in God.

“We are each free to believe what we want and it is my view that the simplest explanation is there is no God,” Hawking said in 2011. “No one created the universe and no one directs our fate.”

But that did not stop a Facebook page called Catholics Online from claiming that Hawking uttered “I believe” in his mechanical voice after a meeting with Pope Francis just before his death.

They even posted a picture to “prove” it.

Trouble is, it isn’t true. The investigative site Snopes called the claim and its source “disreputable” before slapping the story with its bright red “FALSE” sticker.

“This Facebook post is just another in a litany of fabricated claims about famous non-believers,” the Snopes crew writes. “The source is a Facebook page associated with the disreputable website FrancisMary.org, which appears to have no formal affiliation with the Catholic church and routinely posts clickbait articles touting videos of Jesus Christ appearing in the flesh during a church service, or as an angel on a white horse fighting in Israel.”

The photograph itself was not doctored, Snopes ruled. But the pontiff and the physicist met at the Vatican in November 2016 for a scheduled meeting of the Pontifical Academy of Sciences, of which Hawking was a longtime and valued member. The academy has no belief requirements for members.

Claims of deathbed conversions of atheists to Christianity are so common they are almost a meme. Naturalist Charles Darwin, orator Robert Ingersoll, astronomer Carl Sagan, Dutch soccer star Johan Cruyff and writer Christopher Hitchens were all the subjects of supposed deathbed conversions to belief in a Christian God.

The most recent example came from Larry Alex Taunton, a Christian apologist, who knew Hitchens and wrote a book titled “The Faith of Christopher Hitchens” a year after Hitchens’ death in 2010.

In it, Taunton claimed Hitchens was “teetering on the edge of belief” shortly before he died of esophageal cancer, too famous for his outspoken atheism to admit he was privately “entering forbidden territory, crossing enemy lines, exploring what he had ignored or misrepresented for so long.”

“At the end of his life, Christopher’s searches had brought him willingly, if secretly, to the altar,” Taunton writes at the end of the book. “Precisely what he did there, no one knows.”

Exactly, Taunton’s critics responded (along with a few other choice words like “petty” and “disgusting”). No knows what happens in the hearts of people at the moment of their deaths. But in the case of Hawking, Snopes points out that there was zero evidence to indicate he had embraced a belief in God.

And no secret conversion should be read in the news that Hawking’s ashes will be laid in Westminster Abbey this fall, an honor for eminent Britons. Darwin rests there, too.