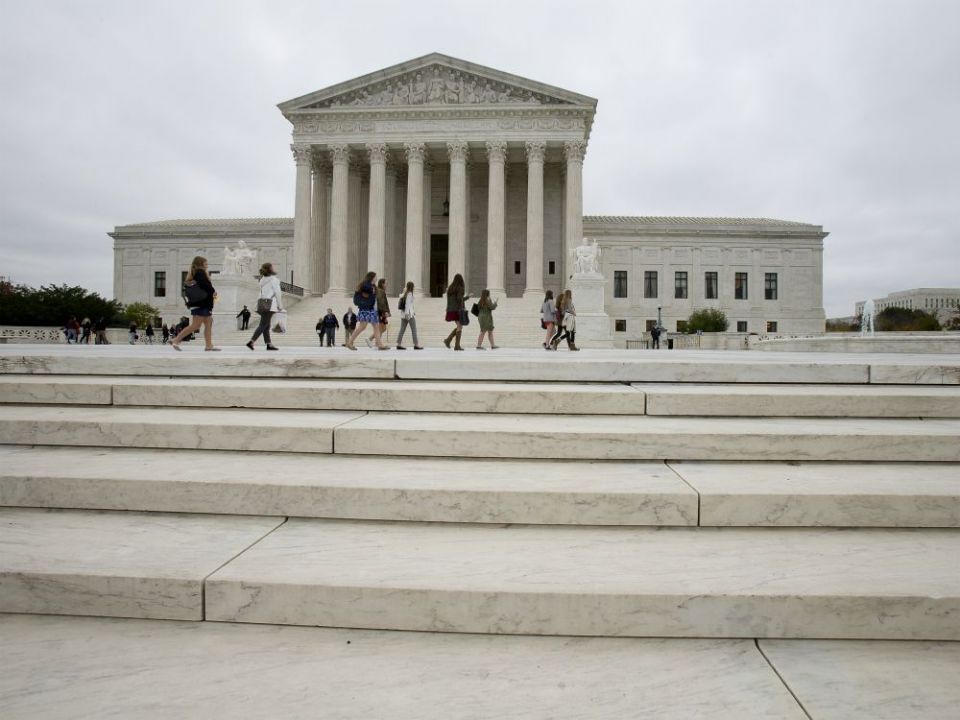 Next week, the U.S. Supreme Court will hear oral arguments in the case of Janus v. AFSCME. It is a case that implicates fundamental principles of Catholic social thought.

The issue is the funding of public employee unions. As in many states, the public employee unions of Illinois are funded through the payment of mandatory fees, which are imposed on all eligible employees whether they belong to the union or not. The fees are mandatory as to prevent the "free rider" problem — employees who wish to receive the benefits of union representation without paying for those services — and to ensure that the union has sufficient resources to meet its responsibilities.

Mark Janus, the plaintiff, has challenged this system on libertarian grounds: union membership represents a form of speech, and no one should be compelled to subsidize a perspective that he or she internally disagrees with; union fees are a form of subsidy and therefore represent an infringement on free speech rights. This interpretation of American labor law is profoundly at odds with Catholic social thought, which has always held in high esteem the associational rights of labor unions. It is equally at odds with the premises of American labor law, which, like Catholic social thought, places a high premium on the principle of solidarity.

I will begin with papal teaching. In June 2017, Pope Francis issued a ringing endorsement of labor unions. Unions, Francis makes clear, serve vital social functions. They are, indeed, a manifestation of "social nature of the economy." It is a falsity, it is a denial of objective reality, to describe economies as being by or about individuals. Economies are not formed or sustained by monads dealing with other monads. They are built by people coming together, organizing groups, drafting rules, buying and selling goods and services, and in the process distinguishing just from unjust practices.

Within this larger framework, according to Francis, who reiterates more than a century of church teaching, robust labor unions must have a place. They serve a prophetic role in defending the vulnerable and "the discarded" from being marginalized or reduced to numerical computations of profits and loss. But they also serve as a means of mediating the power disparities between employers and employees. As early as 1891, Pope Leo XIII recognized that there was a great gulf in power between economically vulnerable workers and economically powerful employers (Rerum Novarum, 47). Leo saw the Bible itself as endorsing this view.

This line of thinking was substantially developed by St. John Paul II in his reflections on the principle of solidarity. In his encyclical Sollicitudo Rei Socialis ("On the Social Question") he described "solidarity [as] undoubtedly a Christian virtue." Solidarity, abstractly considered, was the sense of social unity that drew persons together and allowed them to perceive other members of the group as possessing fundamental rights.

Pope John Paul II equally made clear that the principle of solidarity must shape labor relations. Indeed, he dedicated an entire section of his 1981 encyclical Laborem Exercens to the theme of "worker solidarity." The great danger that one must confront, the sainted pope argued, was the domination of employees by employers. In many places, John Paul acknowledged, the labor movement was strong and should be maintained. But one must always be on guard against "power systems" that permit "flagrant injustices to persist or [that] have created new ones." Solidarity, the formation of strong labor associations with the purpose of "achiev[ing] social justice," must be allowed to flourish.

The strength of individuals, bonded together for better wages and working conditions, is not only a Catholic teaching, it is reflected in the National Labor Relations Act. Employees have "the right to self-organization," to join or form "labor organizations" and "to bargain collectively." Congress enacted the National Labor Relations Act, and President Franklin D. Roosevelt signed it precisely for the purpose of equalizing bargaining power.

In the whole history of the United States, there are few clearer examples of the convergence of Catholic social thought and American public policy than the National Labor Relations Act. The two systems of thought converge precisely on the importance of solidarity. Solidarity is a Christian virtue that aims to promote social justice; it is also the foundation of American labor organizations and a precept of federal law.

The facts in Janus v. AFSCME must be the starting point in analyzing this case. Illinois, like many states, has adopted statutes permitting the formation of public-employee unions, and these unions are allowed to assess mandatory union fees from all public employees whether they belong to the union or not. A similar system was upheld in Abood v. Detroit Board of Education.

In that 1977 decision, the Republican Justice Potter Stewart upheld a similar mandatory fee program assessed by a teacher's union in the Detroit public schools. He acknowledged that not every teacher belonged to the teacher's union and that they were free not to join. He acknowledged as well that they might have differences with the political positions the union had taken. One employee might object to unions on principle while another employee might feel that the union has compromised its integrity in its dealings with management. One employee might disagree on moral grounds with the decision to cover family planning as part of the health care package, while another might be concerned that there were still gaps in coverage. "[I]deological objections," Stewart conceded, might be boundless, and these objections did have some constitutional merit.

But, Stewart reasoned, there was a larger principle involved. While he did not use the word "solidarity," it fairly screamed its presence between the lines. Citing case law dating to 1956, Stewart argued that formation of the group — the collective bargaining unit to use the formal language of the labor law — must outweigh the constitutional considerations. Labor peace, wages, hours, working conditions, all were of greater weight to Stewart than worries over whether dues-paying non-members of the union might dissent from one or another position the union has taken in the public square.

The argument rejected by the prudently conservative Stewart has made a comeback in our own, more deeply libertarian age. Lawyers for Janus, the plaintiff in this case, argue simply: speech is sacred in the United States, and it is a fundamental principle of American constitutional law that no one "should subsidize the speech of a third party that he or she does not wish to support." [Brief For Petitioner, Janus v. AFSCME (quoting Harris v. Quinn). Harris v. Quinn, cited by the brief, was decided in 2014 and similarly sought to restrict public employee associational rights.

Read literally and expansively, Harris v. Quinn would cause havoc because government continuously subsidizes speech with which others might disagree. Television licenses are a form of public subsidy, and so are radio licenses. The granting of parade permits and the use of public security personnel at protest gatherings are another. Janus would have the court read Harris in potentially mischievous ways.

Balance in the name of larger social goods, that was the principle Abood stood for. Balance historically has been seen as a conservative principle. It recognizes that society reflects many competing social values, and that it is just and appropriate to limit some rights in the name of preserving balance between groups and interests. The brief for the State of Illinois, defending its system of financing public employees, indicates that the law has repeatedly struck such balances. The Supreme Court has sustained congressional and state limitations on the free-speech rights of public employees in the name of maintaining neutrality between competing political viewpoints. The Supreme Court has also upheld the right of state bar associations to impose mandatory fees on members, even where individual members might dissent from a stance taken by the association. Janus properly should be read as belonging to this line of cases.

Balance in this context also conforms to the principles of Catholic social thought. Leo, John Paul, Francis, and all other popes of the 20th and 21st centuries have insisted on the centrality of labor. It is bedrock teaching of the Catholic magisterium that labor has rights that must be respected by public authorities. It behooves a Supreme Court, whose majority is Catholic, to take seriously the teaching of the church.

[Charles J. Reid Jr. is a professor of law at the University of St. Thomas in Minnesota.]