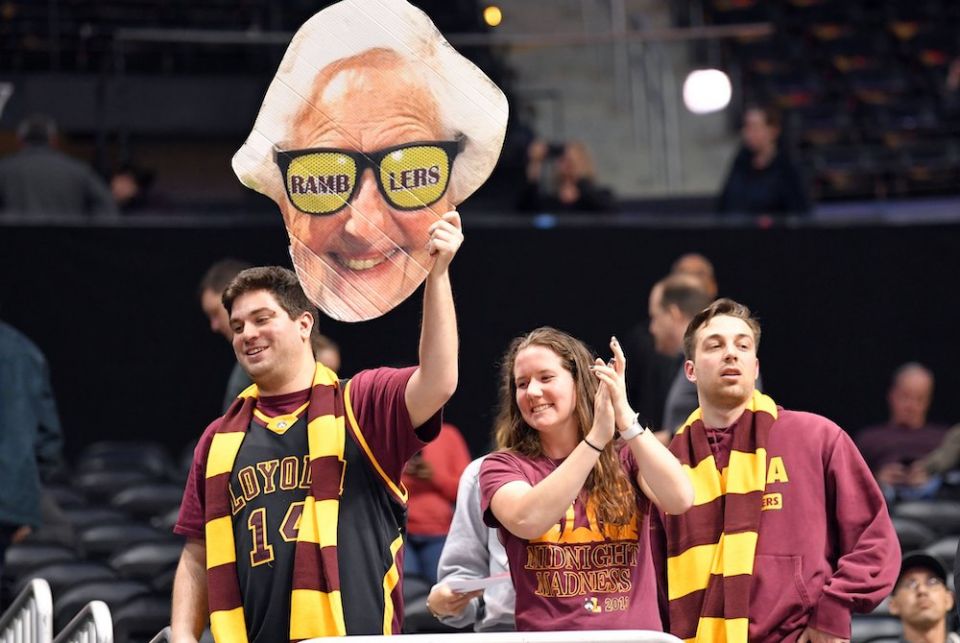 Loyola Ramblers fans hold up a poster of Sr. Jean Dolores Schmidt, longtime chaplain of the men's basketball team, after the team defeated the Kansas State Wildcats in the championship game of the South regional of the 2018 NCAA Tournament in Atlanta. In 2021, they earned a spot in the Sweet 16 and take on Oregon State March 27. (CNS/USA TODAY Sports via Reuters/Dale Zanine)

When Sr. Jean Dolores Schmidt's now famous pre-game prayer went viral before the Loyola Chicago Ramblers-Illinois Fighting Illini contest the morning of March 21, so many commentators noted that the prayer sounded as much like a scouting report as it did a petition for a Loyola victory. And they were right.

Sister Jean, a sister of Charity of the Blessed Virgin Mary who has long scouted opponents as part of her role as chaplain, approaches the mystery of basketball the same way many Catholics have long approached the mystery of reality: through the dynamic relationship between faith and reason.

Sister Jean prayed humbly to God that "as we play the Fighting Illini, we ask for special help to overcome this team and get a great win," but then she also let the Almighty know that she had done her homework, that "we have a great opportunity to convert rebounds as this team makes about 50% of layups and 30% of its 3 points. Our defense can take care of that." Sister Jean was correct, of course, as Loyola's defense is rated the best in the country — holding its opponents to under 56 points a game — a fact the Fighting Illini learned all too well last weekend in the battle for Illinois.

This kind of "both/and" dynamic, so fundamental in Catholic education, is also the fertile seedbed from which Coach Porter Moser and his dedicated staff have built a culture at Loyola. Just after our storied Final Four run in 2018, we in the Loyola community were informed — through a well-sustained marketing campaign — that the success of the men's basketball team was "Created by Culture." Banners bearing this slogan were festooned in parking garages while other pious baubles transmitting this message were made available for sale in the Loyola bookstore and online.

It would be easy to pivot this short piece on this point and move to a critique of the elephant in the room: the commercialization of college sports and the students who play them. So much has been written about the steady relegation of college athletics to a marketplace commodity (as opposed to retaining the experience as the vital component of adolescent education that it is) — and the topic emerges as a worthy phenomenon to incubate in the faith/reason crucible. And when we do incubate it in this way, we begin to see that not all coaches and programs navigate the muddy waters of high-profile, big-money athletics in the same way.

We find also that serious questions like these provide us with an opportunity for discernment, a practice — part art and part science — particularly important in Jesuit-Catholic traditions. In discernment, we locate the right path against the allure of so many others; and we find that the beacons of faith and reason (and ethics and justice) exist precisely in order to help locate the best way forward.

As Coach Moser is fond of saying, "There is a right way to do things," and this "right way" — which can also be envisioned as "right relationship" (to people, ideas, and things) — is derived from a set of values, which, in turn, creates a particular culture. In short, doing things in the right way is a philosophy; and philosophies both create cultures and, in return, are sustained by them. One need only look to a Rambler game to see how the "right way" manifests itself on the court. The "right way," far from being a narrow way, relies on the fusion of many smaller ways coming together to form a unified whole. It is a thrill to watch.

If you are thinking of John Wooden here, you are well on the scent. UCLA's "Wizard of Westwood" (and arguably the greatest coach of all time in any sport) was famous for creating a particular culture. The fact that his teams won 10 championships in 12 years is something of an interesting byproduct. Wooden, a natural teacher, spoke more to his players about wearing proper socks and tying up shoelaces than he did about winning — and this gives us a most basic insight into his philosophy.

His "Pyramid of Success" is emblazoned on the hearts and minds of most every good coach I've ever met and has been applied to many other disciplines and fields as well. Wooden was a "both/and" thinker if ever there was one, and his pyramid is characterized by the dynamic interpenetration of virtues, each one relying on the others. The pyramid's base is built on virtues like friendship, cooperation and loyalty and reaches its apex with the "both/and" interplay between faith and patience, that is, between prayer and work.

Moser, along with several others in college basketball, proceed in this way as well: lots of attention on community, communication, selflessness and interpersonal care — virtues so central to the broad mission of Catholic education. While in no way limited to coaches and programs at Catholic colleges and universities (even if Wooden was something of an outlier), we often see more explicit connections between university mission and the culture of athletics in Catholic settings.

This should come as no surprise, as mission and identity are amplified in unique ways in Catholic institutions, and coaches are often given the gift of time in these environments to create the cultures they envision. Famously, Mark Few (Gonzaga University), Jay Wright (Villanova University) and Loyola's Moser have all passed up more lucrative opportunities, choosing instead to go "all in" at home, to stay in smaller contexts so as to build things that really matter — balanced programs, well-formed student-athletes, and transformed lives — "all in" for the long haul.

"Created by Culture" shines a light on Loyola and how its programs aim at their core to build on the fertile relationship between faith and reason, and the call for justice that this relationship always engenders. It shines a light on the Jesuit approach of care for the whole person, its concerted emphasis on accessibility for underserved communities and the university's current strategic impetus to bring many disciplines together to help solve complex social problems, like environmental sustainability, systemic racism, justice reform and economic disparities. Of course there are marketing and PR benefits; and the call for Loyola is to utilize sporting revenues the "right way" — furthering the mission of seeking God in all things and working to expand knowledge in the service of humanity through learning, justice and faith.

"Created by Culture" is deeper than a keychain slogan and goes back much further than the 2018 Final Four run. Engaging a living tradition against many other cultural distractions is a kind of positive defense that Jesuits have employed for 480 years. Of course, defense wins games; but defense means little without a good offense to complement it. But respecting one's opponent — knowing their strengths and weaknesses — helps you win. And, under the banner of faith, reason and justice, winning takes many forms. 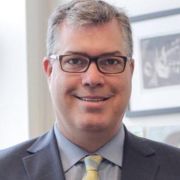 Michael P. Murphy is director of the Hank Center for the Catholic Intellectual Heritage at Loyola University Chicago, and also directs the university's Catholic studies minor.

Commentary | College basketball and the both/and of Catholic education