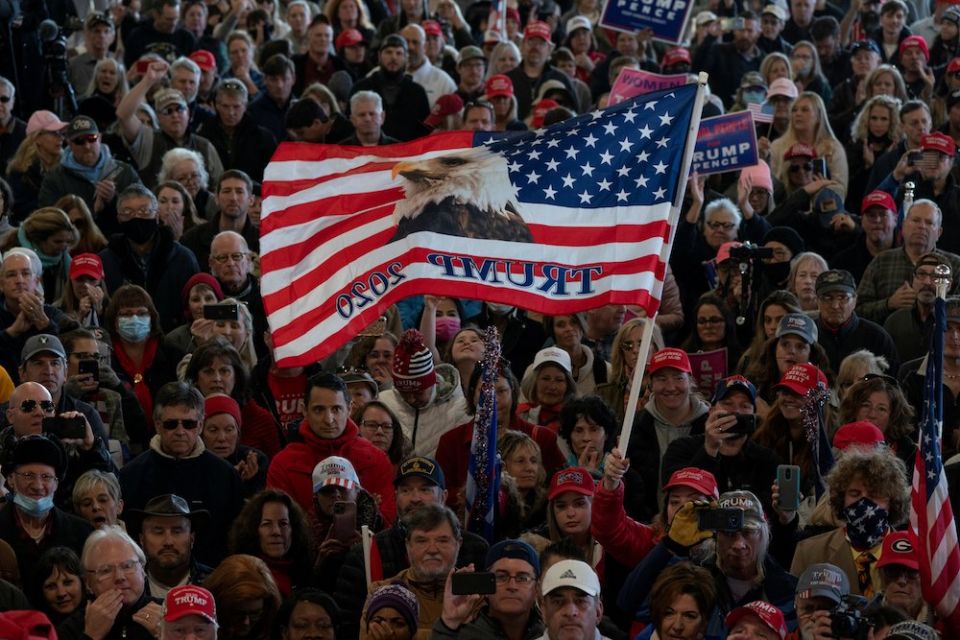 The president's meltdown not only continues, it is becoming more volcanic and more comprehensive.

The most remarkable thing about his 46-minute rant last week was not the reiteration of debunked allegations about extensive voter fraud. Nor was it that the president invited the United States Supreme Court to throw out millions of votes so that "I very easily win in all states."

No, the most remarkable thing about that video rant was that the White House had to distribute it via Facebook. The most powerful man in the world has been reduced to using Facebook to disseminate his message.

The implosion of the Trump presidency has the feel of the fifth act in a Shakespearean tragedy, the psychological and moral failings of the characters bringing about death and destruction. I would not push the analogy too far: Hamlet was noble, and the love between Romeo and Juliet was pure. There is nothing noble or pure about Donald Trump and the cast of characters who are joining him in his bunker for the final scene of the drama.

Certainly, no one would mistake Attorney General William Barr for a noble if misguided soul. His speech last year at the University of Notre Dame Law School showed a man whose understanding of American history was completely at the service of his ideology. He brings none of the care and the cautiousness a true historian brings to the task. He imagines the enemies of religion to be numerous and powerful, though I think most secularists simply gave up caring and walked away from religion peacefully. America has never been a land for Jacobins, no matter how badly Barr's perfervid politico-cultural paranoia requires that he conjure them.

My favorite political cartoon of the year, from Tom Curry at The Big Bend Gazette, featured Barr dressed as a prostitute — and a hard-looking prostitute at that — standing outside the Department of Justice. However dangerous his ideology, it is not why we should detest Barr and work to ensure that his reputation has attached to it all the opprobrium he has earned. It is the fact that he allowed himself to become Trump's legal whore, his willingness to lie about the Mueller report, his misrepresentation of an inspector general's report on the origins of the Russian interference probe, and, more recently, his participation in the decision to clear peaceful protesters from Lafayette Square so the president could have a photo op. Barr's effort to short-circuit the Justice Department's successful prosecution of disgraced former Gen. Michael Flynn was an especially egregious abuse of power.

Now, unwilling to state that there was widespread election fraud when there was not, Barr finds that he sold his soul for naught. Is he surprised? Is anyone surprised that, for Trump, loyalty is a one-way street?

Trump is reportedly thinking about firing Barr because the attorney general is not doing enough to investigate voter fraud. I hope the president does not fire Barr. The nation should be spared any attempt by Barr to rehabilitate his reputation, which such a firing would occasion.

Sens. David Perdue and Kelly Loeffler of Georgia may find their reelection bids overwhelmed by the president's psychodrama as well. Pro-Trump attorney Lin Wood has joined forces with Sidney Powell, the lawyer whose conspiracy theories were so zany even Rudy Giuliani had to cut her loose. Not only is their message of rigged elections in Georgia an open invitation to MAGA devotees to not bother voting in the January runoff election, but Wood is actually threatening to encourage a boycott of that crucial vote.

Should enough Trump voters sit out the Georgia runoff, and the Democrats win both of those seats, control of the U.S. Senate would flip, so not only would Perdue and Loeffler be ousted from their seats, but Sen. Mitch McConnell would have to vacate the majority leader's office. He, too, has been only too willing to play along with Trump to achieve his own objectives. Watching him lose power because of Trump's vindictiveness would be delicious in the extreme.

No matter how the next few weeks play out, I hope we get to see more of Melissa Carone, the pro-Trump witness at Michigan's legislative hearings on election fraud. Her exchange with Rep. Steven Johnson, who is Republican, was so bizarre, the videotape went viral. Even Giuliani tried to shut her down.

I hope the country always remembers the true believers like Carone, but also the turncoats like Barr and the wafflers like Perdue and Loeffler. After all, the real difference between them lies only in the manner in which Trump treated them.

Shakespearean tragedy ends on a moral note: Hamlet is given an honorable soldier's burial, the Capulets and Montagues make peace, defeated Brutus is given a tribute because his intentions were noble. The end of the Trump presidency has its tragic aspect, but it is not a tragedy. It is a farce. There will be no moral recalibration in the last few lines of this play, no denouement that seeks to satisfy justice or mercy. The bit players are heading for the exits while the principals flail.

It is chaotic, narcissistic, the whole presidency in compact and distilled form, and the only thing to be determined is how deep a hole they dig for themselves. I hope it is deep enough that they can never climb out of it, not a one of them.

Column | Act V of the Trump presidency is not pretty