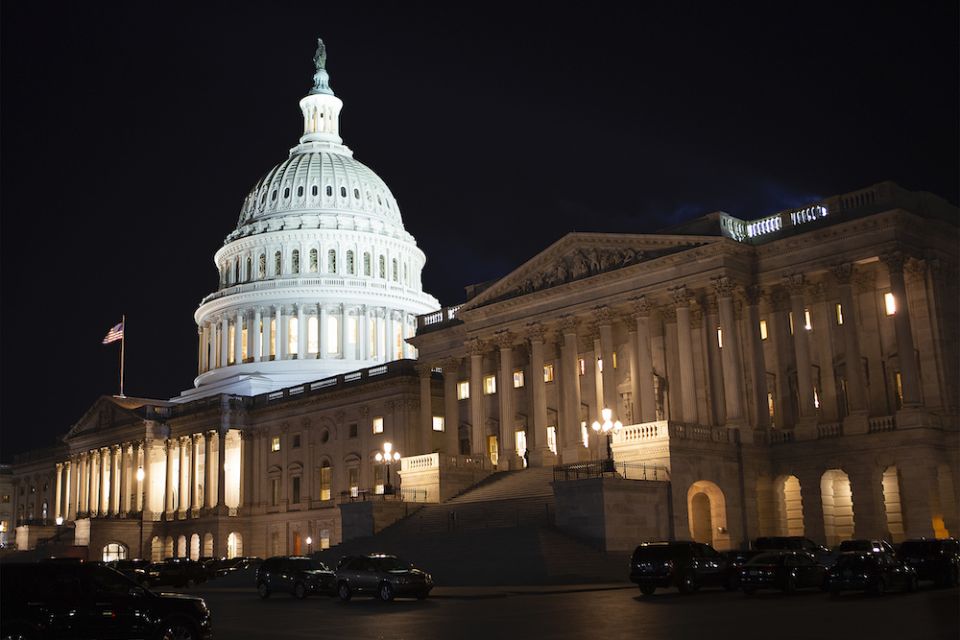 The U.S. Capitol in Washington is seen at night Jan. 21. The Senate debated the rules for the impeachment trial of President Donald John Trump that same night. (CNS/Tyler Orsburn)

Religion and politics always get mixed up in strange ways. Pick a society and a century, and you will find something that makes you scratch your head.

Still, one of the most remarkable oddities of our time is that the political party led by someone whose career is one continuous form of self-promotion has been embraced by many people who claim to believe that he who said "blessed are the meek" is the savior of the world. And that oddity is on full display among the president's impeachment legal team, which is led by lawyers with really distinctive religious profiles.

The lead counsel is Pat Cipollone, who is White House counsel and one of the most prominent conservative Catholics in the administration. According to Laura Ingraham, he is responsible for her conversion to Catholicism, which is one reason not to like him. Ingraham has become the most hateful of the Fox News primetime hosts, and that is saying something.

He co-founded the National Catholic Prayer Breakfast, which is really the "conservative Catholic prayer breakfast." I remember Cardinal Raymond Burke celebrated Mass for them one year: I remember it vividly because he did not use the cathedra. Later I was told he refused to ask then-Washington Cardinal Donald Wuerl for the privilege.

Cipollone also served as general counsel to the Knights of Columbus. He was on the board of the Catholic Information Center, an Opus Dei-run hotbed of conservative Catholicism located just blocks from the White House.

It will surprise no one that he has been involved with the Federalist Society, which is an incubator for Republican legal geniuses and a network largely constructed by fellow Catholic Leonard Leo. Whenever Donald Trump leaves office, his most lasting legacy may be the large number of arch-conservative judges now on the federal bench.

Cipollone may be a fine Catholic but, alas, he had some trouble with the Eighth Commandment, as former Sen. Claire McCaskill (D-Missouri) pointed out: "A lawyer does not stand in front of the Chief Justice of the Supreme Court and lie." Cipollone had said House Republicans were not permitted in the Sensitive Compartmented Information Facility, a room in the U.S. Capitol used to discuss classified information. The Republicans staged a protest outside the room for Fox News, but the GOP members of the Intelligence Committee were permitted in the room and participated in the depositions.

Sekulow is well known from his many appearances on Fox News, but he is even more of a rockstar in evangelical circles. Born Jewish, he converted to Messianic Judaism and has been called "a crusader for religious expression and a celebrity on the Christian right." He earned a doctorate from Regent University, the evangelical school founded by Pat Robertson. Many of his most high-profile cases have involved defending religious groups and individuals in cases before the Supreme Court.

Ken Starr is best known for his stint as Independent Counsel in the Whitewater investigation that led to the impeachment of Bill Clinton. But his evangelical credentials are top of the line as well. The son of a Church of Christ minister, Starr began college at a small evangelical school in Arkansas, Harding University. He transferred to George Washington University in Washington where he got his bachelor's degree. He got a master's at Brown University, and I can't imagine him on that campus, which is decidedly hippyish. His law degree is from Duke University.

After he finished up as Independent Counsel, he became dean of the law school at Pepperdine University, the Christian school in Malibu, and then went on to Baylor University, the Baptist answer to University of Notre Dame.

Cipollone's assistant White House Counsel, Patrick Philbin, is one of the president's lawyers in the impeachment hearings. In December 2001, he offered a memo as Deputy Assistant Attorney General that the federal courts lacked any jurisdiction over the detainees at Guantanamo, permitting them to be tried before military tribunals or not at all. He partially redeemed himself by supporting James Comey when they thwarted an effort to get John Ashcroft to intervene from his hospital bed to authorize warrantless wiretaps. Vice President Dick Cheney reportedly blocked Philbin for a promotion as a consequence of his support for Comey. I could not find anything on his religious affiliation. Nor could I find anything about the religious affiliation of the other lawyers on the president's team. 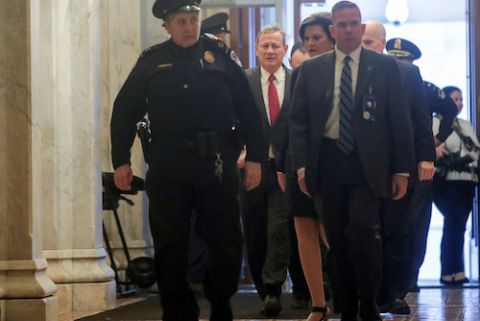 Of course, the most prominent Catholic in the impeachment proceedings is the Chief Justice of the United States. Some have hoped that he will rise to the occasion, rule in favor of hearing from witnesses, treat this trial like a typical trial, and turn himself into a typical trial judge. He won't, and I direct readers to Ruth Marcus' highly intelligent look at John Roberts.

Do these religious profiles of some of the president's lawyers matter? It is hard to tell. Whether a Catholic like Cipollone or an evangelical like Starr or a Jews for Jesus like Sekulow share any substantive religious beliefs is a question that is interesting but probably has little bearing on the current proceedings. Religions, all religions, do produce in some of their members a conviction that they, and they alone, are right, that the hostile world most be subdued and it is their task to subdue it. That plays well on Fox News, but I am not sure how it plays so well in the rest of America.

Column | Do the religious beliefs of Trump's attorneys in the impeachment trial matter?

We are living in an 'in between' time politically