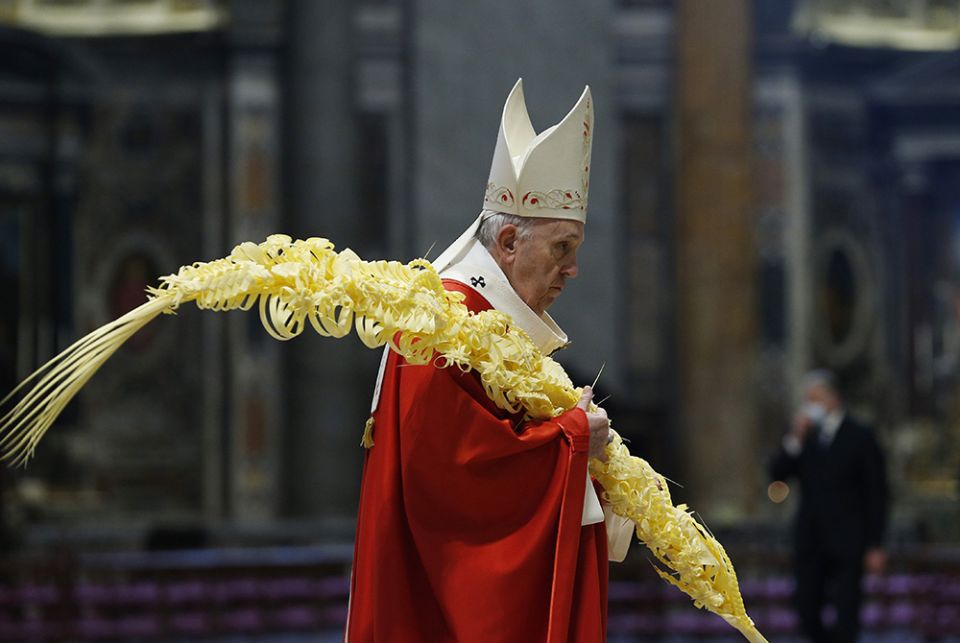 There is so much to love about Pope Francis but the thing I most love is when he gives one of those sermons that really challenge us moderns. As the church began Holy Week, the Holy Father delivered just such a sermon on Palm Sunday in which he gets to the heart of our faith and the claims it makes.

He begins by calling attention to the story of Holy Week itself and our response to it:

From the start, Jesus leaves us amazed. His people give him a solemn welcome, yet he enters Jerusalem on a lowly colt. His people expect a powerful liberator at Passover, yet he comes to bring the Passover to fulfilment by sacrificing himself. His people are hoping to triumph over the Romans by the sword, but Jesus comes to celebrate God's triumph through the cross. What happened to those people who in a few days' time went from shouting "Hosanna" to crying out "Crucify him"? What happened? They were following an idea of the Messiah rather than the Messiah. They admired Jesus, but they did not let themselves be amazed by him.

The ressourcement theology that so inspired the Second Vatican Council tried to recapture the amazement the early church fathers had expressed about the wondrous claims of our religion. They did not reduce religion to ethics. They believed in miracles. They did not confuse theology with faith: Simple people may not know much theology but they have a privileged position in accessing the faith. Where did that ressourcement impulse go?

There are many reasons, but here is one. In the post-conciliar era, our theology has been greatly affected by being brought into dialogue with the social sciences. Many insights have been gained by applying to the life of the church the insights gained from psychology and political science and sociology.

But was there a largely hidden price? If we analyze the church as a political institution, do we not tend to forget that the Holy Spirit is at work in the church? Psychology can explain many things, but its categories are not those of the Decalogue nor of the beatitudes. Sociology can tell us that millions of Catholics do not abide by a particular teaching of the magisterium, but it can tell us nothing about the veracity of that teaching.

Understanding is a good thing and we Catholics always embrace faith and reason. Luther was wrong, fideism is not the answer and ignorance is its own sad reward. Still, we should guard against any loss of wonderment that our rigorous intellectual journeys occasion, and the Easter triduum, which begins tomorrow, is the time to bolster that sense of amazement.

The pope adds: "Admiration can be worldly. … Amazement, on the other hand, remains open to others and to the newness they bring." Let us remind ourselves during this Holy Week that worldliness is a problem, perhaps the problem. Let us remember our sophomore reading of Atlas Shrugged and its hero John Galt — who was not "open to others" — and be glad we are no longer sophomores.

What is most amazing about the Lord and his Passover? It is the fact that he achieves glory through humiliation. He triumphs by accepting suffering and death, things that we, in our quest for admiration and success, would rather avoid.

I will look at this tension on Friday, when God explicitly sets forth a model of activism that is a passive activism, freely accepting suffering and humiliation. When was the last time an American embraced humiliation with dignity in order to achieve a societal or political objective?

We live in a land of overachievers and sore losers. We are a people of protests and petitions, on both left and right, but the pope's saintly namesake changed the world and reformed the church when he first kissed a leper. St. Francis founded an order that prays through the day.

We Americans are also wealthy and we have adopted the methods and the mentalities appropriate to our station. Pope Francis reminds us of how much harder it is for the affluent to be faithful when he says:

By experiencing in the flesh our deepest struggles and conflicts, he redeemed and transformed them. His love draws close to our frailty; it touches the very things of which we are most ashamed. Yet now we know that we are not alone: God is at our side in every affliction, in every fear; no evil, no sin will ever have the final word. God triumphs, but the palm of victory passes through the wood of the cross.

Left and right, we Americans do not mind being alone because we delude ourselves into thinking we are self-sufficient, right? And we have long since gotten over shame, which is such an uncomfortable emotion, Victorian really. Affliction? That is for other people.

The pope concludes by reminding us that love, a wondrous love, is the only way forward for those who call themselves Christian.

The Gospels tell us that many others before him [the centurion] had admired Jesus for his miracles and prodigious works, and had acknowledged that he was the Son of God. Yet Christ silenced them, because they risked remaining purely on the level of worldly admiration at the idea of a God to be adored and feared for his power and might. Now it can no longer be so, for at the foot of the cross there can be no mistake: God has revealed himself and reigns only with the disarmed and disarming power of love.

With all the stress the pandemic still creates for us, I am grateful that Pope Francis began Holy Week by reminding us all of the stakes of these most holy days. The Holy Father points us so powerfully towards Jesus. There is no room for complacency or self-satisfaction in the pope's evangelical vision. In the triduum, we put it all on the line as Jesus did.

My hope this Holy Week is that no one is so sophisticated, so worldly, so learned, that they have grown incapable of amazement at the events of the next three days. I hope we can all be like Pope Francis, and let our modern learning strengthen and enlighten our faith which is, in the end, quite simple, something we repeat at every Mass: We proclaim your Death, O Lord, and profess your Resurrection, until you come again.

A blessed triduum to one and all.

Column | As Francis shows, this Easter triduum there's no room for complacency