The inescapable politics of being Washington's cardinal 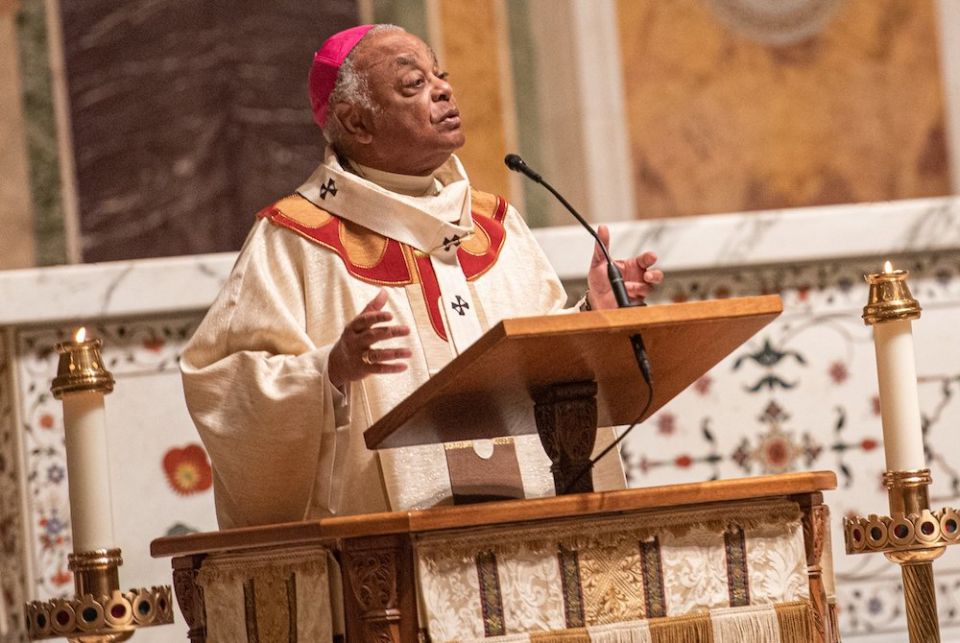 Cardinal-designate Wilton Gregory, the archbishop of Washington, gives his homily during Mass for All Saints' Day Nov. 1 at the Cathedral of St. Matthew the Apostle in Washington. (CNS/Catholic Standard/Mihoko Owada)

On Saturday, Pope Francis held a consistory at which Wilton Gregory, the archbishop of Washington, D.C., became a cardinal of the Roman Church. The honor is a personal one for Cardinal Gregory, to be sure, and an ecclesial one as well. Gregory will have the right to vote for the next pope in any conclave that occurs before he turns 80. He will doubtless be appointed to one or two Vatican dicasteries where he will assist the Holy Father in the governance of the universal church.

The political significance of the honor is obvious: As the cardinal-archbishop of the nation's capital, he becomes face of the Catholic Church in the political sphere and the natural point man for dealing with the incoming Biden administration.

The Washington Archdiocese is a relatively young diocese, born out of political necessity. From the establishment of the hierarchy in the United States in 1789 until the eve of World War II, Washington was a part of the Archdiocese of Baltimore. From the consistory of 1886 until the consistory of 1911, the Archbishop of Baltimore James Gibbons was the only cardinal in the U.S., and he was the undoubted leader of the hierarchy until his death in 1921. His successor, Archbishop Michael Curley, never attained the red hat and, what is more, as the gathering storm in Europe in the 1930s prompted President Franklin Delano Roosevelt to prepare the country for war, the Irish-born local archbishop, who detested the British in all things, proved one of the larger thorns in the president's side.

As Thomas Spalding explains in his history of the Archdiocese of Baltimore The Premier See, it was FDR who pushed for separating Washington into its own archdiocese, and his great friend in the hierarchy, Cardinal George Mundelein, the Archbishop of Chicago, supported the idea. FDR wrote to his ambassador to Italy: "Can you personally and discreetly get word to the Secretary of State of the Vatican that if it is planned to appoint a Bishop or Archbishop for Washington, I would like to emphasize the utmost importance of a close relationship with the Government at the seat of Government. … [W]ords spoken here are heard throughout the Nation." FDR even had a candidate, Bishop Bernard Sheil, Mundelein's auxiliary in Chicago.

Curley fought the idea, not wanting to see his diocese divided. The Vatican played the part of Solomon and split the baby in two: Washington would become a separate diocese, but Curley would serve as its first archbishop while retaining his job as archbishop of Baltimore. Thus, at his installation at St. Matthew's Cathedral on March 25, 1940, Curley was the archbishop of both the oldest and the youngest archdioceses in the nation.

When a friend wrote to congratulate him and float the idea that Curley would soon be made a cardinal, the crusty archbishop indicated he thought Baltimore would never again get a red hat. "There are excellent reasons why there should not be such an individual here and I thank God for these reasons because I can still hang on to a strap in the subway for a nickel and travel twenty miles," as cited in the Spalding book.

Curley died in 1947, and that autumn, Washington's first resident archbishop was appointed, Msgr. Patrick O'Boyle, director of Catholic Charities in New York at the time. O'Boyle was not as socially conscious as Sheil had been, but he was appalled by the racial segregation he encountered in his new archdiocese. Before the U.S. Supreme Court decision in Brown v. Board of Education ordered integration of the nation's public schools in 1954, O'Boyle set out to integrate the Catholic schools, starting with Catholic colleges, then high schools and finally parochial schools.

In his biography of O'Boyle, Steadfast in the Faith, Morris MacGregor tells a story about O'Boyle's determination. O'Boyle met fierce resistance, especially in the parishes of southern Maryland. A large delegation of laymen came from St. Mary's County to meet with the archbishop in August 1956, and the meeting lasted seven hours. The laymen explained that it would take at least a decade to prepare the people for such a radical change and urged him to wait until the state implemented desegregation in its schools. "Well, gentlemen," he replied, "we're going to do it tomorrow."

In 1963, when the Rev. Dr. Martin Luther King Jr. led the March on Washington, and at which he delivered his famous "I Have a Dream" speech, it was Archbishop O'Boyle who gave the opening prayer. He remained as Washington's archbishop for another 10 years and was replaced by Archbishop William Wakefield Baum, who was also soon made a cardinal, but who stayed far from politics. When he departed Washington in 1980 to take up a post at the Vatican, he joked sardonically to a mutual friend, the late Msgr. Lorenzo Albacete that during his tenure in Washington he had accomplished absolutely nothing.

Archbishop James Hickey came to Washington in 1980, as did Ronald Reagan, and while Hickey was a conservative on many issues, he clashed with the new administration over its support for military governments in Central America. Before coming to D.C., while serving as bishop of Cleveland, Hickey had commissioned a group of Catholic missionaries in El Salvador, two of whom were murdered by the military in that country the month after the election of Reagan: Sr. Dorothy Kazel and Jean Donovan. Two Maryknoll nuns were killed, too.

Although we do not have the archival records from the Vatican, it was common knowledge in Washington that the Reagan administration blocked efforts to grant Hickey a red hat for three consistories in a row. Finally, in 1988, Hickey was named a cardinal.

Hickey was also a strong supporter of organized labor and insisted that any large building projects in the archdiocese be union jobs. He cared deeply for the poor and was committed to Catholic Charities. It was he who coined the famous mission statement of the church's charitable and educational work among non-Catholics: "We don't help the poor because they're Catholic; We help them because we're Catholic." I knew him when I was a seminarian for the archdiocese, and we maintained a lively correspondence thereafter.

I was not much of a fan of Hickey's successor, Theodore McCarrick. I did not know about any beach house activities, but I knew he was glib. And he was obsessed with power and money. The first meal President George W. Bush took outside the White House after his inauguration in 2001 was at the Archdiocesan Pastoral Center. McCarrick was very public about his political meetings and was the darling of the Georgetown social circuit: Liberals embraced him as a champion of moderation at a time when the church was seen as increasingly reactionary. I always thought he was playing to the cameras.

Cardinal Donald Wuerl had plenty of meetings with politicians of both political parties, but you never read about those meetings in The Washington Post. Like Hickey, he was a champion of organized labor and gave the keynote at the second "Erroneous Autonomy" conference I helped organize, held at the AFL-CIO headquarters. My favorite commentary on that event came from Professor James Bratt, of Calvin University, who gave a presentation on Abraham Kuyper and wrote about the event at the Reformed Journal. 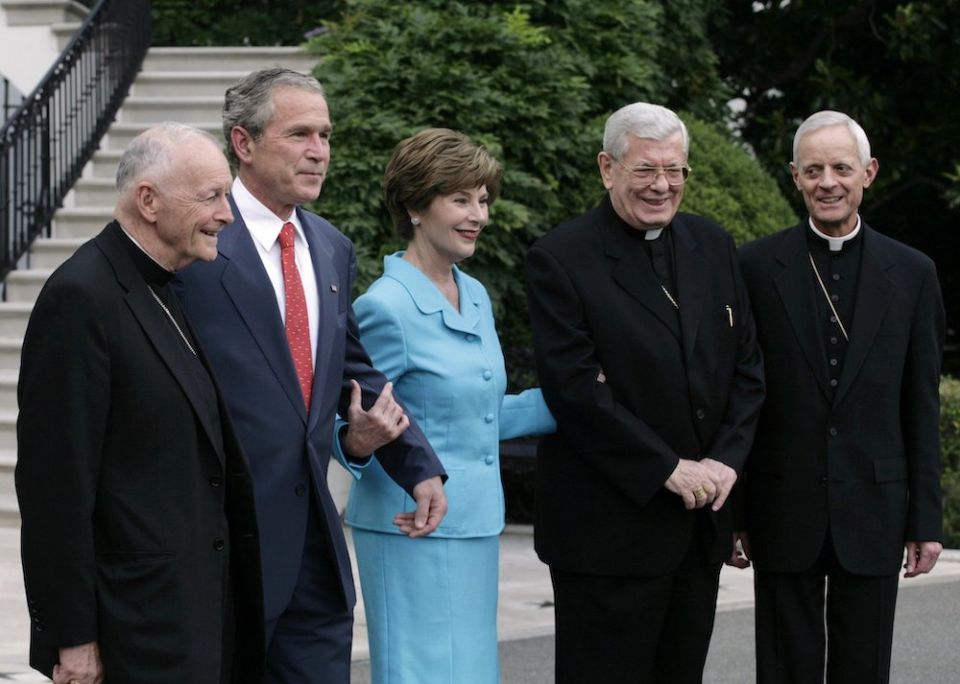 Wuerl is a formal man, and when he speaks, it is never slipshod or hasty; his thoughts are always cogent and comprehensive. He wielded much more influence in Washington than his showy predecessor because he had more moral and intellectual gravitas. If you are playing for the cameras, your influence is always competing with the Kardashians and is not likely to reflect the centuries of acquired wisdom the church brings to public matters. Wuerl never played for the cameras.

This is the legacy of political involvement by Washington's cardinals. The archdiocese is not the largest in the country, although happily it is growing, not declining. But the archbishop there is almost always a cardinal because that provides the pope with an additional avenue for contact with the occupant of the White House. In Wilton Gregory, Francis will have someone who is not afraid to defend the church's interests or its teachings, but also someone who, like Francis himself, is not going to go looking for a fight either. And, as America's first African American cardinal, Gregory becomes a key voice on race relations at a time when the entire nation is recognizing how much of a moral reckoning remains to be accomplished if we are to live out the meaning of our founding creeds.

The church is always engaged in the world. We get our hands messy. We are not Kantians. And part of that engagement involves politics. Cardinal Gregory is not afraid to preach the Gospel in season and out of season, but his aversion to the culture wars will serve the church and the country well in the years ahead. Ad multos annos!

Column | The inescapable politics of being Washington's cardinal

Maryland county withdraws restriction that would have curtailed Eucharist