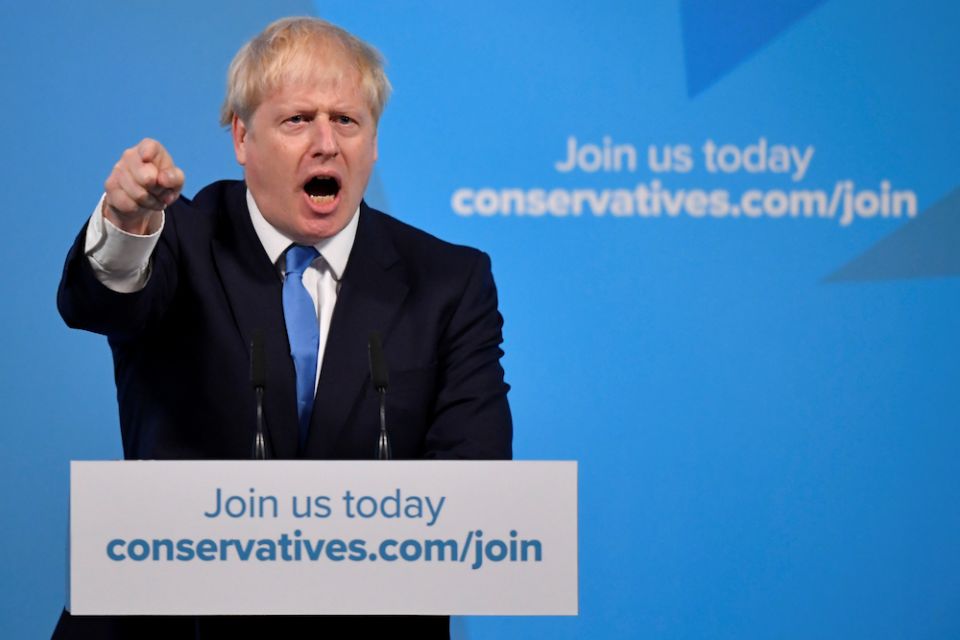 Boris Johnson speaks after being announced as Britain's new prime minister July 23 at the Queen Elizabeth II Centre in London. Johnson defeated rival Jeremy Hunt, winning two-thirds of the votes in a ballot of about 160,000 Conservative members. His Conservative Party secured a majority in Parliament in elections Dec. 12. (CNS/Reuters/Toby Melville)

I am not sure I agree with Andrew Sullivan's take on the U.K. elections, but I thought his comments about the lackluster performance by the liberal Democrats was spot on:

Then they embraced wokeness. In the last week of the campaign, their leader, Jo Swinson, got caught in long discussions about what she believes a woman is. She didn't just lose the election, she lost her own seat. It is clearer and clearer to me that the wholesale adoption of critical race, gender, and queer theory on the left makes normal people wonder what on earth they're talking about and which dictionary they are using. The white working classes are privileged? A woman can have a penis? In the end, the dogma is so crazy, and the language so bizarre, these natural left voters decided to listen to someone who does actually speak their language, even if in an absurdly plummy accent.

Much foolishness has been spoken over the weekend about what lessons the U.K. elections hold for America, such as this commentary by Hugh Hewitt. But is Sullivan's description of what happened to the liberal Dems not exactly what is happening to the Democratic Party, or at least to the class of people who run campaigns? Too woke for their own good. (More on this tomorrow.)

At Religion News Service, noted atheist Hemant Mehta didn't get the memo that while the number of atheists is growing, most Americans are still religious and value religion, so his advice to presidential candidates to demonstrate a commitment to his tendentious reading of what the Constitution requires is bad advice.

Molly Worthen is one of my favorite scholars of religion in America. I reviewed her marvelous book Apostles of Reason here, here and here. She is a professor at University of North Carolina at Chapel Hill, and her essay in The New York Times about the "faith and work movement" among many evangelicals is both frustrating and promising. Frustrating, because Catholic social teaching has plowed many of these furrows already, but I admit my heart leapt when she quoted Dave Blanchard, who runs an organization that supports Christian entrepreneurs, saying:

The line of taking Milton Friedman for everything he has to offer is falling out of favor. We're in a time when we're interrogating capitalism — a reformation project that shouldn't be confused with socialist approaches.

This is a very promising development with a long way to go.

My distaste for libertarianism is well known, but I fully support the idea being pushed by some freshman Democrats to name Rep. Justin Amash from Michigan as one of the House impeachment managers who will make the case in the Senate trial. Amash, an avowed libertarian, left the GOP after the Mueller report convinced him the president had obstructed justice. And once the John F. Kennedy Library determines a methodology for rescinding a "Profile in Courage" award, they can give Amash the one they need to take back from Sen. Lindsay Graham.