Religious voices are the voices of reason on migration 'crisis' 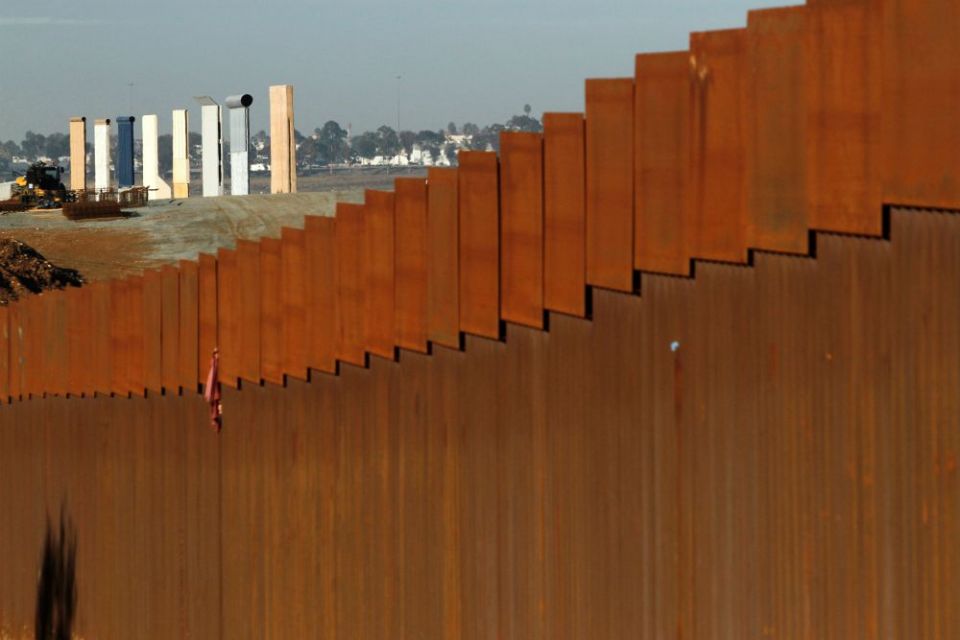 The prototypes for the border wall proposed by U.S. President Donald Trump are seen in a photo taken from Tijuana, Mexico, Jan. 7 behind an existing barrier at the border between Mexico and the United States. (CNS/Reuters/Jorge Duenes)

These men, women and children are neither numbers, nor criminal statistics, but flesh and blood people with their own stories and histories. Most are fleeing human misery and brutal violence that threatens their lives. False and fear-filled caricatures seek to provoke a sort of amnesia that would have this great nation deny our roots in immigrants and refugees.

Dehumanization indeed. As one wag said to me yesterday, he was surprised the president did not use the word untermensch.

"I am energized each day by the families I meet, especially the children. I am energized as well by the volunteers," writes Missionaries of Jesus Sr. Norma Pimentel, who directs Catholic Charities in the Rio Grande Valley, in yesterday's Washington Post.

They come from our local communities but also from across the United States. We witness daily how, working together, people of all faiths can focus on helping the person in front of us. Regardless of who we are and where we came from, we remain part of the human family and are called to live in solidarity with one another.

What Sister sees, and the president does not, is that people can come together to alleviate human suffering, but then Sister is not a narcissist.

"The human tragedy at our border, where thousands of children and families are fleeing persecution and violence from the Northern Triangle countries of Guatemala, Honduras, and El Salvador, is where this administration and Congress should focus its attention," said Donald Kerwin, executive director of the Center for Migration Studies, in a statement released after Trump's short speech.

A series of measures designed to deter these vulnerable populations from fleeing their countries, including family separation, mandatory detention, zero tolerance, and denial of entry at the border are undermining their legal and human rights, guaranteed under both domestic and international law. They are handing themselves over to Border Patrol agents in search of protection, not trying to enter the country illegally. The Administration and Congress should act to end these inhumane policies and provide protection to vulnerable women and children.

The "crisis" the president speaks about is largely one of his own making.

"Mothers and children are fleeing the very criminal elements that we ourselves recognize represent a mortal danger," wrote Bishop Daniel Flores in a tweet. "Are we not capable of sustaining a response that both protects the vulnerable and restrains the menace?" Imagine that: someone who suggests we do more than throw up our hands first, and then throw up a wall, and actually try and solve this.

"The right to seek refuge and asylum in the face of a 'well-founded fear' of persecution is a cornerstone of the contemporary international order," states "Sealing the Border: The Criminalization of Asylum Seekers in the Trump Era," a report from the Hope Border Institute issued last year.

This right has been central to legal, ethical, moral and religious discourse and practices embedded in conceptualizations of fundamental rights, duties and responsibilities throughout the world, and reflected in diverse faith and cultural traditions for centuries. … The Trump administration's policies reverse and constrain the exercise of discretion and impose an approach which increases the vulnerability of asylum seekers and undocumented immigrants seeking to enter or already living in the U.S., without regard to rights to humanitarian protection or community ties or contributions. The policies and practices of the Trump administration in effect presume the illegitimacy of bona fide claims of asylum, especially in the borderlands. All of this has a disproportionate impact on migrants and asylum seekers of Mexican and Central American origin, and particularly on children, women and families. This represents both a violation of national and international law as well as of fundamental principles of justice and fairness.

Read the whole report, which is a textbook case in how the powerful can abuse the powerless with impunity, turning the Beatitudes on their head.

These religious voices are, in the event, also the voices of reason. The hyperventilating coming from the White House and Fox News is only the most recent example of the oldest political trick in the book: When in trouble, find a scapegoat.

In the 1950s, social psychologist Muzafer Sherif conducted a famous experiment with teenage boys in Oklahoma. The boys were taken to a camp and divided into two groups, the Rattlers and the Eagles. Team-building exercises were conducted within the two groups and none were conducted between the two groups. They then had the two teams compete. "The experimenters documented a rapidly escalating sense of mutual enmity among the boys and a growing desperation on both sides to win the contests," write Marc Hetherington and Jonathan Weiler in their new book Prius or Pickup? How the Answers to Four Simple Questions Explain America's Great Divide. (A review of the book is forthcoming here at "Distinctly Catholic.")

Trump and his team are treating the American people the way Sherif treated the boys in Oklahoma. It may work with some, and it may work for awhile, but it will not work in the long run. Because, in addition to the voices of religious leaders on this subject of treating migrants, God himself has spoken on the subject at Exodus 22:21: "You shall not wrong a stranger or oppress him, for you were strangers in the land of Egypt."

Column | Religious voices are the voices of reason on migration 'crisis'

In Washington, refugees from around U.S. lobby for federal program